While art can often be enjoyed solely for its aesthetic or synchronicity, ASU's newest art exhibit highlights a different purpose: Art as a vessel for change.

The touring exhibit, titled "Talking to Action: Art, Pedagogy, and Activism in the Americas," is now at ASU Art Museum and features art, film and other medias centered around the themes of contemporary art and social reform.

The exhibit aims to present art from different countries in a context where it can be engaged and continually debated and discussed, rather than just appreciated for its aesthetic qualities, said Bill Kelley Jr., curator and lead researcher for the exhibit.

The exhibit highlights how closely linked art and social change have been throughout history.

“I don't know if I can imagine activism without art, because in order to reimagine solutions to complex problems … you need creative thinking,” Kelley said. “You're not going to change the world unless you think.”

Sandra de la Loza, a Los Angeles-based artist who is collaborating with Eduardo Molinari in the exhibit to illustrate the social justice efforts to fight gentrification in their communities, said art can reflect on the past in ways that can enact change in the present day.

“We’re not interested in the past or history for mere nostalgia” said de la Loza, who specializes in archives. “We’re definitely interested in how the past lives with us and also how the past can inform and reveal the present and even suggest a future.” 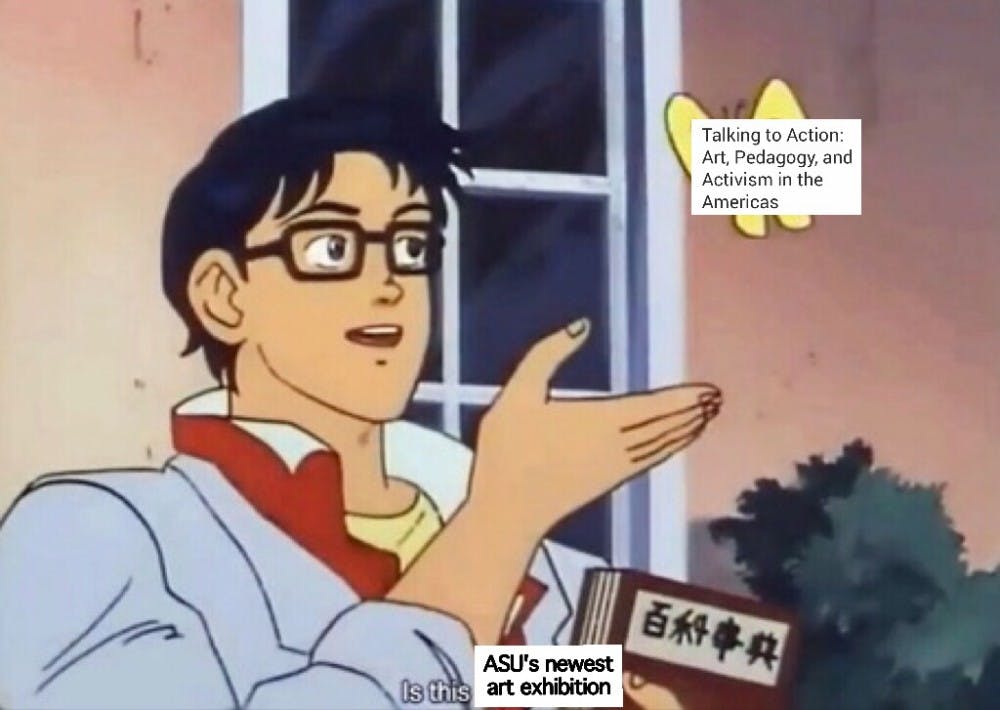 Another central theme in the exhibit is pedagogy — which refers to the art, science or profession of teaching — because learning is so fundamental to the practice of art and can have unexpected impacts in the modern world, Kelley said.

Michele Jaquis, the director of interdisciplinary studies at Otis College of Art and Design where the exhibit was organized, said one of the artists featured in the exhibit used his art to explore how different teachings of certain words can lead people to understand the words differently based on culture or context.

Taniel Morales from Mexico City recorded interviews with people from his hometown and Los Angeles, and asked them how they understood certain words, like "frontera," the Spanish word for "border."

For Spanish-speaking people who knew the direct translation, they viewed the word with a negative connotation, Jaquis said. But for those who did not know the meaning, she said they would associate it with the word "frontier," perceiving the word in a more positive light.

These interviews, along with other archival material with similar messages of activism, will be presented at this exhibit, which is free for all ASU students.

De la Loza said she considers herself someone who is active in community struggles and creative actions.

"Creativity is a big part of those actions," she said. "I'm also an artist who creates work that circulate in museums and art galleries and art institutions. Sometimes those things overlap and sometimes they don't. It definitely, in this installation, it all comes together."

The exhibit will be open at the ASU Art Museum from Feb. 9 through July 6.