Should you be psyched about psychedelics?

MDMA can offer more than trippy hallucinations and dehydration — it can be therapeutic to people with mental illness, according to an activist married couple.

Tempe is home to one of eight accredited Naturopathic schools in the U.S. and was the location of the first ever 2019 Arizona Psychedelic Conference.

The Conference was held by married couple Ray and Amanda Ryskowski from Feb. 8 to 10 at the Southwest College of Naturopathic Medicine & Health Sciences.

Amanda Ryskowski is a third-year student at SCNM and started the Entheogenic Research Awareness club there two years ago. Ray Ryskowski is a disabled veteran who suffered from post traumatic stress disorder. He said he was a cannabis advocate before travelling to Peru, where he worked with ayahuasca and found healing for his PTSD in 2014.

Ray Ryskowski said that the conference was something he's wanted to organize ever since.

“We’ve been working up to the conference for years with our goal being to build community and trying to maintain a balanced and educational perspective on psychedelic medicines,” Amanda Ryskowski said.

Over the course of the three-day conference, 47 speakers discussed the therapeutic potential of psychedelics such as psilocybin, ayahuasca, peyote, MDMA, DMT, ibogaine, ketamine, cannabis and more through a series of panel discussions, presentations and workshops.

“Recently, there’s been a renaissance of interest in researching psychedelics and how they are misunderstood drugs with great therapeutic potential,” Amanda Ryskowski said. “New research and clinical trials with MDMA and psilocybin are proving to be a lot better than most current medical treatment options.”

Amanda Ryskowski said that after one to three treatment sessions, some people are no longer diagnosable with certain psychological disorders.

“Both MDMA and psilocybin have been labeled breakthrough therapies by the FDA and will become a legal option in the future so it's important we brought that conversation here,” she said.

With MDMA and psilocybin both designated as breakthrough therapies by the FDA (for PTSD and major depression, respectively), we are about to see huge changes in treatment options for mental healthcare. #psychedelic #medicine #mentalhealth #Healing #azpsychedelics

In Phoenix and Flagstaff, MDMA is going to be available through Sue Sisely who is opening up a treatment center under expanded access with the Multidisciplinary Association for Psychedelic Studies, Ray Ryskowski said.

The conference cost approximately $60,000 to $70,000, he said, but he and his wife also received some help on the financial front. The Ecstasis Club and The Pat Tillman Veterans Center at ASU helped sponsor the conference.

Broussard said they went through the Undergraduate Student Government appropriations and managed to get $10,000 to pay for speakers and a professional videography and photography team.

Broussard and the other two co-founders including attended the conference along with 10 other members of the club who volunteered to work at the conference.

“I feel like the Arizona Psychedelic Conference aligns with our club’s view in regard to promoting and helping understand therapeutic and research potential of psychedelic substances,” Broussard said. “We’ve worked with Ray and Amanda (Ryskowski) in the past, and we were on board from the get-go to help with our sponsorship and volunteer work.” 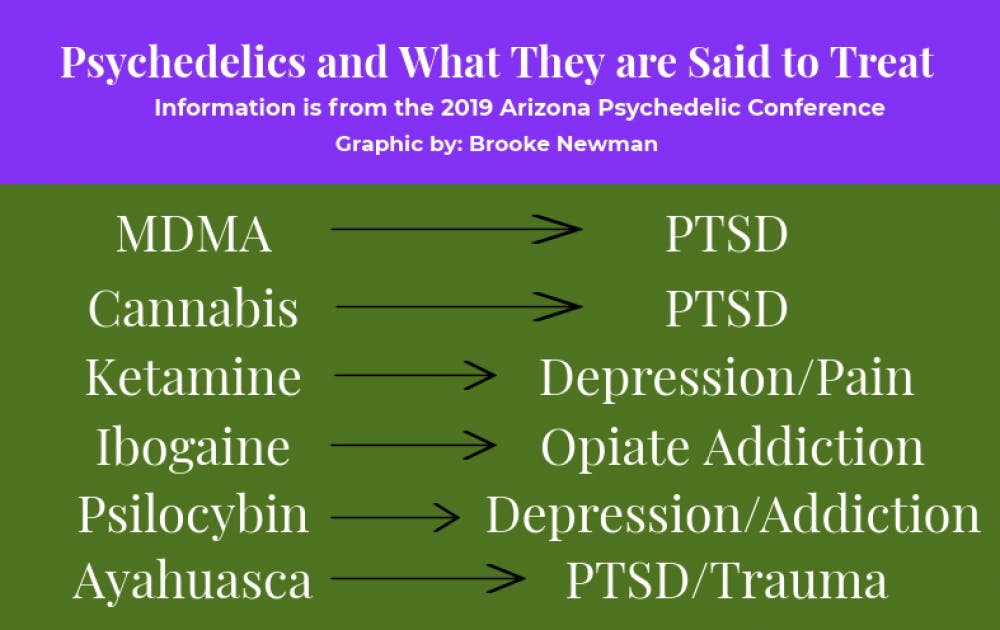 "Psychedelics is said to treat a variety of mental health problems." Illustration published on Thursday, Feb. 14, 2019.

Nancy Dallett, an associate director with the Office for Veteran and Military Academic Engagement, said they donated $1,000 to help with whatever the Ryskowskis needed.

The Office decided to sponsor the conference in December and received eight discounted tickets for Dallett and other faculty members to use.

After this working with the Ryskowskis at a previous film screening event, Dallett said she saw it fit to sponsor the conference.

In the closing ceremony, Amanda Ryskowski thanked ASU for its support and sponsorship.

“Our goal was education and bringing it to the state of Arizona and to my naturopathic medical community,” Amanda Ryskowski said. “We wanted to organize a conference that maintained a high level of professionalism while integrating a diverse range of perspectives."

Ray Ryskowski said that entheogens can offer healing that won't be found in traditional medicine.

"It means real healing," he said. "People lose so much of their lives to mental health issues."