With only 16 percent of artists having a bachelor’s degree in an arts-related field, according to a study from artist collective BFAMFAPhD, several ASU departments are partnering with a local gallery to promote arts education.

Access ASU, ASU Community Outreach, ASU Gammage and Xico, Inc. are working together on the inaugural event of the new Community Education Dialogue series. While the overall series will invite working professionals in various fields to speak to students and community members, the first event will feature prominent artists to show students how they can use their arts degree to land a job.

The first panel will take place on Wednesday, Feb. 13, and will feature speakers Martha Gonzalez and Diana Calderon. The artists will discuss how pursuing a traditional arts education shaped their careers.

Calderon, a visual artist and educator, said that she always viewed her education as a vital part of her career as an artist.

“I think that we need to study art and education because that's how we learn about ourselves and other cultures,” Calderon said. “It stretches our mind beyond boundaries, and it teaches us the importance of problem solving and coping skills.”

She said she hopes to teach the community of the resources available when pursuing an arts degree.

“People perceive an education in the arts like a luxury or a pastime or a hobby.” Calderon said. “You can change the world through art because it strengthens individuals and communities.” 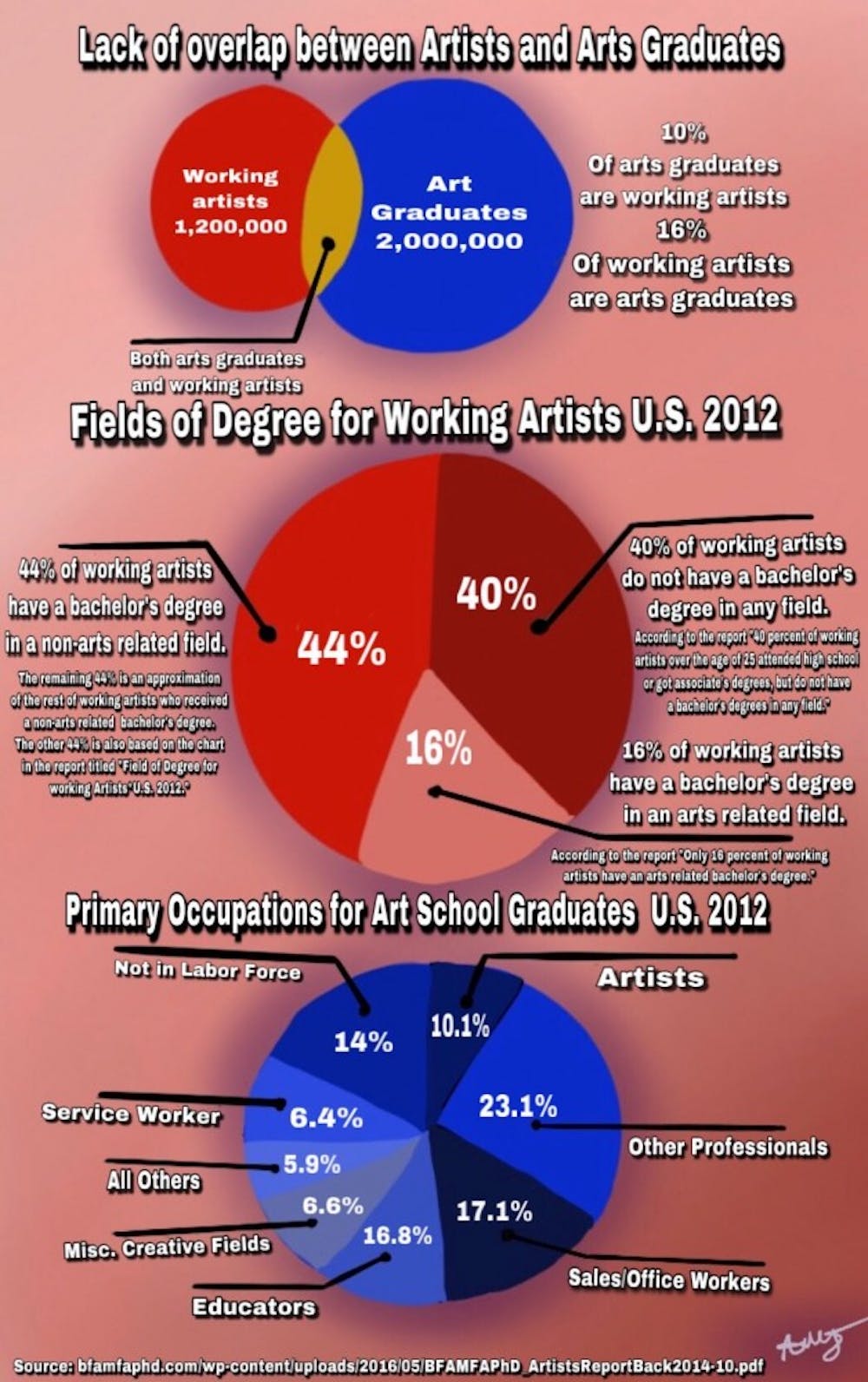 Marcelino Quinonez, the director of educational outreach and partnerships within Access ASU's community sector, said the purpose of the discussion series is to give attendees perspective from accomplished professionals in their respective fields.

Quinonez said Gonzalez, who is the ASU Gammage guest residency artist and an assistant professor of Chicana/o Latina/o Studies at Scripps College, is a good role model for students as she's a Grammy Award winner for the band Quetzal.

“They have really unique perspectives that I believe will inspire a lot of individuals” Quinonez said.

Steven Tepper, dean and professor at the Herberger Institute for Design and the Arts, said the event will bring awareness to the lack of engagement with the arts, which he said begins as early as a student’s primary education.

“I think the conditions for schools often lead to making decisions around resources that optimize tests and other standards at the expense of the arts.” Tepper said, “I think that is short-sighted because of all the evidence that the arts are powerful ways for students to learn and stay engaged.”

Tepper said he was involved in research of his own, which showed that arts students can be hopeful when it comes to their post-graduate futures.

“We've done a lot of research and surveyed over 200,000 arts graduates," he said. "We know that their employment rates are the same (as other degrees), and they tend to be happier in their jobs."

He said he is confident that ASU has and will continue to garner high satisfaction rates from post-graduate arts majors.

“Most of our graduates say that, even if they don't end up in a full-time job related to the arts, they feel like their education is relevant to what they do and feel like an arts education prepares them to bring creativity into lots of different arenas of work,” Tepper said.

“The ability to be creative in a job makes us happier so there tends to be pretty high satisfaction rates regardless of the career paths that artists take," he said.

The first event in the Community Education Dialogue Series will be hosted at Xico Gallery in Phoenix on Feb. 13 from 6:30 p.m. to 8 p.m.

Correction: A previous version of this article incorrectly stated that Martha Gonzalez was a former professor from the University of Washington. Gonzalez received her doctoral degree from the University of Washington, but was not a professor there. The article also omitted that she is the ASU Gammage guest residency artist and an assistant professor of Chicana/o Latina/o Studies at Scripps College. The article has been updated to reflect the changes.