The price of 'The Sun Devil Experience'

With a $400,000 programming budget, PAB plans and executes daily free events for students

A screening of an Oscar-nominated film on Monday, a '70s-themed arcade night on Tuesday, ice skating in downtown Phoenix on Wednesday and, oh yeah, a concert featuring a headliner with almost 12 million monthly listeners on Spotify on Saturday.

With no catch and at no cost to event-goers — at least not directly — ASU’s Programming and Activities Board fills students' calendars with free, on-campus events throughout the month, all year long.

As the board's reach has grown over the past several years, its budget has grown along with it. And it's no coincidence: large universities nationwide are coming to realize that students want more out of their campus than an education and some branded sweatshirts. They want, at least in ASU's case, the "Sun Devil Experience."

That's what PAB President and junior business major Gloria LaBrash said her organization's goal is — to create an encompassing student experience characterized by Sun Devil spirit, pride and tradition, all funded in some way or another by the University.

“We have the ability and privilege to take ideas from students and resources we have provided through the University to create some of ASU’s most memorable moments,” LaBrash said.

As its name would suggest, PAB works to shape the student experience at the University through programming and activities. They are responsible for bringing many of ASU’s signature events to life, including Devils on Mill, Homecoming and Devilpalooza.

The student-run organization, which has branches on all four campuses, is split into 11 departments. Ranging widely in focus, some departments such as the marketing and finance departments strategize with other departments that zero in on specific events such as Devilpalooza or Third Thursdays.

Supported by hundreds of thousands of University dollars, the organization is tasked with creating on-campus events that promote ASU's values, LaBrash said.

She said throughout her time with PAB, the organization’s capacity and accomplishments have expanded.

“The University administration has provided us with more opportunities to plan more and bigger events to make the best experience possible for Sun Devils,” LaBrash said.

With the additional resources, such as its new, energy-efficient space in the Student Pavilion, PAB expanded to cover events like the MU Takeover, MU After Dark and Devils on Mill, which formerly did not fall under the PAB umbrella.

The organization also expanded its relationships with other clubs through the PAB production team, a specialized crew that can be rented out by any ASU-affiliated organization or individual to enhance the ambience of an event through lighting, sound and production tech.

Who pays for the Sun Devil Experience?

The mechanical skateboard at PAB's '70s arcade night and grilled chicken in T-Pain’s dressing room doesn’t magically appear at the right place and the right time. LaBrash said every event requires meticulous planning, advanced strategy and, of course, money — in some cases, hundreds of thousands of dollars.

LaBrash said as the organization has grown, the operating budget has grown with it.

The total budget allocated to PAB for the 2018-19 school year is more than $480,000 and pays for staff stipends and event costs. With a similar budget the year prior, PAB programmed more than 150 events with a total attendance at 105,000 students, LaBash said.

The operating budget is allocated through student government and comes from funds from the Student Programs Fee — a $30 semesterly fee used “to generate value added programming,” according to the University’s website. Since the fee's implementation in 2008, it has been raised once from the original $25. Aside from funding PAB, the fee also pays for travel costs and other club events. 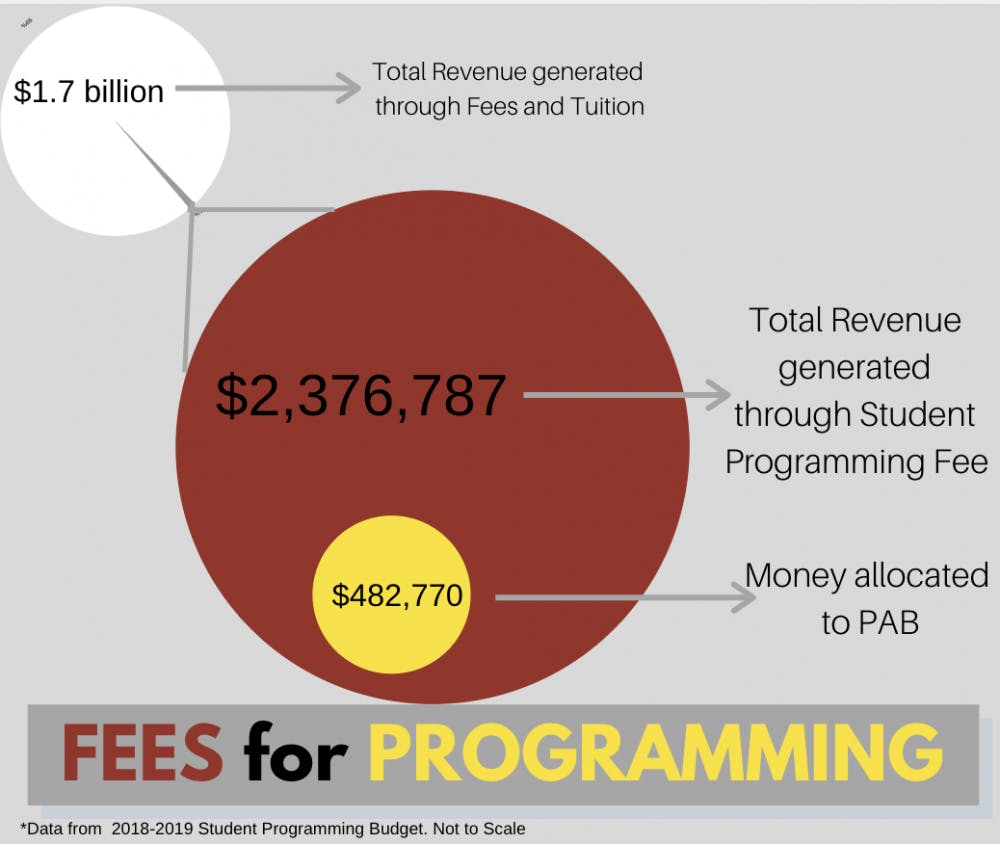 The larger events such as Homecoming and most of Devilpalooza are funded separately with funds allocated from the Vice President’s Office.

Educational Outreach and Student Services did not respond for comment in time for publication.

“The funding helps us keep these events at the grandeur level that they are now,” LaBrash said.

PAB supplements the funds it gets through the University's Educational Outreach and Student Services office with revenues it generates through campus tours and from vendors at events. LaBrash said the 20 vendors at Devilpalooza 2019 contributed to a "significant chunk" of the event budget.

"We try to be as responsible as we can, so we try to generate as much internal revenue as possible," LaBrash said.

Every year, PAB budgets $225,000 for Devilpalooza alone. LaBrash said by the time the event is over, there is rarely any money leftover.

"Because we are so privileged to have the amount of funding that we do we try to enhance our budget to make the most of every dollar," LaBrash said.

The cost to bring Rae Sremmurd in 2017 and T-Pain in 2018 was $190,000, including the cost of the artist and their hospitality requests but also production elements such as the stage, lighting, sound, roof and labor associated with the event. The additional $35,000 pays for the less sexy aspects of the event such as portable toilets and fencing.

Read more: Which past Devilpalooza headliner should you hang out with backstage?

Some of ASU's peer universities have far steeper costs for student programming.

For example, students at Florida State University pay at $12.86 per credit hour for FSU's Activities and Services Fee.

Those funds are then allocated through the Student Union’s budget which sits at about $4.7 million for the 2018-19 academic year. Homecoming was funded independently and had a $310,000 operations budget this year.

A student taking 15 credit hours at FSU would pay almost $200 for student activities, whereas a student at ASU taking the same amount of hours would still only pay the $30 per semester fee.

Across the nation, the same narrative holds true: Big universities scrape together big budgets in hopes of attracting students through glitzy productions.

A 2018 study from the Journal of Labor Economics called “College as Country Club” suggests this is what larger public universities are doing to cater to student demand for amenities such as activities and high-class dormitories. Big universities like ASU, the study says, are especially likely to look at student activities from a market perspective. Upping the student activity game has become a standard for modern universities, the study suggests.

“ASU’s activity fee is exceptionally low, one of the lowest in the nation,” Davis said. “Students here get a lot out of the programming fee when you think about it.”

Its value is recognized within and outside of the University, he said.

LaBrash said PAB's efforts are often recognized within the ASU community in the form of awards and University support. PAB took home three 2018 Pitchfork Awards and contributed to several others.

"It is reassuring and exciting to see the impact that we make on the University and other student organizations," LaBrash said. "We are blessed to be acknowledged and recognized among the University's administration." 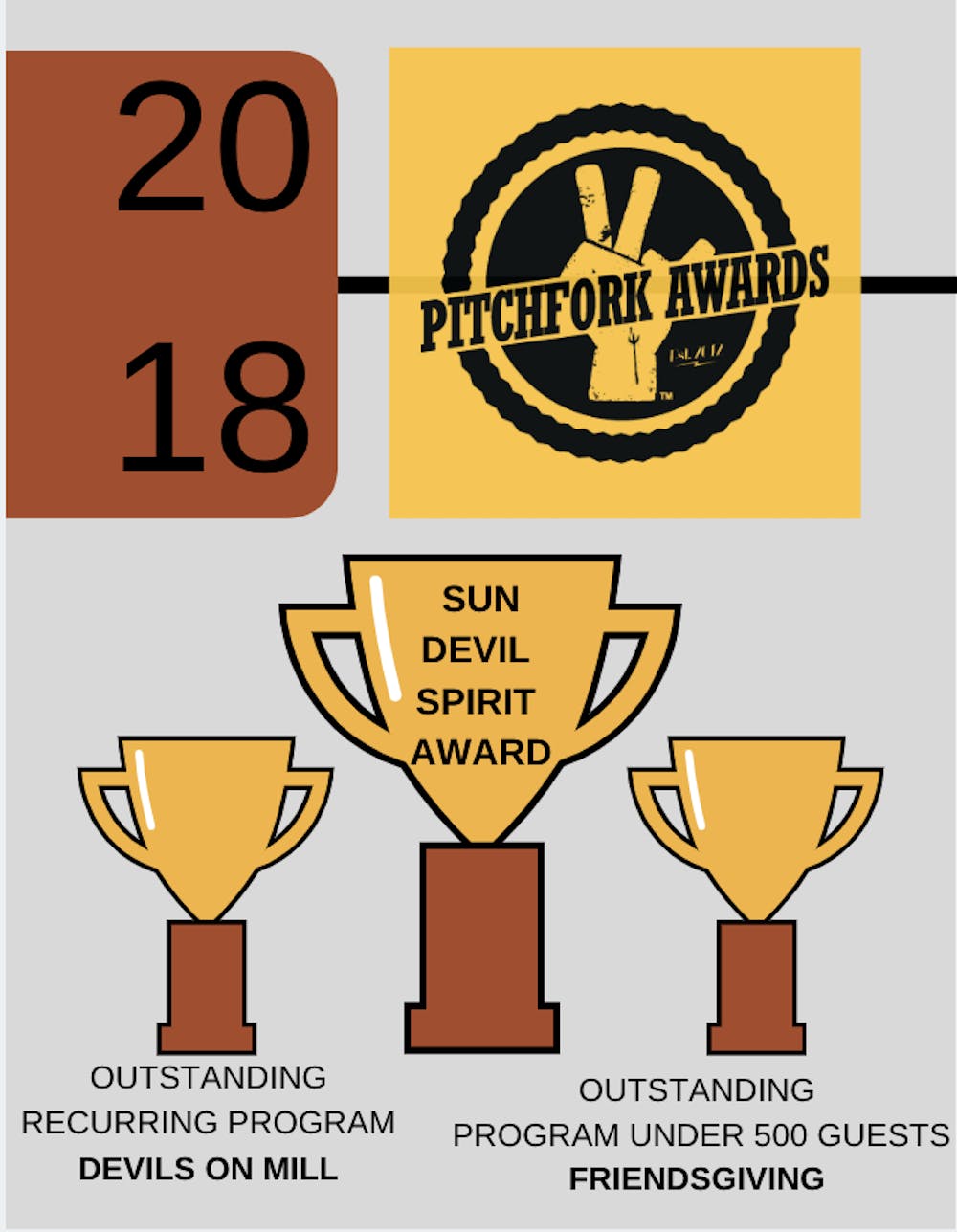 Individuals connected with PAB have also received awards through the National Association of Campus Activities. Other institutions look toward ASU’s PAB as an example. Members of Ohio State University's programming board attended the 2018 Devilpalooza and people from other universities consistently comment about PAB’s success, LaBrash said.

"We have things here that no other Universities have and the experience we have here is exceptional," she said, adding that ASU's late-night programming is "nationally renowned for its kind."

LaBrash said PAB prides itself on providing something students to do outside of their classes every day of the week.

"We are blessed to be acknowledged and recognized among the University's administration as an important part of the student experience," LaBrash said. “We create the events that people will think about when they reflect upon their experience at ASU."