How helpful is Barrett in helping students pursue graduate school?

Grad schools, ASU students and University officials share their takes on the importance of an honors college

Barrett, the Honors College recently proposed a fee increase of $250, raising the fee to attend the program to $1,000 per semester and causing controversy among its students.

While Barrett, the Honors College says that it offers amenities that are extremely beneficial to its students, there have been mixed reactions among graduate programs about whether or not an honors college is on their lists of priorities when considering a student’s application.

The University said that the cost increases go toward amenities and resources to support honors students.

"The Barrett honors college has an expense budget setting aside anything associated with expansion, which is beyond what we thought we could continue to socialize across the rest of the student body,” ASU President Michael Crow said in a meeting with The State Press. "It goes basically to the core support that Barrett students have access to. Barrett students might not use it all, but they have access to tremendous support and that support costs resources."

But following the fee increase proposal, many students are questioning whether or not they want to stay in the school. The controversy also reignited debate about how effective Barrett is in helping students pursue postgraduate education.

Jennifer Bessette, senior admissions counselor at the Midwestern Physician Assistant program in Glendale, Ariz., said via email that being “part of an honors college does not impact an applicant’s consideration in any way.”

“When applying to PA school, the most important factors are a strong science and overall GPA, strong GRE and paid patient care experiences,” Bessette said in the email.

Nicole Greason, the Barrett public relations and marketing manager, said students in the honors college have access to many amenities that non-honors students do not.

“In addition to that, we feel that the added value is the assistance that they receive in terms of finding and getting internships, research opportunities and jobs," Greason said.

She said that Barrett employs a full-time internship and research coordinator and that the coordinator helps with resumes, career exploration, networking and more.

“And then beyond that, that person also assists students who are at the point where they’re going to be applying for jobs and helps prepare them for that too," she said.

Tanisha Price-Johnson, executive director of admissions and director of the pre-medical admissions pathway for UA College of Medicine, said that the admissions departments pay attention to whether or not someone has had an honors experience, but it's not make-or-break.

"One of the things that we pay attention to in terms of medical school admissions is the rigor of your academic foundation," Price-Johnson said.

She said that being in an honors college can help show a student's academic rigor.

"I think it adds value to the application, but again, I think the overall holistic approach to reviewing applicants is really important," she said. 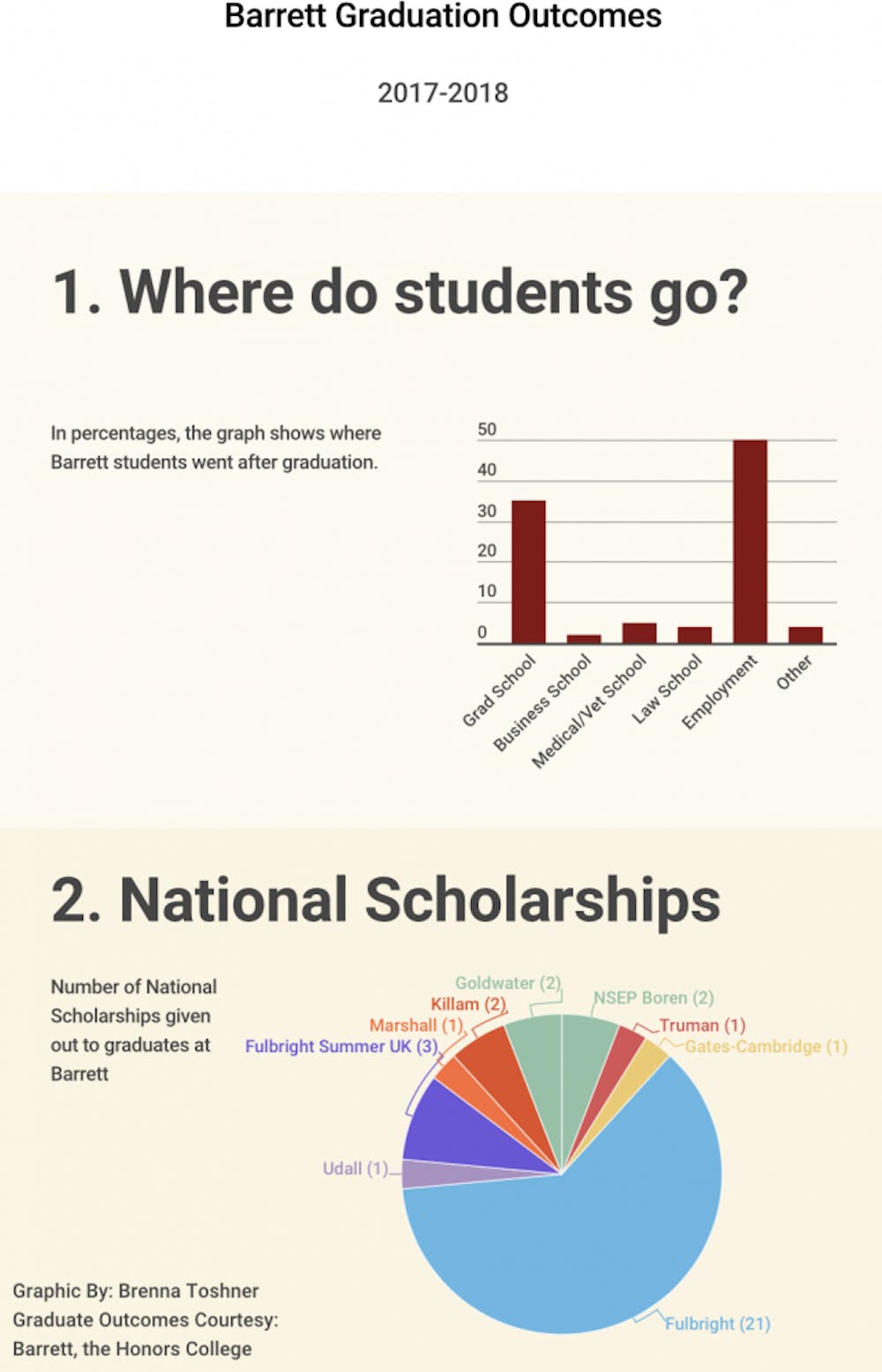 Bessette listed other factors the program considers, none of which were an honors college.

“Having extracurricular activities, community service and employment that are both healthcare and non-healthcare related are important to showing you are a well-rounded applicant," she said.

An admissions representative from Northwestern’s Kellogg School of Management said via email that the school's admissions committee does a thorough evaluation of applications, which includes reviewing various aspects of a student’s application.

“Although we do evaluate test scores, scholastic ability and work experience, we are also interested in learning more about one’s values and motivations,” she said. “We also assess other characteristics, such as maturity, leadership, personal character and potential contribution to the Kellogg community.”

The admissions representative also said that the process is subjective and “takes into consideration many factors beyond data points, (and we) cannot surmise one’s chances for acceptance based on test scores, previous academic record and work experience alone.”

Dylan Renner, an ASU junior majoring in civil engineering, said he was in Barrett but decided to drop it.

Renner said that he has an internship and doesn't think that going through Barrett would be necessary for what he wants to do. Although, he said he does think that Barrett can be beneficial for students who want to go to graduate school or get a doctoral degree.

"In terms of going to grad school and even Ph.D., yeah I think it would be good to have a thesis down," he said.

Renner said that if you want to challenge yourself and utilize the resources that Barrett offers, it can be worthwhile. But he said that he thinks most kids "are just there because they were honors kids in high school and were like, 'Hey, I'm going to do Barrett because I'm a smart kid.'"

Greason said she has talked with many Barrett students and that many of them say Barrett has overall, been a benefit for them.

“Overall, they tell me that it has been a benefit for them to do an honors thesis and to do hands on practical research as undergraduates, and that when they talked to folks when they're applying for jobs or interviewing to get into graduate school, that does give them a leg up."

“While some students weren't pursuing graduate school, they still valued that they had the opportunity to be trained in critical thinking, research, speaking and writing, and those things were very valuable to them in their job search and in obtaining employment," she said.

Correction: A previous version of this article incorrectly referred to graduate school as secondary education in the title and unclearly described the proposed fee increase in the first paragraph. The article has been updated to reflect the changes.