Hundreds packed into a ballroom in the Memorial Union on Wednesday night, donning “MAGA” hats and cheering in anticipation of a speech by controversial conservative figure Charlie Kirk.

Kirk is the founder and executive director of Turning Point USA, a non-profit and ostensibly non-partisan political advocacy group that promotes the benefits of free markets and limited government to college campuses.

The event, cosponsored by Young Americans for Liberty, was part of TPUSA’s "Campus Clash" tour. The tour brings Kirk and fellow conservative commentator Candace Owens — recently in the news for controversial statements about Adolf Hitler — to colleges nationwide.

While the tour and figures associated with it are popular among conservative students, Kirk and Owens, who did not attend Wednesday’s event citing illness, are frequent targets of progressive criticism.

And they’re not alone. College campuses have become popular destinations for conservative groups who have portrayed academia as a bastion of liberal ideals.

Ashton Blaise Whitty, better known by her online handle ashtonbirdie, and Tim Gionet came to campus on Monday at the invitation of ASU’s chapter of College Republicans United, a far-right spin-off from the more mainstream College Republicans.

Gionet, or "Baked Alaska" in his online presence, accompanied her as a cameraman, the club said. Gionet rose to prominence as an alt-right troll who frequently tweeted references to white nationalism.

The events come the same week that President Donald Trump issued an executive order that would set up measures to take away federal funds for colleges and universities if they fail to comply with free speech standards.

The order, issued on Thursday, follows multiple instances of colleges and universities barring controversial conservative speakers from hosting events on their campuses. Among them is a recent incident involving conservative pundit Ben Shapiro, who was first banned from and later re-invited to speak on Grand Canyon University’s campus in February.

“ASU generally is pretty good … the University was pretty nice to us,” Moore said. “ASU was good with helping us out and making sure everything ran smoothly with the event.”

The bulk of the program was spent in a question-and-answer session led by Kirk in which he encouraged dissent, asking those who disagreed with him to go to the front of the line to speak.

Kaitlyn Holtsoi, a member of the Navajo Nation and a sophomore majoring in political science and American Indian studies, opened her question by acknowledging that the event was being held on indigenous land.

At a point in the event, Holtsoi said Kirk referred to Sen. Elizabeth Warren (D-Mass.) as Pocahontas, a term Trump has called Warren.

"I had never been around so many Trump supporters in my life and in that moment I felt so small," she said. "That is also the moment I knew I had to say something if I had the chance."

Another student asked about climate change and was met with boos from the audience.

Kirk, who had earlier discouraged the audience from verbally dissenting with those asking questions, told the audience that “we respect all opinions, even if they’re not correct.”

Kirk took various questions from the audience, but often cut off the speaker when he had a point that contradicted that of the audience member.

Moore said that it was beneficial for students to get their "ideas and questions out to Charlie" and that "even if they disagree with him, at least seeing the other side can add to what (they) think politically."

While Monday's event was decidedly smaller than the "Campus Clash" event on Wednesday, it drew more controversy on social media.

ASU pretends that it doesn't have a problem with racism while literally giving money and resources to white supremacist organizations on campus. https://t.co/J779i65sU9

Students and campus organizations on social media criticized the speaking event, saying that the club was giving a platform to alt-right extremists and broadcasting white supremacist values.

“His (Gionet) background is very much in doing inflammatory and openly white supremacist work,” said Camden Paillot, a sophomore majoring in sustainability and a member of ASU’s Young Democratic Socialists of America. “I just think it's insane that these people would be allowed on to a university space.”

Gionet was also among members of several far-right and neo-Nazi groups who planned the white supremacist Unite the Right rally in Charlottesville, Va., last year.

Adding to the controversy was a photo that the group posted on Twitter following the event showed. The photo showed both Gionet and Whitty posing with the club's members, including someone holding up what many on social media viewed as a white power sign. The tweet has since been deleted.

Joshua Bernard, a senior majoring in political science and the president of College Republicans United, said in an emailed statement that Gionet was not specifically invited to speak at the meeting.

"Baked Alaska was not invited to speak at CRU, our club invited Ashton Blaise Whitty who then brought her boyfriend (Gionet) to man her video camera," Bernard wrote. "The event was livestreamed on Ashton's Youtube account."

Despite Bernard's statement, a post on the club's OrgSync page from Feb. 9, 2019 describes plans to host both Whitty and Gionet at that night's meeting. 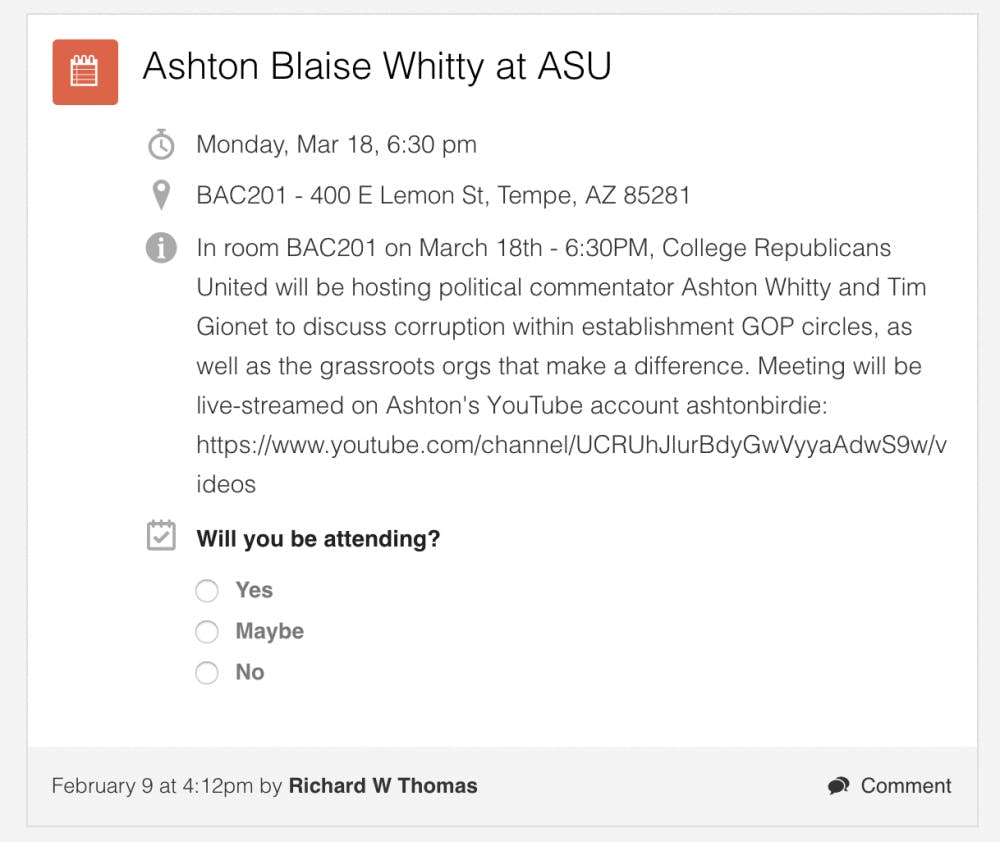 Nikki Tran, the president of Undergraduate Student Government Tempe and current candidate for vice president of service, clarified via email that USG was not involved in the planning of the event, nor did they provide CRU with funding for it.

"CRU has not applied for or received funding for any of the events they've hosted this year from USG," Tran wrote. "If this or any other organization in question is in violation of the student code of conduct, the student handbook, or engaged in behavior that would put them in bad standing, we encourage this to be reported to the Dean of Students office for further review and investigation."

Regardless of the size of the event, other students at ASU said that such events are still harmful.

"(Baked Alaska) was very interested in marshaling out this idea of ethno-nationalism, he's been very involved with the Charlottesville neo-Nazi rally," Paillot said. "To have these people here ... it shows communities of color, who are very prominent and valuable on campus, that the University doesn't care about them enough to deny space and a platform for these people."

Correction: The subhead in a previous version of this article incorrectly stated that Candace Owens was at the “Campus Clash” event, at which she was not present. The article has been updated to reflect the changes.

Editor's note: This story was first updated at 2:40 p.m. on March 23, 2019 to include a statement from USGT president Nikki Tran. This story was updated again at 11:59 p.m. on March 23, 2019 to include additional information about Gionet being invited to speak at College Republicans United's meeting. These updates are in the 29th, 30th, and 31st paragraphs.