The University said it is committed to improving their relationship, but some students feel the changes are too little, too late

ASU is making changes to address the concerns of multicultural student groups on campus in response to  student claims that the tenuous relationship between the groups and University leadership has faltered in recent years.

The discontent, which came to a head earlier this year when members of the Council of Coalitions marched through campus at the end of February, has led to a restructuring of advising staff that act as liaisons between the University and student groups. The University says that it's also opening up lines of communication with the multicultural groups to better address their grievances.

While some coalition members said they are cautiously optimistic about the changes, which include giving coalition leaders access to senior administration officials, other marginalized students still feel as though they don’t have a voice.

During the protest, students delivered a list of demands to ASU President Michael Crow, who said he responded right away.

The demands from the Council of Coalitions, which is the largest cultural organization on campus, ranged from increasing sensitivity training to addressing what protesters called "biased disbursement" of the student fee.

“I wrote back right away, we're working on all (of them) — most of them are relatively straightforward and can be addressed,” Crow said in a meeting with The State Press in March. "We responded right away, we engaged right away and we have solutions underway for nearly everything that was on that list.”

However, students said grievances stretched back long before the protest.

Drawing junior Paul Salazar, the president of the Philippincoe American Student Association at ASU, said the club has felt left behind by both student and University leaders for years.

“I feel like we'd be much more supported if an administration member, like somebody higher up than USG, could be able to support us because USG in general doesn't really support us in any way,” Salazar said. “It depends on it from year to year, but in general their focus is not on us and it takes a lot of convincing for us to get through.”

Salazar said the process of receiving funding for just one event took the PASA months, though he said he was eventually able to secure the funding. That funding is provided by Undergraduate Student Government.

Cameryn Baum, the appropriations chair for USGT and a junior majoring in cello performance, said that USG appropriates funds in a “viewpoint neutral manner,” pointing to numbers from February that show cultural organizations receive the second most funding out of any organizations.

“The committee follows both USG's bylaws and ASU's guidelines, making all of our decisions on budget requests in accordance with regulations and campus-wide policies,” Baum said in a written statement. “It is written in the USGT bylaws ... that 'All organizations and activities shall be funded consistently and fairly,' stressing the importance of inclusivity and equitable treatment.”

Funds are appropriated based in part on “supplemental documents and estimates uploaded to verify the cost of goods in the request and the location of the event," Baum said.

After the protests, Baum said in a statement that, “Senate President Blinkoff and other Senators have invited ASU students and representatives from student clubs, organizations and coalitions to our Senate sessions to voice their concerns,” adding that, “none of the coalition representatives approached us with concerns about funding decisions being made in a 'discriminatory manner against marginalized communities.'"

Similar accusations were made during the protest, though no examples of fee discrimination were provided.

While the Council of Coalitions represents a large number of the cultural groups on campus, it fails to advocate for groups like the PASA. Salazar said he was unaware that ASU even had a Council of Coalitions, let alone its attempts to reconcile its relationship with the University.

Other groups outside of the council also feel like they have to fight to be heard by the administration.

Samantha Lupnacca, vice president of the group IndiGenius on ASU's West campus and a sophomore majoring in medical studies, said she has felt some support from the University but feels like multicultural groups at large have had to advocate for their representation.

“I feel like ... we have to go to them and be like, ‘OK, hear me out. This is what I need, this is what's happening,'" she said. "It's not something where it's actively a representative from the main hub of ASU is going out and being like, 'OK, how are we best serving?' At least it's not what I've seen personally.”

Rhian Bazzi, a freshman majoring in community health and the vice president of the Lebanese Student Association, said that ASU is focused on Greek life and the athletics department, leaving the problems of cultural organizations to be “swept under the rug.”

Both Lupnacca and Bazzi said they were unaware of the issues between the Council of Coalitions and the University prior to the interview, although they shared their frustrations.

ASU only cares about looking inclusive and supportive for 8 days out of the year pic.twitter.com/rx1qf7Mwux

These feelings, which are shared by several members throughout other coalitions, culminated in the list of demands that were hand delivered to Crow after the protest earlier this year.

Members of the Council of Coalitions said these demands got the administration to listen.

“They got back to us after we released the demands and did that public demonstration, and now we are continuing to work with them, hopefully,” Tevinh Nguyen, a member of the Asian/Asian Pacific American Students' Coalition and a sophomore double majoring in political science and Asian Pacific studies, said that while continued dialogue is appreciated, he feels that the University’s commitments still don’t feel completely genuine.

“Student leaders are tasked with so much … and basically overworked and underpaid and underappreciated for too long,” he said. “It is a pretty common thing in any of these marginalized groups or identities to feel like (they are) just fulfilling … a diversity checkbox.”

Despite the tense, or “dynamic” as Crow described it, relationship between the groups and administration showing public signs of stress in recent months, senior vice president for Educational Outreach and Student Services James Rund said the dialogue was healthy.

“I know of late, the coalition leadership and the vice president for student services and deputy vice president have been engaged in good, healthy discussions about how to improve support for students individually and collectively groups of students,” Rund said. “They've made good progress in those discussions.”

Rund went on to laud the work of the organizations, saying they “represent not only who we are, but really what we are becoming as a student body.”

A series of meetings have followed since the protest, and the University said it is optimistic that the problems are being addressed. 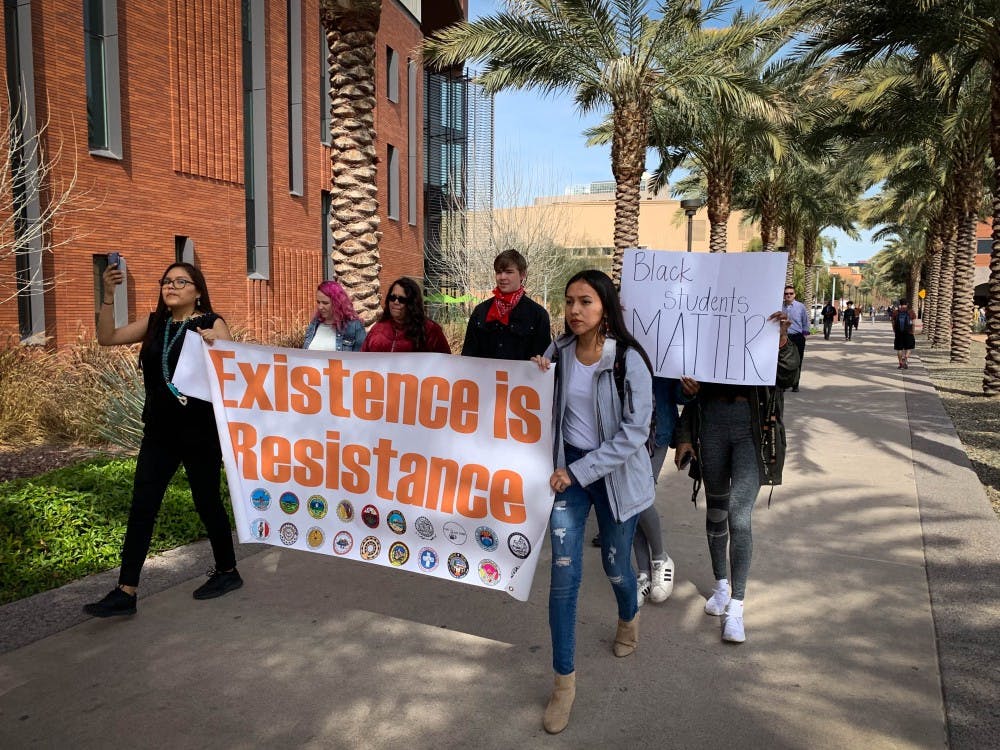 A key person in those meetings is the dean of students on the Tempe campus, Joanne Vogel.

Vogel was hesitant to call the changes a restructuring and said that more significant changes would come in future semesters.

“The current structure in which we have a dedicated adviser paired with a senior leader is a temporary solution,” Vogel said, and that the current solution is just “to get us through to the end of the semester to allow me enough time to really look at what is needed in the space, which staff members we plan to continue to have support which coalitions in what way.”

Nguyen said that any expansion of support staff will help alleviate tensions, but he hopes that more substantive changes are to come.

If they aren’t, more action is expected as these organizations continue to mobilize.

“It's at the heart of why our coalitions were made,” Nguyen said. “So, I think they realize something had to be done once we tried to start organizing again. I think they're paying better attention to us now than before, and I honestly cannot say I'm unsatisfied so far.”

The negotiations are a work in progress, and Nguyen said he would have to await the outcome before saying the University has fully done its part.

Beyond relations with the University, Salazar said the overall atmosphere on campus is reflective of a larger societal problem with race, culture and acceptance in America.

“We attend a campus where we are tolerated, not accepted,” Salazar said. “We are expected to talk differently and fit in just to make it through the day.”