Commercialization of the whims and ways of self-care

“Reserving time to be alone,” but also “spending time with friends and family.”

“Taking a break from work,” while “getting all the work done.”

“Doing a face mask,” and “dropping the beauty routine.”

Self-care is a contradiction.

The contemporary social meme that self-care has become claims to heal the many raising ailments that plague the day-to-day. Whether it be minor stress or major mental illness, the whims and ways of guided meditation or tea-tree face masks are sure to assuage the pain. 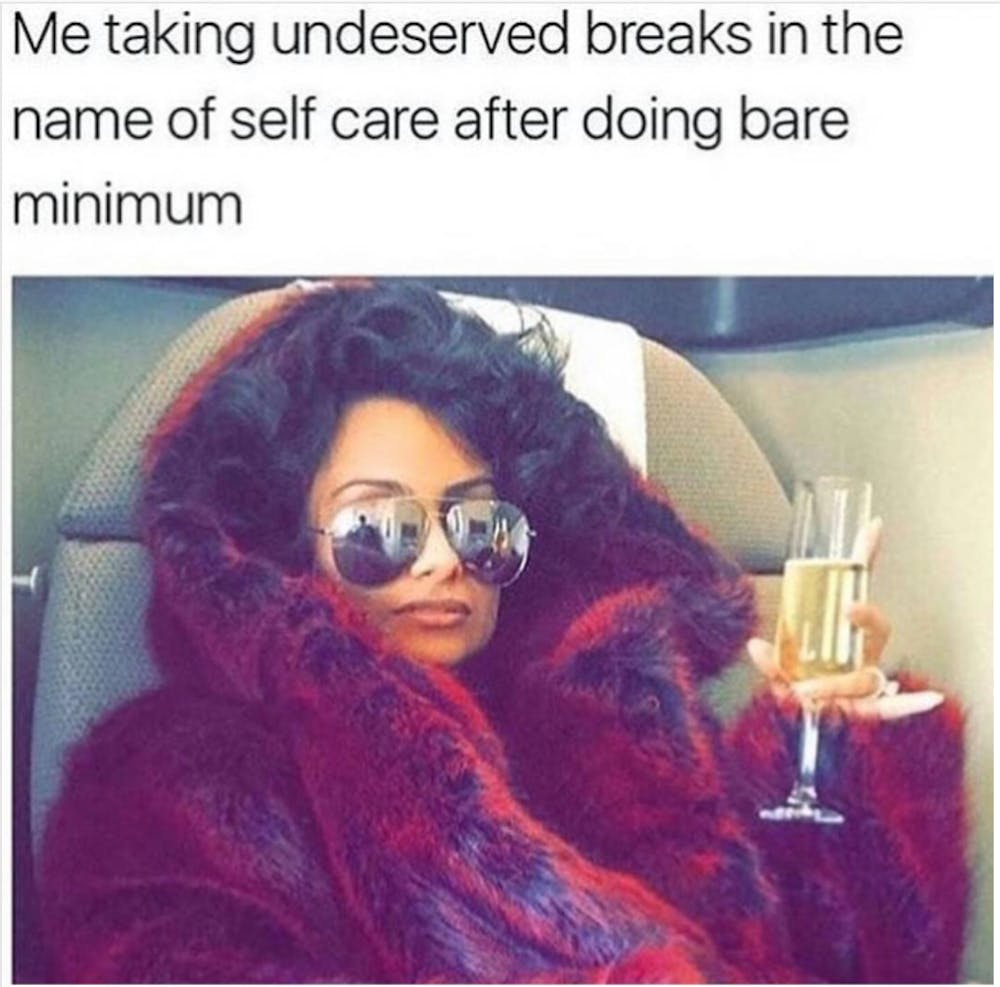 By creating an overwhelming web of products, apps and regimens, the market has taken self-care from an organic act of life to an exhausting, often expensive task. The movement, once hell-bent on holistic fitness, finds itself facing a ballooning population failing to care for itself.

The National Alliance on Mental Illness reported that one in five adults experiences some type of mental illness. On top of this, only 41 percent of adults in the U.S. with a mental health condition received mental health services in the past year, according to the same study.

The mental health crisis, when stirred into the social and financial burden to treat oneself, puts nearly 43.8 million people in a tough spot, according to the NAMI research.

It seems too easy to blame this fiery furor on the internet. And though hundreds of thousands of lifestyle bloggers and health junkies now clog up social media feeds, the self-care movement started long before hashtags.

The International Self-Care Foundation provides a brief history: an individualistic approach to health is innate. Before the rise of modern medicine, people typically treated themselves — in the literal sense, not in the 'treat yo self' sense.

As scientific and medical discoveries birthed the first glimmer of contemporary healthcare, the roles shifted. The majority of the population put its trust in doctors, according to the ISCF.

That is until chronic diseases, like heart disease, diabetes or cancer began to feather across the country around the early 1960s. Mind you, habits of the time consisted of chain-smoking cigarettes and gorging on red meats. Hindsight really is 20/20.

Unlike infectious diseases, chronic illnesses had no cure. But by avoiding unhealthy habits, and practicing — you guessed it — self-care, they could be prevented.

A new feeling of bodily autonomy emerged, a reclamation of sorts. But the healthcare system was only sort of working. The medical world was widely white and overly patriarchal, so it wasn’t really working for everyone.

The civil rights movement and other related activist groups realized this. Marginalized groups promoted their own health on a much more individual scale to protest inequality in health. For instance, the Black Panthers started ‘survival programs’ to emphasize and provide resources for healthy lifestyles.

While the idea gained traction as a civic stance, it also began a budding fad among wealthy Americans. Starting on the fringe, niche groups enlivened the focus on wellness, or actively pursuing health, as opposed to basic health, as in being free of disease.

Wellness branched off from health through a combination of this renewed bodily autonomy and cult-like hippie behavior.

A fringe concept, coupled with the rampant materialism of the 80s, led to cascading trends that eventually encapsulated the masses, which perhaps is best represented by Patrick Bateman in American Psycho.

And this is where it gets fun, or shall we say, Fonda.

Some say it began with the 80s fitness movement. Led by celebrities like Jane Fonda, Richard Simmons and Olivia Newton John, these grainy exercise tapes created a whole new breed of health. Aerobics, jazzercise and the neon leotard trend took the nation by storm.

Fad diets and the fat-free frenzy followed in step. So did self-help books, motivational speakers, meditation and yoga. If it had a vague connection to personal wellness, it was marketed to the masses.

A small toe-dip into mainstream culture quickly escalated to full-blown obsession. The ascending status of luxury lifestyle companies like Lululemon and the dawn of the internet marked an evergreen and ever-growing focus on materialism.

Now, in the contemporary moment, self-care can be anything. Literally anything.

Aside from the contradictions mentioned earlier, self-care, according to Twitter, is “subtweeting men,” “getting so drunk you forget you hate yourself," “buying a houseplant,” or just straight up “crying.”

The bigger problem exists in the commercialization of self-care and the renewed pressure on young people to diagnose and cure themselves of a myriad of mental illnesses through purchasable products.

Somewhere between the Parks and Recreation “Treat Yo-self” episode and the dawn of beauty bloggers, commodity became king. Now the mundane is fetishized and marketed to the general public for consumption.

‘Simple’ self-care tricks flood the web. Most require some type of purchase.

In a listicle titled “30 Lab-Approved Self Care Ideas That Will Change Your Life,” Good Housekeeping advised readers to indulge in 2019. “Pamper your skin” with a $24 face mask, “enjoy some fresh air” with a $90 Columbia long sleeve or “celebrate silence” with $350 headphones.

Other free tips, like walking or (just fucking) breathing, each come with their own app to match.

Every single bullet point covered in the amass of blog posts takes the ills of the mind, body and spirit, and attacks it from a consumerist angle. Exacerbated by the internet, some of the more prominent examples of marketing are becoming increasingly alarming, and equally impressive.

Mugs hover above sparkly bath water, multicolor crystals splay across an elephant tapestry, charcoal face masks smooth over supple skin. #Selfcare seems to plague the social media feeds of one and all, even without the help of the Instagram explore page.

Entire social media accounts dedicate themselves to this “selfless” cause by posting about beauty products, inspirational quotes and weight loss inspiration.

Health-based social media gurus and insta-famous models conjure up a severe sense of FOMO, applying serious pressure to purchase whatever it is they’re selling.

People spend and splurge on advertised beauty products out of an inherent need to fall in line. This also provides a platform for companies to discreetly push self-care products as a cure.

As a result, the self-help industry is now worth $11 billion dollars. And it shows no signs of slowing down.

A study published in 2015 by Field Agent reported that millennials spend twice as much as baby boomers on “self-care essentials such as workout regimens, diet plans, life coaching, therapy and apps to improve their personal well-being.”

Acts of self-care are not evil, and a hike in healthy goal setting isn’t hurting anyone. But with self-care companies relentlessly selling a fleeting cure, the pressure to monitor personal well-being with products builds.

“The ways in which we care for ourselves should be natural and personal,” said Nika Gueci, executive director at ASU's Center for Mindfulness, Compassion and Resilience. “Self-care is not something that you should ‘have’ to do as much as it’s an invitation to give yourself some time to reinvigorate.”

No amount of face masks, spin classes or detox teas are enough to confront actual mental illness. Despite this, they are retailed and raved about as if they do.

With self-care now being sold as the quick fix to anxiety and abjection, indirect consequences worsen the mental health crisis, especially in the collegiate community.

According to the American Psychological Association, “anxiety is the top presenting concern among college students at 41.6 percent, followed by depression at 36.4 percent.”

A reliance on products takes the rather beneficial aspects of self-care and ultimately spins it into an expense or a chore.

“The process of self-care can sometimes become a burden in and of itself,” said Gueci. “When self-care becomes yet another item on your to-do list that you need to mark as done, it can have the opposite effect.” 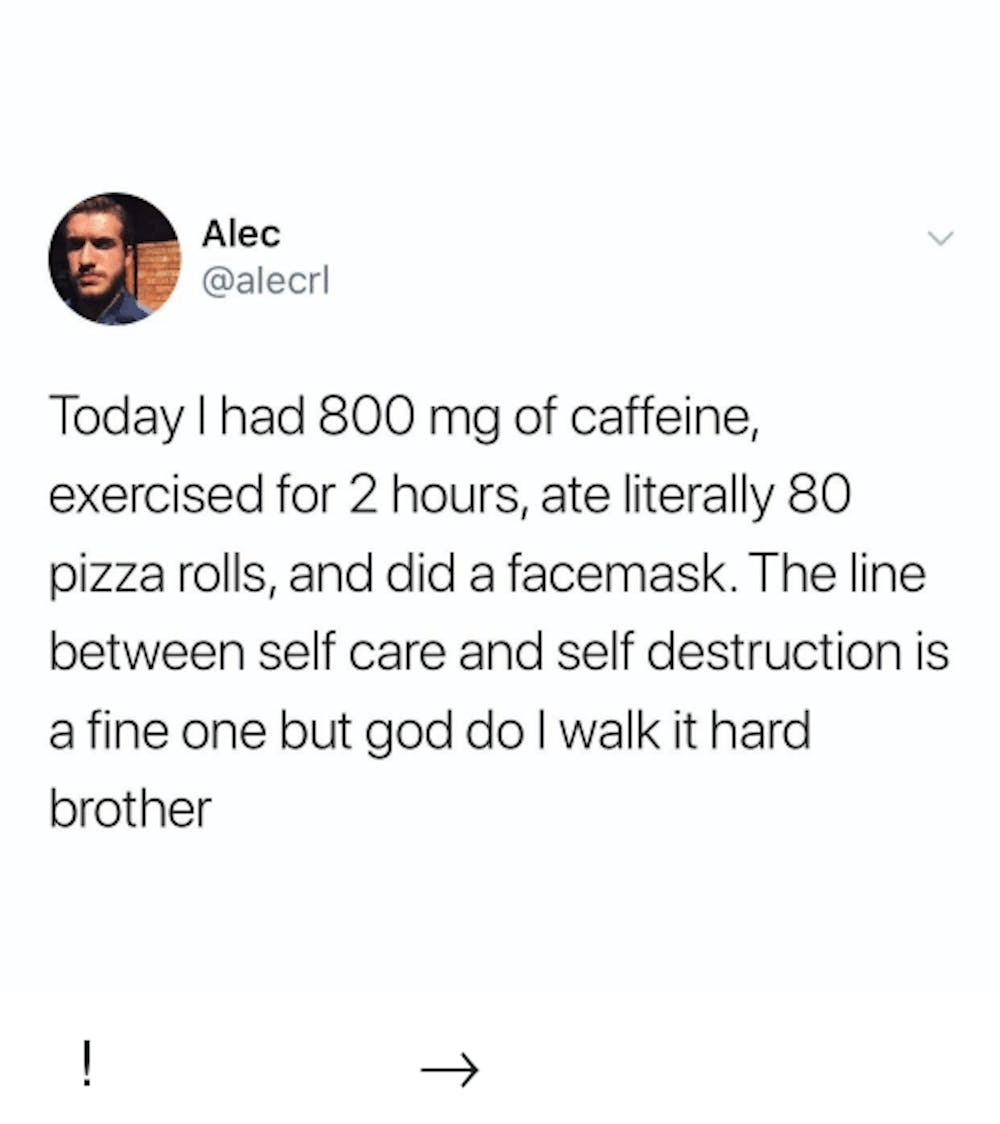 The self-care stigma now contributes to a push towards mindfulness. Though the two used to be synonymous, the concepts now contrast and stand as a foil to each other.

The Mindfulness Center at ASU aims to combat the multiplying misconceptions about how to best take care of oneself, especially with college students.

“Mindfulness is an intentional, non-judgemental awareness of the present moment,” Gueci said.

Through research and different sponsored events, the Center aims to create a ‘culture of caring,’ which basically emphasizes an ‘in-the-moment’ mindset, according to Gueci.

“Many times, we ruminate on the past or worry about the future, and life passes us by. By focusing on what is in front of you, you may see that emotions are temporary, they come and go,” said Gueci. “You may start to gain compassion toward yourself and others as you come to acknowledge that many people struggle with the same things with which you are struggling.”

“I see this a lot with students, where they can be really harsh on themselves whenever they make a mistake or things go wrong, so part of self-care is eliminating that negative self-talk and having a high self-regard,” Correa said.

Low self-esteem aside, time management and stress are also prevalent, according to Correa.

So in the face of daunting assignments and anxiety, college students naturally latch onto the self-care trend, but not always in a constructive way.

Obsessive and excessive behaviors can take a positive or healthy act and sour it. Many young people tend to over-do it when it comes to wellness.

And that being said, self-care differs for everyone. Methods contradict and collide, and that doesn’t necessarily mean it’s a bad thing.

“True self-care begins with sitting with yourself and understanding who you are, what you need so that you can respond to your needs in a more personalized manner,” said Gueci.

So do that face mask, take that nap, procrastinate that article (or don’t, in my case), but recognize that taking care of yourself doesn't have to look like it does on your Instagram feed — and just don’t overdo it.