The group, called Nationalists United, was ejected from the Patriotism Over Socialism rally after guests complained that they were promoting imagery reminiscent of the white nationalist organization Identity Evropa, which has spread racist posters on ASU’s campus in the past.

The rally featured other right-wing figures, including conspiracy theorist Laura Loomer, Brandon Tatum of Turning Point USA and state and national Republican leaders, but NU’s rhetoric was a bridge too far for the organizers.

Rodney Falberg, a former GOP volunteer who attended the rally, said that he reported a NU poster that featured what he called white nationalist "code words" such as “purity,” and “traditional nationalist.” He did this after confronting the new group's founder, ASU alumnus Kevin Decuyper.

Decuyper first appeared in the media as a founding member of College Republicans United, which the State Press profiled for racist comments made by its members last fall.

But former CRU President Rick Thomas said Decuyper was impeached from the group in March after he continued to espouse racist views on social media despite issuing a public apology weeks earlier for making a batch of similar comments first published by the Phoenix New Times.

NU, which is not a chartered club at ASU, propagates on its social media the kind of racist and homophobic messaging that has repeatedly landed Decuyper's old group in hot water over the past year.

Falberg said that he fears Republican leaders are unaware of the tactics alt-right agitators use to influence mainstream Republican policies.

"Most Republican leadership and Republicans themselves … don’t even know who Identity Evropa is," he said. "They are completely unfamiliar with the organization or their ideology, which is paleoconservative at best and ethno-nationalist at worst."

Decuyper said in a Facebook comment leaked to the press last month that part of his goal at the time was to help normalize extreme positions like ethno-nationalism by appealing to more moderate conservatives.

"Employees of the GOP like Falberg here did all they could to slander us and shut us down, resulting in the wife of the event organizer confiscating our property," the post read. "This is the typical GOP reaction when you share a traditionalist-nationalist message, they show their true values are of globalism and modernism and they'll make up any lie to expunge your presence."

A sample of posts on the NU Facebook page vary from references to the 2017 "Unite the Right" rally in Charlottesville to outright homophobia. 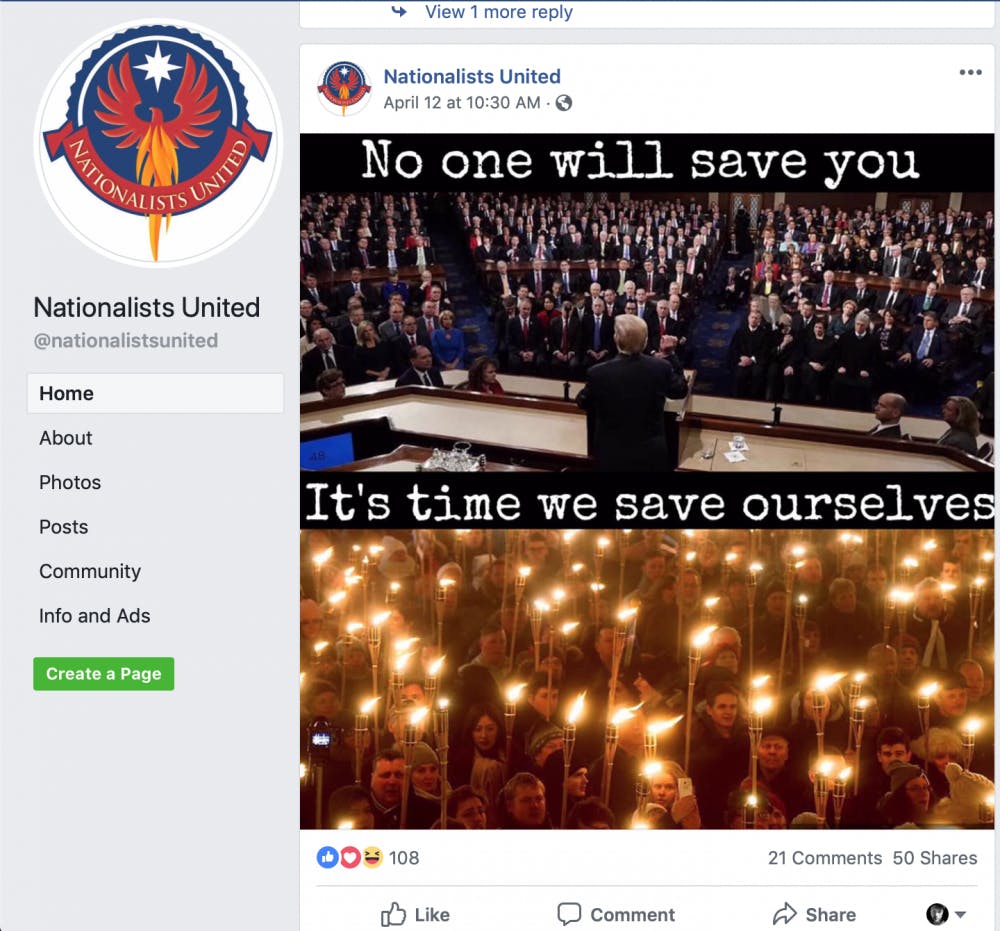 Screenshot of the Facebook page of Nationalists United taken April 16, 2019.

One member of the Facebook group, ASU global politics freshman Garrett Thornton, said that nationalists are misrepresented in public discourse, although he disagrees with some of the imagery his group uses online.

"When people think of 'nationalism' they immediately think of 'white nationalism' or 'white supremacy,'" Thornton said. "I want to make clear that I am neither of those. I am an American nationalist."

Thornton said that although NU is not a chartered group on campus, it fills a gap where other conservative organizations have fallen short.

"Organizations like TPUSA or CR have also alienated many conservatives due to their often times lack of a backbone in face of controversy as well as an increasing amount of hypocrisy and indecision," he said.

Current CRU members denounced NU in written statements Tuesday, saying they have no affiliation with the new organization.

"With our constitution and bylaws we believing in free speech and we don’t kick people out for a first offense,” Thomas said. “We want people to learn from mistakes and to grow as a person."

Thomas said that Decuyper disregarded warnings about postings on social media prior to his impeachment.

"After the press conference, RU’s Central Committee had a long conversation with him and ignited an impeachment procedure that removed him from his position and the club," he said. "Kevin is doing his own thing now, and seeing his recent posts (the impeachment) was long overdue."

Thomas was also among those who publicly apologized after reporting by The State Press and the Phoenix New Times uncovered racist and incendiary private chat logs, as well as social media posts. The club faced backlash from campus groups and triggered a University investigation into club members' conduct following the reports.

Decuyper did not return requests for comment at the time of publication.