The facility, called the Arizona Center for Algae Technology and Innovation, is home to labs dedicated to using algae technology to develop sustainable alternatives to agriculture, commodities and energy.

Even though the name AzCATI isn't commonly heard on the main campus, companies and countries across the world send scientists to the center year-round to learn about algae technology.

One lab run by Taylor Weiss, an assistant professor in the environmental and resource management program, is leveraging the power of algae to produce plastic.

Weiss is creating bio-plastics, which are plastic polymers that can be created from biological sources. In this case, cyanobacteria found within algae work alongside a naturally occurring secondary bacteria (Halomonas boliviensis) to form plastic. 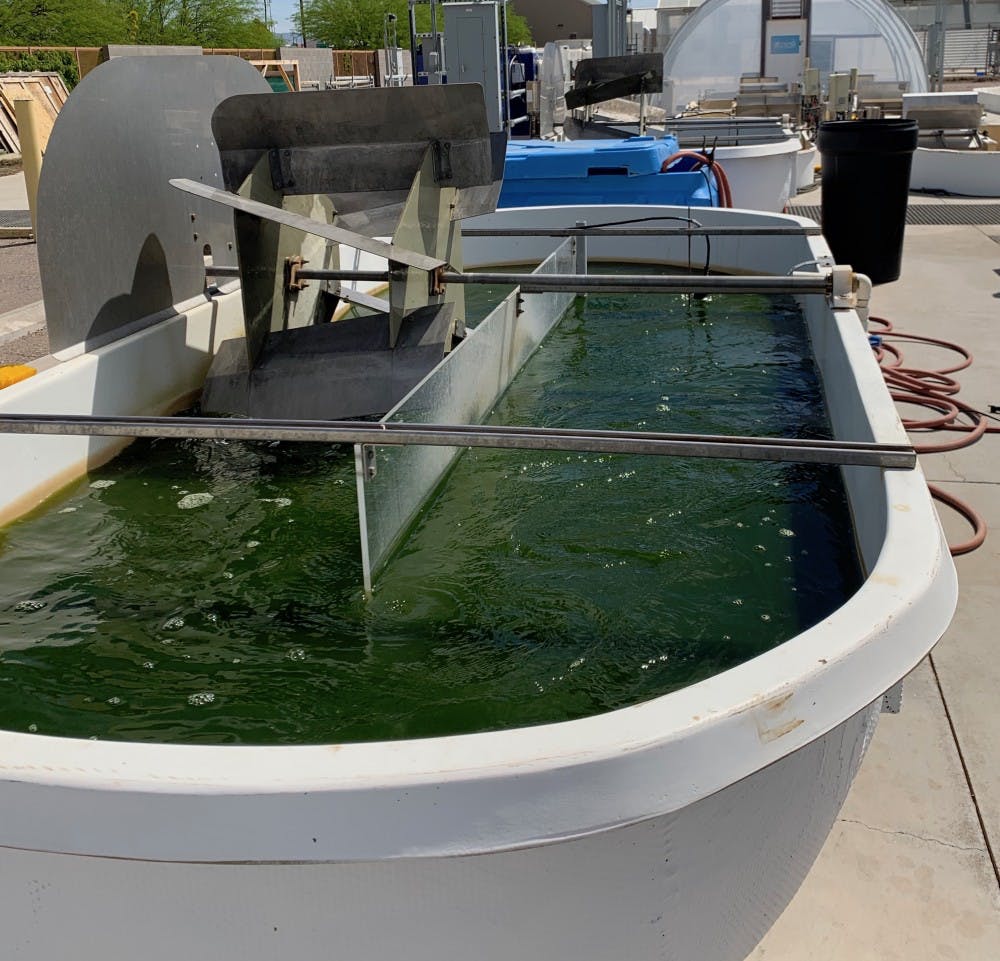 Milo Charbel
An algae bloom is seen in a reservoir on the ASU Polytechnic Campus in Mesa, Arizona, on Tuesday, April 9, 2019.

Getting the bacterial cells to produce plastic requires a simple genetic change.

"It's a simple core metabolism," Weiss said. "You can make any cell make bio-plastics, even humans cells."

The type of plastic Weiss is making is classified as biodegradable, solving the issue of synthetic plastics, which take a long time to break down.

The nature of these plastics makes them great for replacing things such as plastic lining.

"Starbucks has had a recycling problem for a long time," Weiss said. "Any paper cup you've ever seen that's coated in wax can hold cold liquid. You heat it up and it separates the wax from the paper. With coffee cups you can't do that, so they use synthetic plastics."

Because bio-plastics are biodegradable, they are possible solutions to the coffee cup dilemma and many others.

"When people think of plastic pollution they think of plastic bottles in the ocean, right? That's actually less of a problem," he said. "The problem is the microplastics. So every plastic bottle you've ever seen is just broken down into smaller and smaller pieces, which means things like algae are eating it and it's entering the food chain farther and farther now. And that's actually worse."

The large-scale production of synthetic plastics has grown to epidemic pollution proportions.

"Synthetic plastics are incredibly resistant to degradation," Weiss said. "The first plastics that were made are still here and they will continue to be."

Weiss is incredibly passionate about bringing together the fields of biochemistry and engineering together and believes the overlap between the fields can produce new innovations for the future of environmental resource management.

"Just exposing people to these new interdisciplinary ideas, that's a major success," he said. "We're making progress on this. A lot of the new science coming out these days, the reason why it's popular and successful, are simply because (they're) areas we haven't delved deeply into."

Having the opportunity to work in this field has inspired students in the lab to pursue algae technology in the future as a career.

Michelle Osgood, a junior studying biochemistry and an undergraduate researcher working in the lab, said that the experience "has helped me see how the things I learn in class coincide with the real world. The things I see now help solidify what I learn in classes."

"The lab is good at pulling people together from different areas of expertise to collaborate together," Osgood said.

She said she is thankful for the opportunity to work in the lab as it has helped her gain experience in the world of research, something she was interested in since high school.

The field of algae research is still young, making it likely to evolve significantly in the following years, Weiss said.

"So the next big question is what are we going to be the next major initiatives?" he said. "What we're doing now won't be the same thing we're doing in ten years; that, to me, is exciting."