An ASU professor and her research team found that the fish caught in many of metro Phoenix's man-made urban lakes and ponds might not be safe for consumption.

The research team, led by School of Mathematical and Natural Sciences assistant professor Beth Polidoro, claims that contaminants may have spilled into these lakes and ponds, thereby spoiling the fish and posing a potential danger to anyone who consumes them.

Polidoro’s team of undergraduate students traveled out once or twice a week to collect water samples from different urban lakes and ponds that support urban fishing.

In addition to obtaining water samples, the team caught and tested the fish. The samples and fish were brought back to Polidoro’s lab at ASU's West campus and then a lab at the Downtown Phoenix campus, where they performed tests to find organic and heavy metal contaminants in the fish.

"We actually found mercury that was above the EPA threshold for safety in the tissue of the fish," said Daniel Lucas, a member of Polidoro's team and a student at UA.

Marc Dahlberg, the water quality program manager at the Arizona Game and Fish Department, said the fish his department puts in the water actually have a lower percentage of mercury than most seafood and fish found at the market.

Dahlberg said they test the fish thoroughly with the Arizona Department of Environmental Quality before they leave the hatcheries, and they have found no unsafe contaminants.

"We're putting fish in the water that [are] equal to or better than the fish that can be gotten from the market or just as good as the fish you can buy from Fry's or Safeway," Dahlberg said. "We're delivering a good product."

Dalhberg said the Game and Fish Department only tests the fish before they put them in the lakes and ponds. Polidoro and her team said the contaminants are possibly in the water, which transfers to the fish after they have spent time in the man-made lakes and ponds.

“We found a lot of hydrocarbons in urban ponds that were close to major expressways and freeways, and those are chemicals that are poured out your exhaust engine and then they get deposited into the lakes,” Lucas said. “And as we proved, whatever ends up in the water has a chance of getting into the fish and eventually into people.” 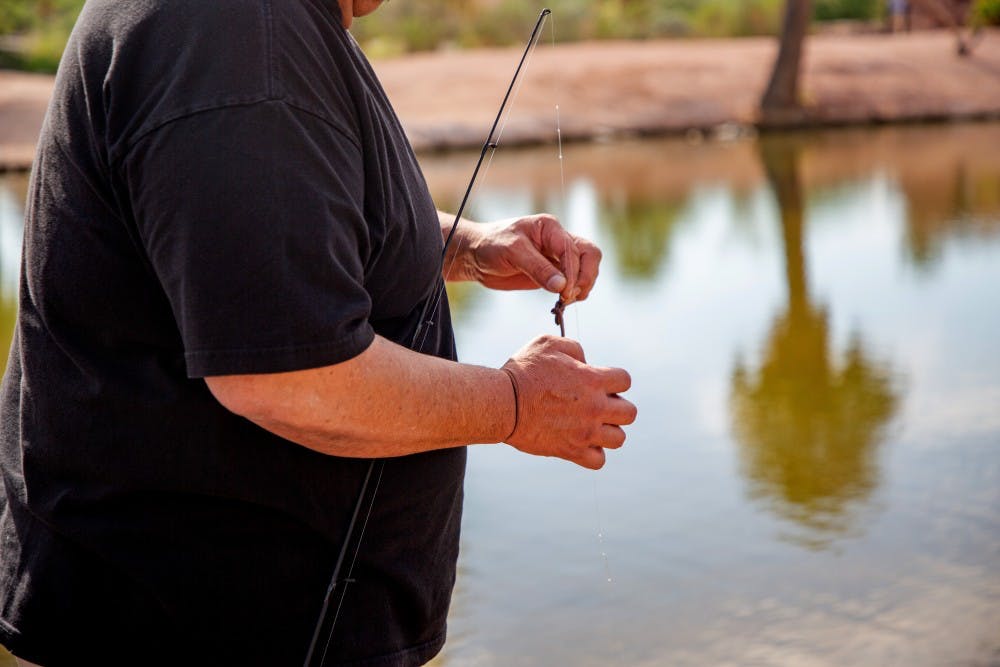 The Arizona Department of Environmental Quality has stated that since the urban ponds in question are man-made, they are not considered part of the Waters of the United States rulemaking guidelines, so they are not monitored.

But, ADEQ said it is working on a program that monitors the different bodies of water in the state.

"ADEQ is taking steps to develop a waters of the state program. ADEQ is very early in the process, but did request funding for the next fiscal year to help develop a program,” a spokesperson for the ADEQ said in an emailed statement.

Bodies of water around the nation are registered under The Clean Water Act, but there are many lakes and ponds within the Phoenix metropolitan area that are not registered, including the man-made urban lakes and ponds.

The Clean Water Act regulates the pollutants found within surface waters. It makes it unlawful for a discharge of pollutants in the waters and keeps it controlled.

But because the lakes and ponds in question tend to be man-made and are not part of the WOTUS, they don't fall under the jurisdiction of the Clean Water Act.

Rachael King, a member of Polidoro's team and a junior studying environmental science, said this has led to a gap in regulatory oversight.

"There's a gap that nobody has really looked at before, because you look from the outside in and think that there should clearly be some sort of agency monitoring that water," King said.

"The stocked catfish come from a vendor that also supplies grocery stores and trout occupy an intermediate position in the aquatic food web and have been shown in Arizona data to bioaccumulate mercury at a lower rate than higher-order predators," ADEQ said in the emailed statement.

But according to King, the only contaminant ADEQ tests for is mercury, and Polidoro’s team found that there was more than just mercury in the fish, which they said is a cause for concern.

The team found that there were multiple organic contaminants and other metals that could potentially be dangerous.

“The project took fish out of the lakes and tested them for a variety of contaminants,” King said.

She said Polidoro's project did more extensive testing, looking at more contaminants in more lakes and ponds than ADEQ did.

The project also tested water quality, going beyond just the tissue of the fish for signs of contaminants.

But the Game and Fish Department, as well as ADEQ, said the only contaminants that are a cause for concern are mercury and aluminum because those materials were the only two that had slightly higher levels.

In order to identify the real issue going on, Polidoro said something else must be done. Because the fish that reside in the lakes and ponds are a major source of food for marginalized communities, Polidoro said that it is important that they are monitored.

King is in the process of trying to spark change in the monitoring of the lakes and ponds that are not under the Clean Water Act. She developed a piece of legislation that she hopes will address the issue and plans to present it to the State Senate in January.

Polidoro, Lucas and King all called for “environmental justice," and said something must be done to deal with the contaminants.