Tempe City Council unanimously approved the construction of a new development called Hilo Tempe that, unlike most housing projects in Tempe’s urban core, has 42% of its total residential units dedicated to co-living spaces.

Rob Bak, a development manager for Core Spaces, the company creating Hilo Tempe, said at a Regular Tempe City Council meeting held on Sept. 12 that the co-living spaces are designed to be a more affordable option for Tempe residents.

Core Spaces has traditionally focused on creating student housing, but the developer realized that there was a huge renter pool that could not afford the organization’s existing housing options. This led Core Spaces to re-evaluate to find how they could develop a complex with rent at a lower price point, Bak said.

Young professionals and recent ASU graduates living in the downtown Tempe area can share a kitchen and common areas in these units and save money on rent compared to owning a studio apartment alone, he said.

“(Tenants are) out working late ... and they're not necessarily cooking for every meal, every part of the day,” Bak said. “They're not putting much value on that ... You've got your own individual space, but you share what you might not value quite so much. For our tenants, that equates to a lower rental price."

Core Spaces planned to build Hilo Tempe on Mill Avenue as a response to students graduating with student debt and working entry level positions who might not be able to afford a home yet, Bak said.

Manjula Vaz, a Gammage & Burnham attorney representing Core Spaces, said at the Sept. 26 final Tempe City Council adoption hearing for Hilo Tempe that the building will only allow tenants who are 21 and older, and will allow co-signers as well.

Not allowing co-signers for tenants was an idea that members of city council brought up at the first hearing on Sept. 12. It was an idea proposed to ensure that current college students would not overrun the building and take away housing options from other Tempe residents.

Chip Schell, the vice president of new business at Core Spaces, said the plans for Hilo Tempe were influenced by Tempe’s drafted Urban Core Master Plan, which will not be available for approval until Oct. 17. The plan seeks to diversify Tempe’s housing supply, which includes more affordable options for tenants working in the urban core. 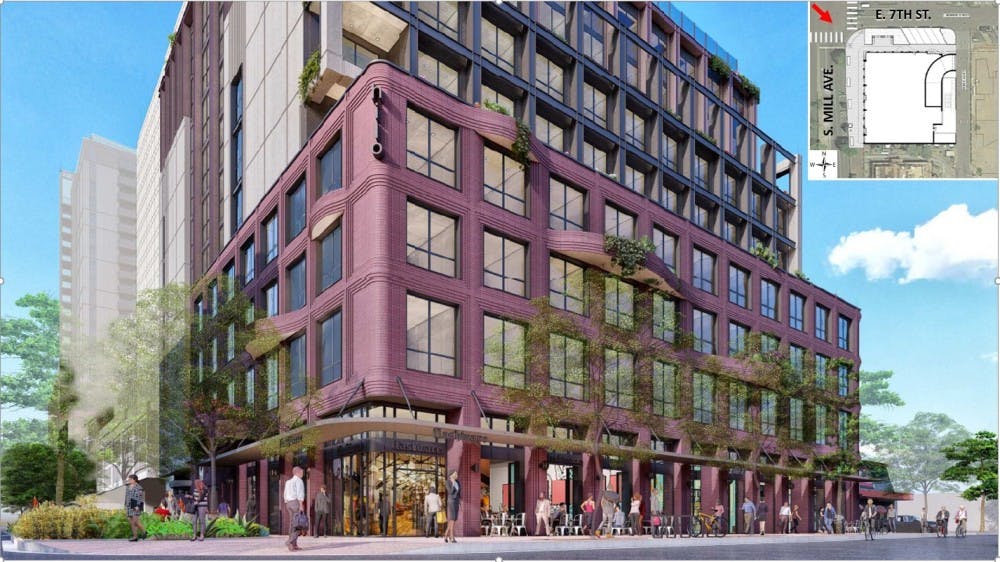 “There may be visiting professors at Arizona State who need (housing) for a semester... It's a very flexible model,” Schell said.

Schell said in addition to sharing space, co-living spaces at Hilo Tempe will be all-inclusive, meaning utilities like internet are included in the price of rent.

Tempe City Council member Robin Arredondo-Savage said at the final hearing that she was concerned about the development’s underground parking structure, as well as the entire concept of co-living spaces and how successful they would be in Tempe.

She said she appreciated Core Spaces’ cooperation with the council to mitigate traffic and discourage people from driving and instead use alternative modes of transportation.

“This is a completely new, different concept, and nobody really knows what is going to happen,” Arredondo-Savage said at the meeting. “I never saw anything about best practices or this being successful anywhere else. I have to tell you it's been really a struggle for me.”

Dominick Luciano, the senior vice president of marketing for Core Spaces, said that the company wants to reintroduce a lifestyle of co-living in a way that doesn’t remind tenants of student dorm life.

“We think that there's going to be an incredible opportunity for them to have the best in-class amenities coupled with a nontraditional way to live affordably in a downtown area,” Luciano said. “I think that's exciting for us to take what maybe they experienced that freshman year, but really kind of flip it on its head and give them the opportunity to have the best of both worlds.”

Schell said that Hilo Tempe’s proximity to the Tempe streetcar, 142 bicycle parking spaces (compared to the building's over 50 parking spaces) and two spaces for car sharing services can help tenants afford to travel in Tempe without needing a car to get around.

The building’s tree and canopy structures will help provide shade to pedestrians walking to and from the building, as well as add to Tempe’s goal of increasing its tree canopy, Schell said.

“With the citizens of the whole Phoenix area willing to put their money into better public transit, we can be part of that, and certainly encourage things that in the long run are going to be good for the city and the environment,” Schell said.