Opinion: College isn't the only option

College isn't the only way to find success in your career

Charlie Green, a 20-year-old Arizona resident, always figured he would go to college.

However, instead of studying for finals at a university, Green is now cloistered away in his home feverishly typing out notes for upcoming songs.

Green’s story of success is an anomaly, but it highlights an important concept: While college can help students be successful, if students don't feel like college is for them, they need to recognize it is okay to pursue other paths and can still be successful.

While Green had intended to go to college, a possible option being ASU, he decided to abandon college for now and focus on his music career once he garnered notoriety on YouTube. He claims his channel, CG5, is now making $30,000 every month.

To put this in perspective, students who graduate from ASU with a bachelor’s degree in music can find careers with salaries ranging around $50,000, according to the Occupational Information Network.

If students at ASU believe there is another avenue they would rather take than a traditional college education, they should pursue that path. Not everyone wants to have the cookie-cutter experience of going to college and acquiring a degree.

In fact, one of Green’s favorite aspects of being a content producer on YouTube is the diversity of his schedule.

“My favorite part is being able to have my own schedule. I get to do whatever I want whenever I want,” Green said.

It is completely valid if ASU students feel like their career of choice doesn’t justify the cost of attending a university.

The Arizona Board of Regents approved an increase in ASU tuition this year, which could lead more students to choose against college.

While ASU President Michael Crow has promised tuition won't increase more than 3% every year for the next ten years, this doesn’t change the fact that college can be difficult for students financially.

Students shouldn't feel obligated to attend college if students feel the amount of debt they acquire wouldn’t justify the payoff in their career field.

An analysis of research acquired from the Survey of Household Economics and Decisionmaking by the Pew Research Center showed 36% of students who have student loans believe the financial costs of their degree outweigh the benefits of having the degree.

This is important to know because if students are questioning if going to college for their degree will be worth the financial cost, then it’s better to choose another route instead of having both debt and regrets. 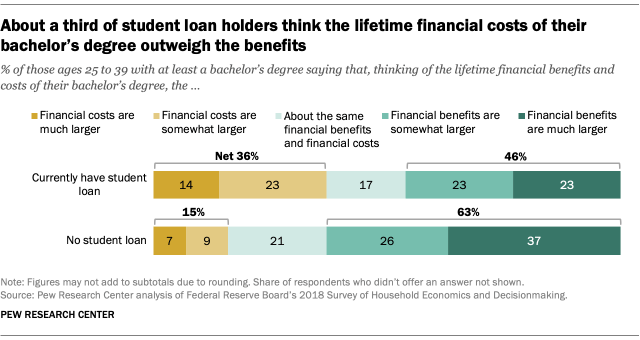 There are also plenty of trade jobs offered in Arizona, which don’t require degrees that need to be filled if students are searching for paths outside of college.

According to a 2019 Arizona Workforce survey, 72% of hourly craft positions in Arizona have increased pay rates because is a shortage of trades workers.

If your passion doesn't require you to go to college — why are you going?

This isn’t to say college isn’t important. There are several careers that strongly encourage having a degree. For example, according to the Bureau of Labor Statistics, you typically can’t be a lawyer without your J.D.

I personally choose to remain in college for my degree in journalism because I believe it’s imperative to be informed. I do not think I could have learned what I have learned at ASU in other places.

The Bureau of Labor Statistics recommends that people interested in pursuing journalism enroll in a bachelor's degree program of some sort, which is why I personally choose to remain in college.

However, while some jobs may require degrees, this doesn’t change the fact that students shouldn’t feel obligated to place themselves under stress of debt or years of learning, when they could attend trade schools, internships or even dive headfirst into the career of their choice.

As such, if students feel the typical college degree isn’t suited for them, then it’s important they recognize there are more opportunities outside of the standard degree to consider.