An ASU professor and author on the history of segregation, carceral power and his childhood

Rashad Shabazz chose — no, he needed — to leave Chicago.

The month he left Chicago to go to college, someone was killed on the South Side.

The residents of a neighborhood had organized a block party. What was supposed to be a celebration in the neighborhood turned to mourning.

The killer was never brought to justice. In fact, the same gang that ordered the boy to shoot an innocent girl killed him. Afterward, they dumped the boy’s body in an alleyway, Shabazz said.

“It was that kind of thing — especially young men who felt alienated, who felt powerless — having access to guns and dealing with conflict through force and violence, it just created a really toxic mix that continues to this day.”

Shabazz, now a professor of geography and black cultural studies at ASU’s School of Social Transformation and author of the 2015 book “Spatializing Blackness,” has spent a significant amount of his life trying to understand how the neighborhood he grew up in came to be, and how the 8 miles between northwest Chicago and the “black belt” on the South Side might as well have been two different worlds.

In a review of Shabazz’s book, David Ponton III said, “for Shabazz, ‘black masculinity’ becomes reconfigured as a consequence of these racialized prisons, producing cycles of gender performance among black men that devastate black communities in terms of violence, health and well-being, and economic stability.”

Nicole Mayberry, a doctorate student who Shabazz is an advisor for, said he approaches teaching from the perspective of equity.

“He’s a natural community builder and allows us to come together and work out ways we can situate our research,” she said.

In the spring of this year, he brought some of his graduate students to a national conference in Washington D.C. He introduced them there to geographers whose books the students read, said Brett Goldberg, a graduate student who went on the trip.

Shabazz studies under world-renowned civil rights leader Angela Davis and is currently working on a book to discover how the structure of Minnesota’s education system helped produce artists like Prince.

He educates the ASU community about critical race theory and the history of social injustice, knowledge that is key in today’s political and social discourse.

But all of his work follows a theme that traces back to his origins in the South Side of Chicago. 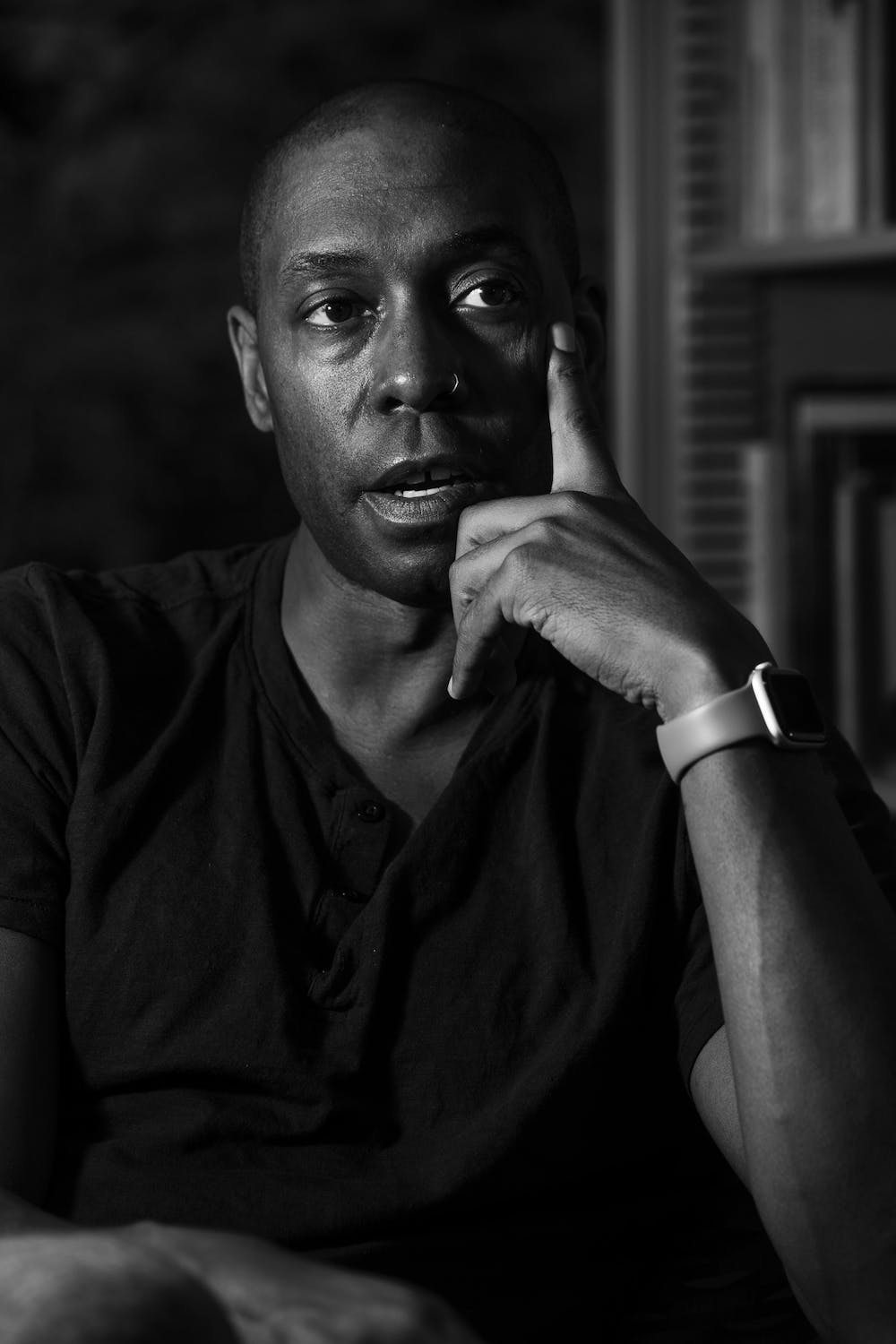 Inside Wilson Hall at ASU, Shabazz is sitting comfortably in a maroon plush chair surrounded by books encased behind glass, old maps of Africa and wallpaper of a cabin in the woods. Light from the window catches on his gold nose ring, and his deep-set eyes stare calmly into space.

Shabazz still carries the trauma of the South Side. He doesn’t sit with his back to the door, he said, out of an anxious habit to remain constantly alert of his immediate surroundings.

In the mid-80s and mid-90s, Chicago had between 664 and 943 homicides per year, according to the Chicago Police Department. Gangs carried out many of the murders, Shabazz said, but that was in part because people did not have faith in the police or the justice system.

Gangs sprang up to deliver “street justice,” but that only exacerbated the violence.

When rappers Ice Cube, Eazy-E, Dr. Dre and more formed N.W.A. in the late 80s and came out with their hit single “F--- tha Police,” Shabazz had a watershed moment.

“For many hip-hop heads and rap fans, and particularly for young black kids and kids who were under the thumb of the police, when ‘F--- tha Police’ came out, there was a song that said what we've been saying for years,” Shabazz said as he held up a middle finger.

Shabazz’s relationship with “F--- tha Police” is representative of one of his core findings in how law enforcement polices the black community.

Like many other children or teenagers, Shabazz and his friends hopped fences, ding-dong ditched houses and drank water from neighbors’ hoses, but that kind of mischief was “deeply criminalized,” Shabazz said.

The police followed black people — especially in white neighborhoods, accused them of wrongdoing and at times shot them, he said.

Because the police were hostile to young black men like Shabazz, he and his friends antagonized police. One of the ways they did this, Shabazz said, was by saying “F--- the police” while passing them, then running when the police tried to chase them.

“It was kind of a bit of a game until one time, we said it to them, and they pulled guns on us,” Shabazz said. “It was clear that it wasn't just an adversarial relationship. It was a relationship between whose life is valuable and whose life is not, and that they would be willing to draw their service weapons on little kids who just said ‘F--- you,’ and end our life.”

The origins of this interaction, Shabazz makes clear in his book, “Spatializing Blackness,” are not in the interest of law and order, but control and white supremacy.

“The Mike Browns of the world go back decades,” Shabazz said.

In early 20th century Chicago, Shabazz said, the perceived power of white people was being challenged in vice districts where drinking, gambling and prostitution were quietly accepted by the police. At the center of this racial struggle were popular destinations known as “Black and Tans,” named after the open interaction between blacks and whites.

But one captain on the Chicago police force, Max Nootbaar, viewed Black and Tans as a “crucifixion of whiteness” and a moral affront because of the interaction between races. There were two worries in the white community: Black and Tans spreading to white neighborhoods, and sexual proclivity.

When Nootbaar became captain of the police force, he used his power to send police raids into Black and Tans in an effort to eliminate the association between white people and non-white people. This was illegal, and yet he only received punishment equivalent to a slap on the wrist, Shabazz said, and continued his crusade in black neighborhoods.

“He was in the best position to do this. He was a cop. He had the authority of the state right there at his hands,” Shabazz said.

Racist ideas about black men’s inherent aggression and violent sexual pathology proliferated at the time. “In the fall of (the Reconstruction era), we see the rise of the geography of white supremacy,” Shabazz said in a talk he delivered at Brown University.

Nootbaar was the son of German immigrants, but the practices he employed as a police officer helped him to shed his ethnic identity and enter broader whiteness, Shabazz said. By policing blacks, viewed as the largest societal threat to white Americans, Nootbaar was no longer seen as foreign; he was a white American.

Middle class black people welcomed police into their communities, in fact, in an attempt to show the broader public that racist tropes of a violent sexual pathology among black men were untrue, Shabazz wrote in his book.

But this led to over-policing in black neighborhoods, and as Shabazz said, “Once police power moves in, it stays.”

Trying to compare the more white and affluent North Chicago with its suburbs and financial district is almost impossible. It’s like trying to compare “Ferris Bueller’s Day Off” with “Boyz n the Hood;” it’s going from Tempe to Tijuana, Shabazz said.

So when Shabazz saw “Ferris Bueller’s Day Off,” he felt totally misplaced.

“I still love it to this day, but it is not about the city I know,” Shabazz said. “They're in the nicest suburbs of Chicago in the northwest suburbs, so that isn't part of my life. Even though I respect the Cubs, even though I loved Harry Carey and their whole seventh-inning stretch and Wrigley Field is beautiful, it was another world.”

Shabazz is a Chicago White Sox fan, the team of the South Side, which may seem trivial, but his affiliation with the Sox is illustrative of the common consciousness on the South Side.

He remembers the Sox’s Comiskey Park when it was still called Comiskey Park, and their players, catcher Carlton Fisk and right fielder Harold Baines. Hyde Park and Englewood, corner stores and high schools are all part of a common language for residents of the South Side, Shabazz said.

“Chicago is just a really great case study. The segregation, the poverty, it produced a landscape,” Shabazz said.

While buildings on the South Side have been torn down in recent decades, displacing thousands of people to find new homes and further resign the South Side to an outer appearance of poverty, the north side has boomed with investment and new infrastructure.

“It's that dichotomy that produces the reproduction of inequality around wealth, health, longevity of life, and access to food, bad health and shorter lives,” Shabazz said.

According to a recent NYU School of Medicine analysis, Chicagoans living in Englewood on the South Side live an average of 30 years less than those who live in Streeterville in North Chicago.

A farewell to Chicago

“You know, I felt like I had to leave Chicago in order to do the things that I wanted to do, and I needed to be out of what was going on in terms of the street-level violence,” Shabazz said.

Shabazz left to do his undergraduate studies at Minnesota State University, about 80 miles southwest of Minneapolis, before coming to ASU for his master’s. He worked in California and Vermont before being recruited to come back to ASU as a professor.

While his body may be in Arizona, his mind is still working on how to remake the South Side of Chicago. He believes the appetite to change police practices is growing, either through self reflection from the police or through forceful demands from the public.

Building off of his findings from “Spatializing Blackness,” Shabazz is introducing ideas through his book to change the South Side and the cyclical violence within it. The solution, Shabazz said, is to turn those areas into “green spaces,” where community gardens can grow.

“We need green spaces that serve the needs of poor and working-class people of color,” Shabazz said. “It brings the temperature down no matter what the context is, whether adversarial or not.”

He said he developed writing and speaking skills, but those do nothing for the plight of average Chicagoans unless they can be shared with the general public. His work has contributed to understanding carceral power, the history of segregation in Chicago and green spaces, but also his own understanding of himself.

“I wish I could have done what I've achieved in life and done it there, but that wasn't possible,” Shabazz said. “But Chicago gave me lots of gifts, absolutely. They gave me an experience, they gave me a way of understanding myself in the world, they provided me with a narrative and a story to understand who I was.”

Editor's Note: This story was updated on Nov. 6 at 7:07 p.m. to add multimedia content.