Despite ASU's strategic plan for diversity, the ASU Police Department is overwhelmingly lacking in its representation of the student body. 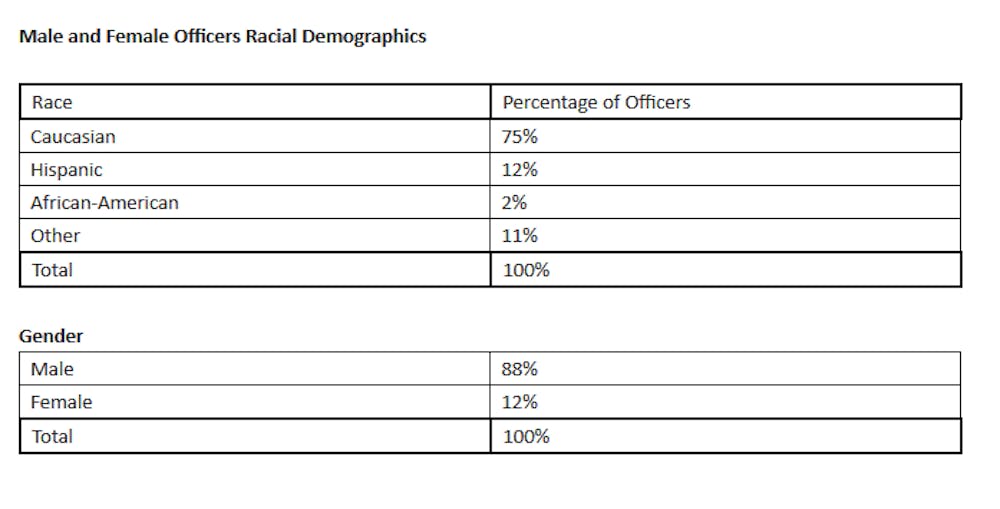 This lack of diversity isn’t uncommon in police departments. According to the 2019 National Institute of Justice Special Report, female officers comprise less than 13% of the police force in the U.S.

In a 2015 report conducted by The United States Department of Justice, both Hispanic and African American police officers each separately comprised about 12% of police departments nationally.

“It was and still is a male dominated field,” Veach said.

Some students want the department to reflect the diversity of those who attend the
University. Rania Jundi, a sophomore studying biology, is one of them. Born in Iraq, Jundi has a unique perspective. Jundi’s desire to share her experiences with others inspired her to start the Cultural Diversity Club on campus.

She said she fears a lack of diverse officers could lead to bias in the police force and result in students being uncomfortable to openly express themselves on campus.

“If there’s only one culture, they're not going to know how to interact with people who are different, and that's a negative structure,” Jundi said.

To compare the ASU Police Department's demographic statistics to the campus's, the National Center for Education Statistics reported that 34% of ASU Tempe's student population was confirmed to be comprised of races other than white.

Saadiq said in an email that the department has taken steps to further ensure a diverse police force and continually strives to have the demographics of the force resemble the ASU student population.

“We have implemented a sworn personnel recruitment plan to address the recruitment of underrepresented groups, specifically minorities and women,” Saadiq's email said.

Kevin Robinson, an instructor at the school of criminology and criminal justice and former assistant police chief with the Phoenix Police Department, agrees there is occasionally difficulty in recruiting minorities.

As an African American and a former police officer, he found he was ridiculed by his friends for joining the police department and knew others who refused to join the police force because of how they felt officers treated minorities.

“The reason a lot of police departments are not getting a lot of black males applying is because black males, black females and others as well, see how some law enforcement officers treat black males,” Robinson said. “They ask themselves, ‘Why in the world would I want to be part of that?’”

Yet Robinson said if people want to bring about change in the police force, they have to be
willing to be the change in the force, however slow the process may be.

“If we as a community want to see changes in our police departments ... it's little by little. People don't understand that there is an opportunity for change — the department is looking,” Robinson said.

This doesn’t shift responsibility from the police departments though, according to Robinson. He is now a criminology professor and said there is currently a more diverse range of students entering the police field.

Robinson said police departments also have to accept responsibility to ensure their departments are diverse, which in turn will have an impact on the trust of police within a community.

In fact, he said by incorporating diverse students into the ASU PD, they may gain a perspective that can help ASU’s broad range of students feel more included on campus.

“People are there, so I challenge any police department that says not enough people are applying. I would tell them their recruitment efforts are lacking,” Robinson said.

Editor's Note: Stacy Brinson is also an opinion columnist for The State Press, but this article is not reflective of her personal views.