Alexia Isais: Why I am a communist

As communist freedom fighter Leila Khaled once said, 'I have a cause higher and nobler than my own'

As a woman, a Mexican American and someone from a poor and working-class background, many intricate twists and turns made me the person I am today: a communist.

The label “communist” carries a lot of weight on its own. Calling myself a communist is by no means an empty statement — it’s a political identity. It’s incredibly empowering to proclaim myself at a time when anti-communism is ramping up again in response to communism's growing popularity.

From growing up during the reign of former Maricopa County Sheriff Joe Arpaio to discovering the war crimes and atrocities across the world sponsored by the U.S. government's CIA, a multitude of events made me wonder, “Is the system really working?”

That system is capitalism.

By connecting every issue we have today to this root problem, politics become a lot easier to understand, especially when you begin to view your daily life as something interwoven with and inseparable from politics.

Growing up, many tangible problems affected me and my family. My family members had to face racism and discrimination as Mexican migrants, they lost jobs to terrible Clinton-era trade deals including the North Atlantic Free Trade Agreement, and we generally faced economic hardship.

My future was never clear. I never expected to finish high school, let alone attend college. This is how unstable the future is for nearly 50 million people in the U.S., which is the number of Americans who currently live in poverty.

It was hard for me to understand — especially when I was younger — that in "the land of abundance," people could be so easily tossed aside and uncared for. This was especially apparent in a country where corporations waste almost 40% of our food supply with ease while people are starving.

Recognizing the treatment of poor and marginalized people in the U.S. was terrible, and it only got worse when looking to places that the government intervenes in to supposedly spread democracy.

Looking at the effects of U.S. imperialism, I quickly realized as I became a teenager that war is something particularly profitable when it's being waged in the interests of one of the most powerful countries in the world.

Just like his predecessors, Presidents Bill Clinton and George W. Bush, President Barack Obama continued the legacy of violence and destabilization of other countries. He extended the war in Afghanistan, bombing seven different countries in the Middle East and destabilizing Latin America and other Global South regions — something that the sexist and racist billionaire President Donald Trump also maintains today.

To me, Democrats and Republicans are two sides of the same coin.

I had come to understand that to me, it didn’t matter if the president was a Democrat or Republican. In my eyes, they represent the same interests and, tangibly, create suffering in the same way.

One party smiles as it bombs Yemeni children, the other puts on a mask.

One party is blatant about its oppression, the other tries to be the "good guy."

It wasn’t until the polarizing 2016 election that I felt like there was an option other than establishment politicians.

I was incredibly enthusiastic and supportive of Sen. Bernie Sanders (I-Vermont) at one point and really connected with his calls for Medicare for all and universal free college. I began to learn more about wealth inequality and how the rich continue to get richer as millions of people suffer.

This campaign greatly inspired me and kick-started my optimism in not just my future, but in the future of millions of others as well.

But when the Democratic party effectively betrayed Sanders and he threw his support behind the neoliberal "warmonger" Hillary Clinton, I knew that even great and energetic movements such as Sanders’ had their downfalls.

My beliefs became more radical after realizing that maybe I shouldn’t rely so much on the campaigns of individuals running for president. If Sanders got elected, things would improve for a lot of people — but what next, I wondered. How could we be sure that the policies he implements would remain after his presidency is over?

The truth is, with reformist politicians things are never set in stone, especially those that matter most to the working class. People want to be guaranteed healthcare, education, jobs, housing and rights. They don’t want to live in fear of losing these essential things after a presidency is up.

When Trump was elected, he immediately moved to rescind the Deferred Action for Child Arrivals program, continued to build the Dakota Access Pipeline and threatened to pull out of the Paris climate agreement.

For issues that decide the future of hundreds of thousands of DACA recipients, the fate of sacred indigenous lands and the direction of the issue of the climate crisis, it would seem as if their importance is reduced under capitalism to short term electoral issues. These are dire issues that deserve permanent solutions.

Joining a communist party, the Party for Socialism and Liberation, was something that changed a lot of my perspective on this. I’ve been a member of the Phoenix branch for a little over a year. 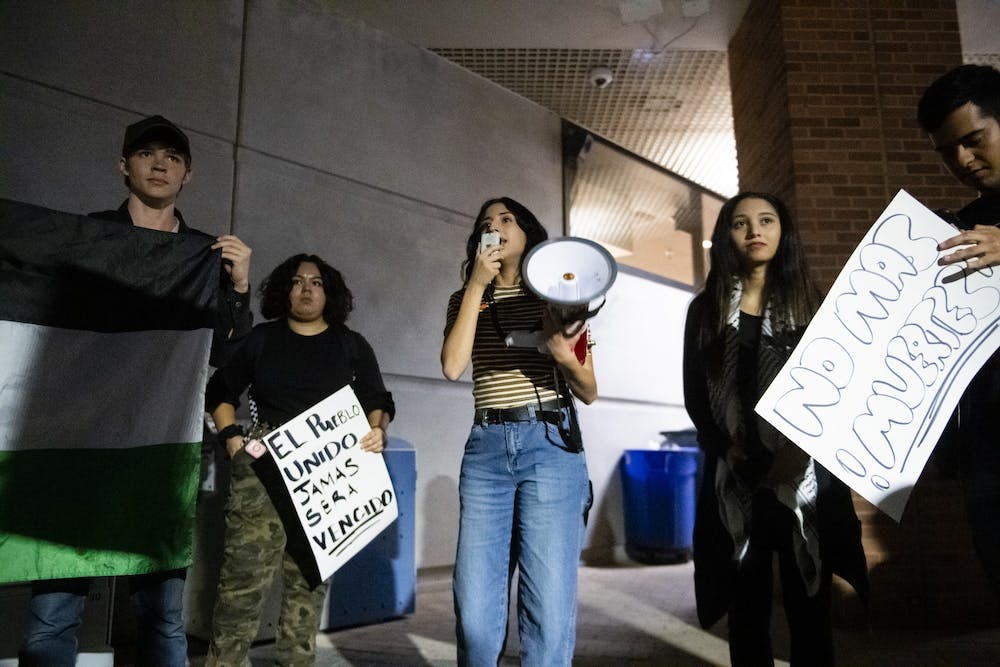 The party believes that “the only solution to the deepening crisis of capitalism is the socialist transformation of society.” A world where the working class and the oppressed are in power is one that can end these issues that are a constant in capitalism. The Party for Socialism and Liberation is at the forefront of struggles to end racism, sexism and war.

Organizing within a communist party, through continuous and persistent work, has made me into a much more optimistic person. Particularly, one who is optimistic for revolutionary change.

These issues are important to mobilize on, especially on college campuses, where students and the community can express their dissent against oppressive forces that have historically gone unchallenged or welcomed onto campus by certain political clubs.

Along with other student Party for Socialism and Liberation members, we started Students for Socialism at ASU with the mission to spread socialism on campus.

As Frida Kahlo once said "I’m more and more convinced it’s only through communism that we can become human." Communism is the only path toward the liberation for all oppressed people, and I am proud to call myself a communist.