Live más: Overnight at the Taco Bell on Apache

At 7:33 p.m. on Jan. 11, 2020, I stepped out of the light of the one-day-waned Wolf Moon and into the sterile yet familiar and homey light of the Taco Bell on Rural Road and Apache Boulevard in Tempe, my base of operations for the next 12 hours.

That place has a certain quality about it, inexplicable yet undeniable. Whether it was after a night of heavy drinking at the Vine across the street or to fuel a late-night study session, that Taco Bell has been there for many students. It is one of the few 24-hour dining spots within walking distance of campus.

I set out to see what wonders and horrors an overnight stay at this cultural hub would yield on a Saturday night. 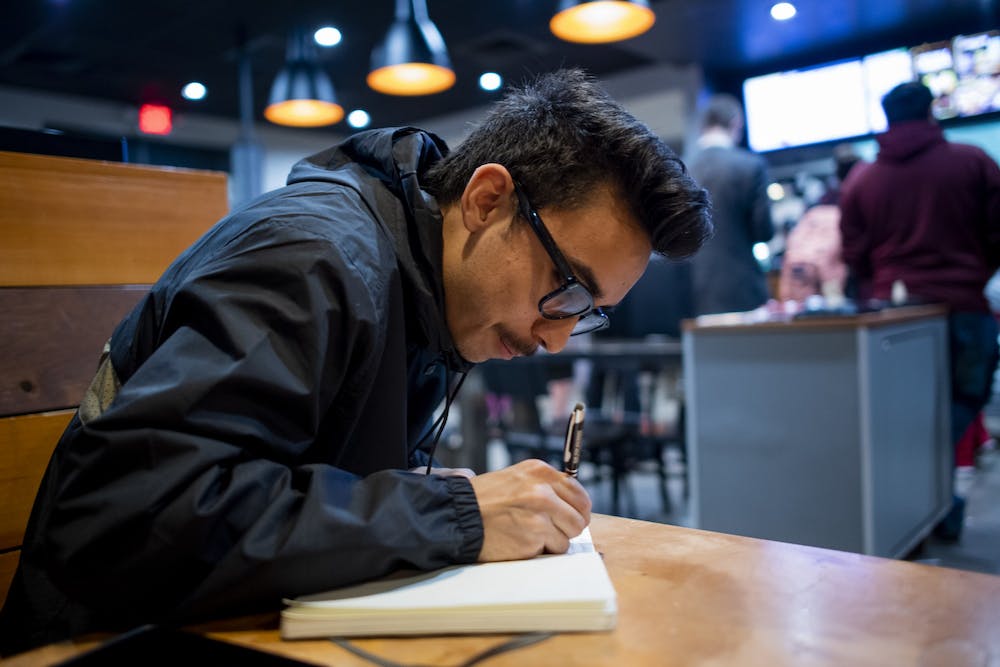 Valerie Moffat
On Saturday, Jan. 11, 2020, at the Taco Bell on the corner of Apache Boulevard and Rural Road in Tempe, Arizona.

7:41 p.m.: I take the second booth from the southeastern corner of the restaurant. Little bits of rice and tortilla litter the tabletop, and I swipe them off. These seats are not built for comfort. Long wooden planks make up the benches on either side of the free-standing rectangular table covered with a glossy finish but completely void of any sort of cushion.

8:05 p.m.: The State Press photo editor and my companion on this journey, Ben Moffat, arrives.

8:18 p.m.: 10 college-aged people sitting behind me within earshot are debating Venezuelan politics, more specifically socialism. They discuss over an incredibly large pizza box that they brought into the restaurant.

8:32 p.m.: “Time to get Baja blasted,” Moffat says, returning to our booth with the nearly iridescent carbonated liquid in his cup and his dinner.

8:55 p.m.: As “Kids” by OneRepublic plays over the murmur of the crowded place, a man in a two-piece gray suit and a maroon shirt settles into one chair of a two-top in the northwest corner of the room. He inserts his earbuds and becomes completely entranced by something he’s watching on his phone. The cook calls “Girardo” three times, progressively more annoyed with each repetition before the man snaps out of his trance and rises to retrieve his food. 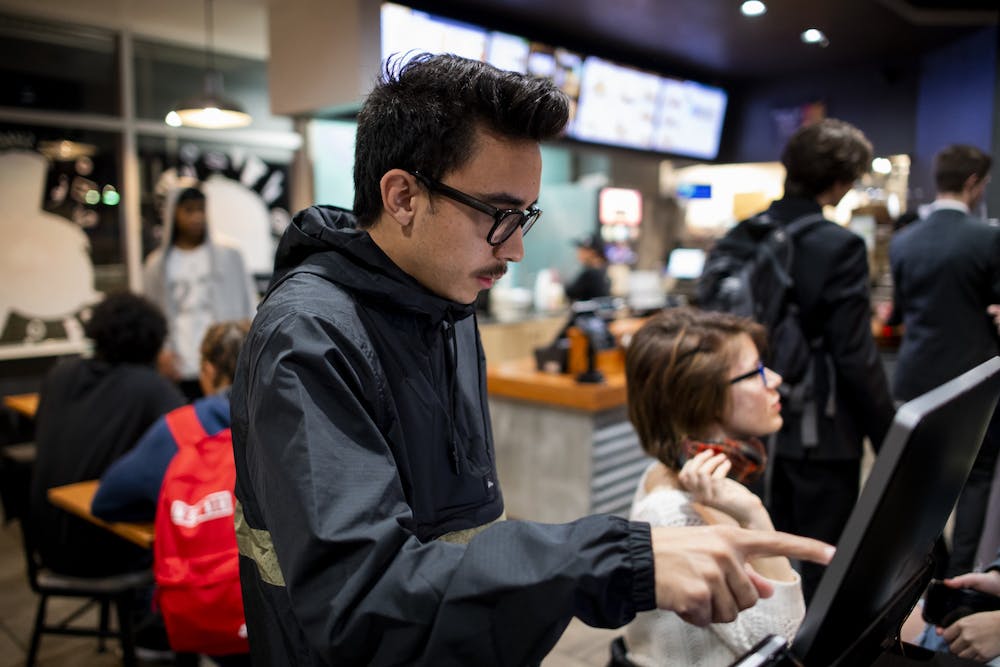 Valerie Moffat
On Saturday, Jan. 11, 2020, at the Taco Bell on the corner of Apache Boulevard and Rural Road in Tempe, Arizona.

10:10 p.m.: The shoeless man spills his drink, vehemently blaming the incident on anyone in the group he came with who won’t protest.

11:42 p.m.: A middle-aged man with a leathery tan is visibly intoxicated. He slams his hands down on a table, begins shouting obscenities and threatens to fight a college-aged man in a blue hooded sweater. The student retreats as the agitated man advances on him, threatening to hit him in the face until the student is forced to leave the restaurant to avoid altercation.

11:47 p.m.: A tall man who appears to be in his early 30s and has tattoos crawling up his neck, behind his ears and down his arms to his fingertips offers the agitated man a seat across from him. The tattooed man rises wordlessly, orders food and hands it across the table to his new friend.

12:15 a.m.: The previously hostile man has sat quietly and peacefully for the past 30 minutes or so across from the man who bought him food, but a manager comes from behind the counter and asks the now calm man to leave. He obeys without protest.

1:54 a.m.: A group of 20-somethings are loudly filming TikToks in front of the soda fountain, drawing the attention of the entire restaurant. One of them takes advantage of this attention to try to spark conversation with a blonde girl sitting by herself. She is visibly uninterested.

3:00 a.m.: A 45-minute wait is announced over the P.A., prompting people to leave in groups, loudly and angrily announcing that they’ll be walking to El Paisano Market instead.

3:12 a.m.: A pizza delivery man arrives and searches the store for his customer, only for it to be revealed that the Taco Bell employees themselves ordered a pizza.

3:19 a.m.: I approach a group of four ASU students for an interview. Two of them are obviously intoxicated, the other two are painfully sober with a maternal annoyance at their drunken companions. The most vocal of the group tells me about some infidelity she got into tonight, with not only her ex-boyfriend but also his best friend. She says she needed some refueling and ended up at Taco Bell.

“We’re here because McDonald’s was closed,” she says.

The self-proclaimed “mom” of their group disapproves of the cheating that took place earlier tonight and keeps urging her friends to keep their voices down.

“My life? My life is pretty f------ crazy,” the alleged adulteress proclaims.

I bid them safe travels back to their dorms.

4:00 a.m.: The employee, who has been on the clock since I arrived, stops to converse. Her name is Zala. She tells the story of a woman who had set up a bedroom in the women’s restroom and refused to leave. The woman invited Zala into the stall with her, at which point she was very sternly told to leave.

This is what Zala considers to be her most outlandish experience in the approximate two months she’s been working at this Taco Bell, though her coworkers tell her she hasn’t seen the half of it. She expresses apprehension at the next coming weekend and the “drunk college kids” that it will bring with it.

“It’s underestimated, what we do here at Taco Bell,” she says. “It’s tough stuff.”

5:18 a.m.: A man sits in the next booth over, the only other guest in the restaurant. He wears a brown leather jacket and a sunburn-turned tan. He mumbles to himself. It's comforting to hear him as he seems to do so to comfort himself and keep himself company. I catch an occasional word or phrase. “Pink Floyd…” “Since 1745...” “Sunrise at night...”

He rises from the booth and throws his half-full cup in the air, spilling dark cola across Zala’s freshly mopped floor. He catches the cup triumphantly then shrugs and leaves unceremoniously.

6:12 a.m.: A bad case of restless leg syndrome sinks its teeth into my exhausted self.

6:36 a.m.: Now that I am within the hour of freedom, time has slowed to less than a crawl. Each second creeps by at a painstakingly slow pace.

Some pop song is playing offensively loud for how early it is in the morning, and Cage The Elephant’s “Ain’t No Rest for the Wicked” trickles from some employee’s phone speaker in the kitchen. Or maybe I’m hallucinating that. I miss my bed.

6:54 a.m.: The first light of day is visible, outlining The District apartment building in a rich indigo. 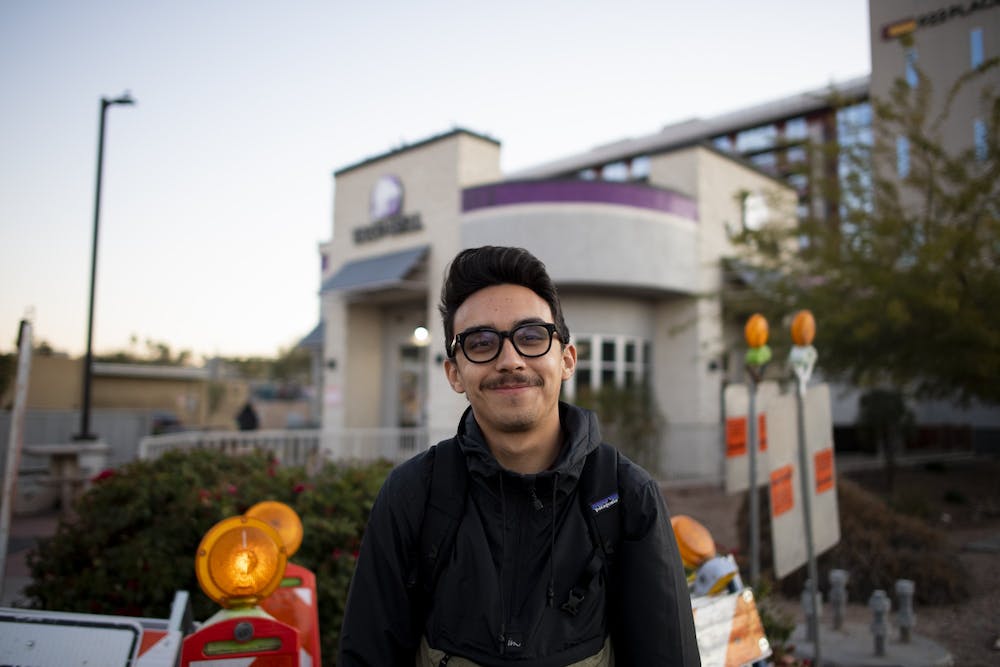 Valerie Moffat
On Sunday, Jan. 12, 2020, at the Taco Bell on the corner of Apache Boulevard and Rural Road in Tempe, Arizona.

At 7:33 a.m., I stepped out of the Taco Bell and into the soft sweet light of the early Tempe morning. The air was cold, crisp and welcoming. I still smelled Taco Bell’s distinct scent on my jacket, and I gulped the fresh outdoor air into my lungs. Beyond feeling freed and relieved, I felt that I had learned some things over those harrowing 12 hours.

All types of people walked into this Taco Bell. They were wearing polished dress shoes, Comme des Garçons Converse or no shoes at all. They were dangerously intoxicated or responsibly sober. Some laughed. Some slept. Some screamed and cursed at the top of their lungs.

People talked about politics or their adventures of the night. Some people flirted. Others fought.

All shapes, sizes and colors of people came to this one place. This place that serves up greasy burritos and vegan Crunchwraps. This place with hard seats and harsh lighting.

It may not be the best food in the world nor the most comfortable of places, but one thing that I learned that night, was that anyone is welcome under that purple bell.