The Arizona Board of Regents met to discuss and vote on several items that Arizona public universities have requested funding for, including overcoming student financial barriers, a large investment in ASU's capital development plan and a study on student-athlete image and likeness.

The meetings were held over a two-day session on Thursday and Friday on ASU's Tempe campus.

The approved funds come with academic success goals for 2025, including increasing student enrollment to 125,000 and the freshmen retention rate to 90%.

The fall enrollment for 2018 was 72,709 across ASU's four campuses, not including online students and freshman retention rate was 86.7%.

Crow said that ASU online was a large part of meeting these goals.

"We think that (the number of enrolled students) is too small," Crow said. "We are 60% of the way there already."

As ASU expands, it has also diversified the way it is able to generate revenue in order to fund its program investments, improvements and expansion. 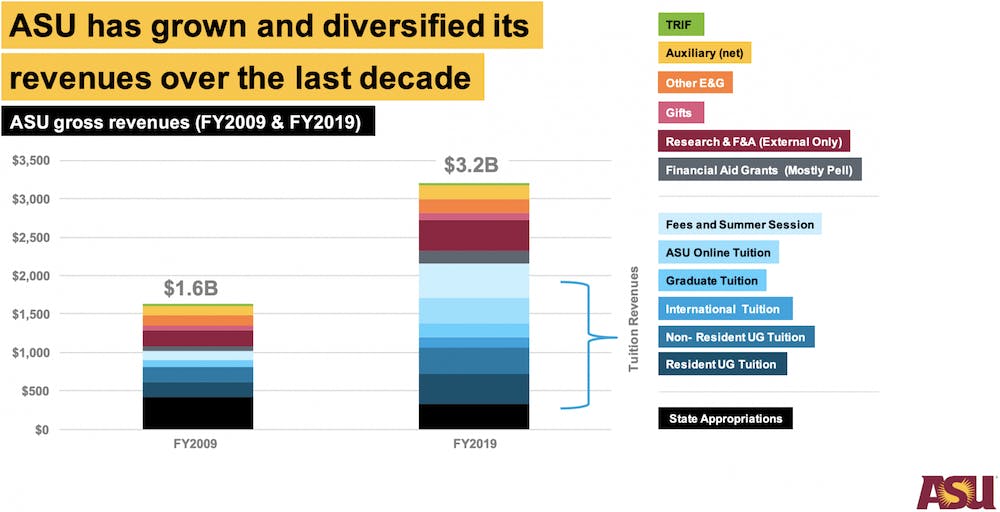 "We are now operating as an enterprise, we’re not relying on our resources coming from an outside entity to have to go after each dollar individually," said Maria Anguiano, senior vice president for strategy at ASU.

Crow: The importance behind ASU investing in students

ASU President Michael Crow's presentation on ASU operations focused on the progress of the egalitarian mission of the University and how the University determines this mission's success.

Crow began with a commitment to ASU's inclusivity for qualified applicants in the state.

"If you are from Arizona and you’re qualified, you are admitted," Crow said.

"Once we eliminated financial barriers, all of the ethnic diversity of the state shows up," Crow said. 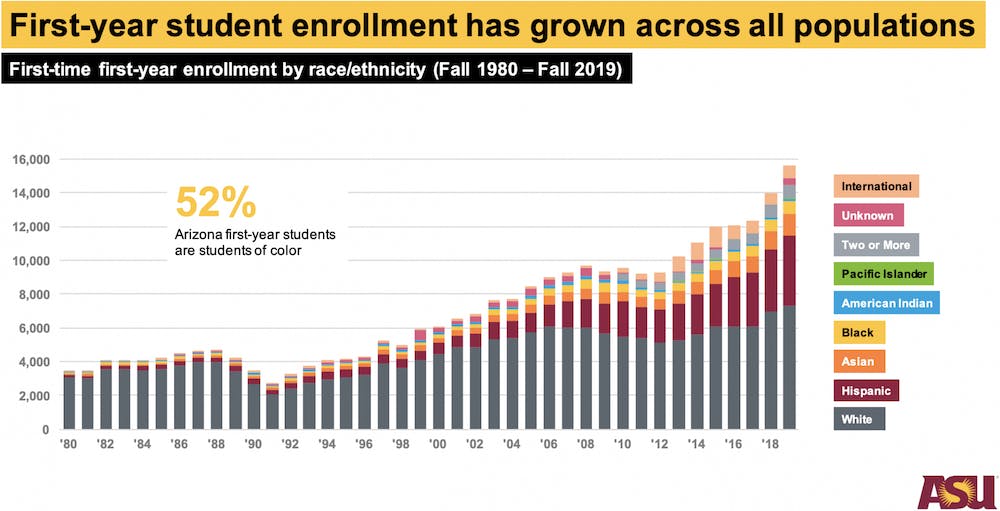 ASU Senior Vice President James Rund noted that many students without the means to attend the University deserved to have the opportunity to enroll.

"There are smart kids everywhere, but they don’t all have equal access to opportunity because of the asset disparity," Rund said.

Arizona has decreased funding to schools over the years, which leaves the universities to find other ways to provide financial aid.

In the request for approval, ABOR said that "because our student-athletes are nationally competitive, state and national coordination and alignment on these issues will be essential."

READ MORE: Shutting Pandora's box: The future of amateurism and recruiting at ASU

California's bill allowing student-athletes to be compensated for using their image and likeness is the first legislation of its kind in the U.S. The bill does not take effect until Jan. 1, 2023, and the NCAA has asked the divisions to create rules surrounding the issue by January 2021.

Cheng has recently been under scrutiny after a state audit found that she had failed to properly document travel expenses and was subsequently reimbursed by NAU.

Calli Jones, president of NAU Young Democrats and a junior studying political science and criminology, participated in the protest and voiced grievances from a coalition of several student groups against Cheng.

"Critical services have been cut," Jones said. "We don't even have a pharmacy on campus anymore. The lack of mental health services on campus is horrendous and it has created a crisis on campus."

ABOR did not comment on the matter in the public setting, and it is unclear what the board intends to do about the student coalitions request for the NAU president to step down.

"We have continually said we will not meet behind closed doors. We are calling for a public forum with students and community members," Jones said.