USGT hosted Maricopa County Recorder for town hall to inform voters of how, when and where they'll vote

New voting technology will be used across Maricopa County this election season, with the hopes of making voting across the county more efficient and effective.

The Recorder's Office, whose main responsibilities are to record documents and administer elections, displayed the new election technology at ASU's campus in an attempt to reduce first-time voter anxiety.

The new system will provide a more efficient and effective way to check voters into their precincts and cast their votes, according to Maricopa County Recorder Adrian Fontes.

Poll workers slide a special card into the bottom of a large touch screen computer, allowing the voter to access their specific ballot after they've checked in.

Once the voter selects the candidates for each office, a copy of their choices is printed and deposited into a tabulator where it is officially counted.

While the computer system has proven to work and there are fail-safes in place in case the internet stops working, the computers die or other issues arise, students who tested the system are still questioning its integrity and efficiency.

"(The equipment) is still sort of scary for new voters," Cameron Decker, a freshman studying civic and economic thought and leadership and global agribusiness, said. "Your vote is being recorded electronically but isn't officially counted until the machine spits out the paper and you run it through the tabulator."

Despite his initial concerns, Decker said that overall the system is "a great technology" and has the ability to reduce wait time during the busy parts of Election Day.

The computers have the capability to change their language from English to Spanish, increase text size, adjust brightness and have headphones and large external buttons for the visually impaired.

Voters can choose a sip-and-puff option if they are unable to use the touch screen.

After the equipment demonstration, Fontes and attendees moved inside for a presentation and Q&A session.

Thank you for coming out! We all learned so much at the event! https://t.co/UEEolgGccJ

Fontes thanked the legislature for their efforts in changing policy that allowed him, his office and the Department of Elections to count early mail-in ballots and make the upcoming presidential preference election one race.

"Everyone in Arizona wants Maricopa County to have the best elections possible," Fontes said, emphasizing that the county is the third-largest voting jurisdiction in the country. "We've come together to work together to make this happen. All of these improvements have been made from both sides of the aisle."

Fontes explained that the presidential preference election is different than a primary because political parties pick who's on the ballot.

This year, there is only one party election because Republicans withdrew in order to protect President Donald Trump's bid for reelection.

The presidential preference election will take place on March 17. Once Arizona makes its preferential choice it will be taken into consideration by the state's leaders as they vote at the Democratic National Convention for the candidate who will appear on the general election ballot.

Rather than filling in arrows, voters will fill in ovals if they decide to use a paper ballot. Instead of 60 voting locations, there will be over 200 across the county. The number of check-in monitors will triple from two to six, a minimum of seven poll workers will be stationed at each location, one of them as a dedicated line manager. 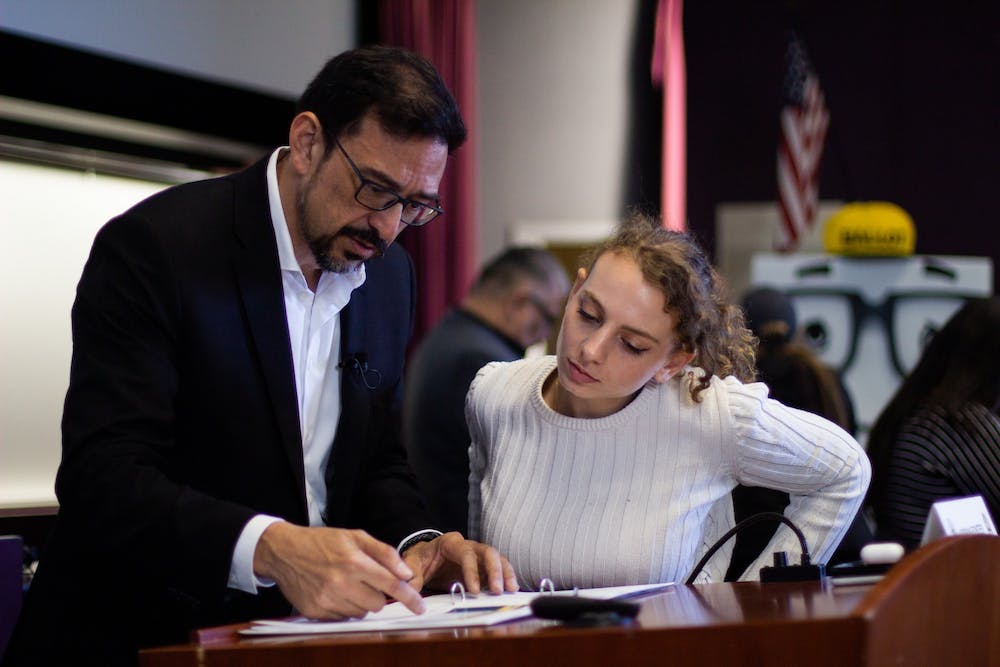 In addition, all training for poll volunteers is in-person and followed up with a short online course closer to Election Day.

This year, Fontes focused on reaching out to people of color, students and disabled voters. With the help of the County Recorder, the Department of Elections is working to put together comprehensive information about voting, who's running, where polling locations are and election results.

During the town hall, Fontes thanked his staff and reminded the audience that "it's not all paper ballots and technology ... it's real people that make this stuff happen."

Students who hosted the event were excited about the partnership to get more students civically engaged, not just on social media.

"I encourage students to participate — learn more about the issues, attend these events, read the news before making your decision," said USGT Director of Civic Engagement Justin Heywood, a senior studying political science and civic and economic thought and leadership.

University students liked how the event not only showed them the new technology but told them about the changes that are happening to an important part of being American.

"The 2020 election is integral to the longevity of our political system," Decker said.

Decker believes the president's visit this week and the Democratic debate in March "really goes to show that Arizona is a battleground state in the presidential election," he said.

Students and community members left the event understanding the difference between the presidential preference election and a primary and said they were ready to go to their polling location on March 17.

"I don't really have a comment as to which way people will vote, I just want them to vote," Fontes said.