The event, which marked his second official post-election rally in Arizona, had thousands of people in attendance

President Donald Trump rallied his Arizona base and stuck to his traditional talking points, including immigration and the economy, while tensions rose between protesters and supporters Wednesday night.

Supporters started lining up outside The Veterans Memorial Coliseum yesterday. The venue, which can hold more than 14,500 people, was full, and thousands of attendees were placed in the overflow area. While no crowd estimate was immediately available, Phoenix police tweeted that the inside of the venue had reached capacity before 6:30 p.m.

Trump's remarks at the “Keep America Great” rally were filled with criticism against Democrats and one evident goal: reelection.

Trump’s speech went for more than an hour and covered over a dozen topics, including the economy, impeachment, immigration, trade and various 2020 elections, like his own and the upcoming Arizona Senate election between incumbent Sen. Martha McSally and Mark Kelly.

“I don’t think the Republican Party has ever been more unified than right now,” Trump said, drawing large applause from the audience, one of many ovations throughout the night.

Trade has been among Trump’s most prominent talking points, and he recognized that one of the main reasons he ran for office in 2016, was because he wanted to take down the North American Free Trade Agreement.

He boasted that American manufacturing and exporting have moved back to the U.S. and that unemployment is at an all-time low in various communities such as African American, Latino and disabled populations.

Among discussions of 2018 legislation that allowed farmers to give their land to their children with no hoops to jump through, President Trump discussed newer initiatives including his new military branch, the Space Force. 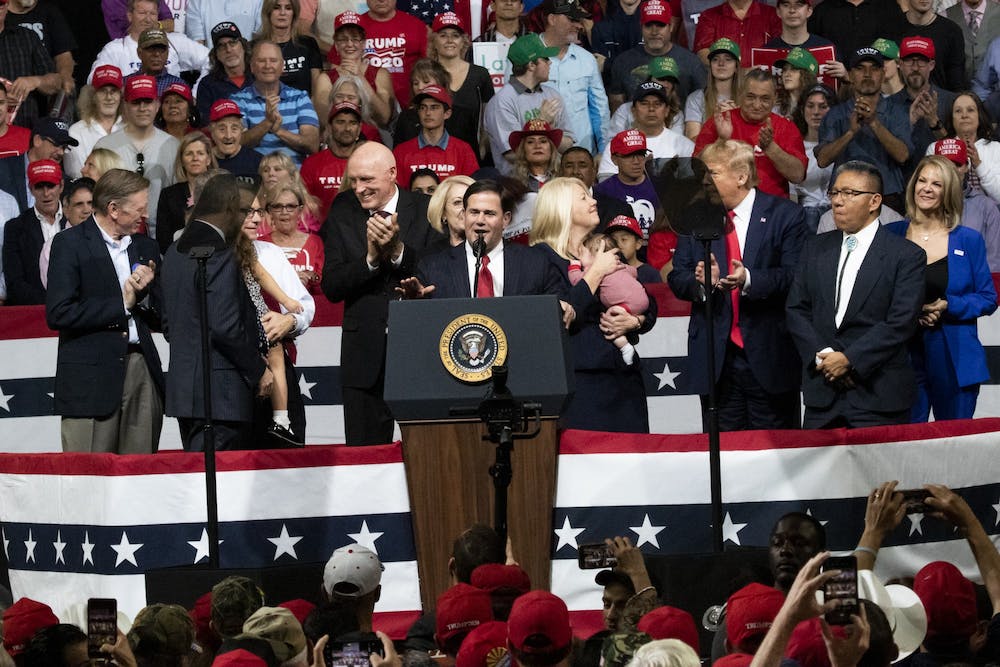 “We will be the first nation in the world to plant our flag on Mars,” Trump said.

He added after discussing progress on the border wall and immigration policy that “thankfully, Arizona bans sanctuary cities,” a controversial decision to ban places that would limit their collaboration with the federal government’s effort to administer immigration laws.

He added that it was hard for him and his fellow Americans to see Democrats in office and in control if “they couldn’t count the votes in Iowa.”

Protesters, while not particularly large in number, represented a vast array of issues, with some draped in Bernie Sanders and Andrew Yang apparel, and others speaking out against the border wall and freedom for Palestinians.

ASU students were among the thousands in the Coliseum and outside.

Emel Mahadi, a junior studying biomedical sciences and psychology, said they showed up to share their voice, adding that it's valuable to speak out instead of not coming to the rallies, even if they're meant to support Trump.

“I think it's important for both sides to show out because I think we need that type of like conversation and just to show people that it's OK to come to places where there's going to be a lot of Trump supporters who don't have the same point of views as you,” Mahadi said.

Some protesters showed up in support of others who could not attend, like senior Mariya Nowak. 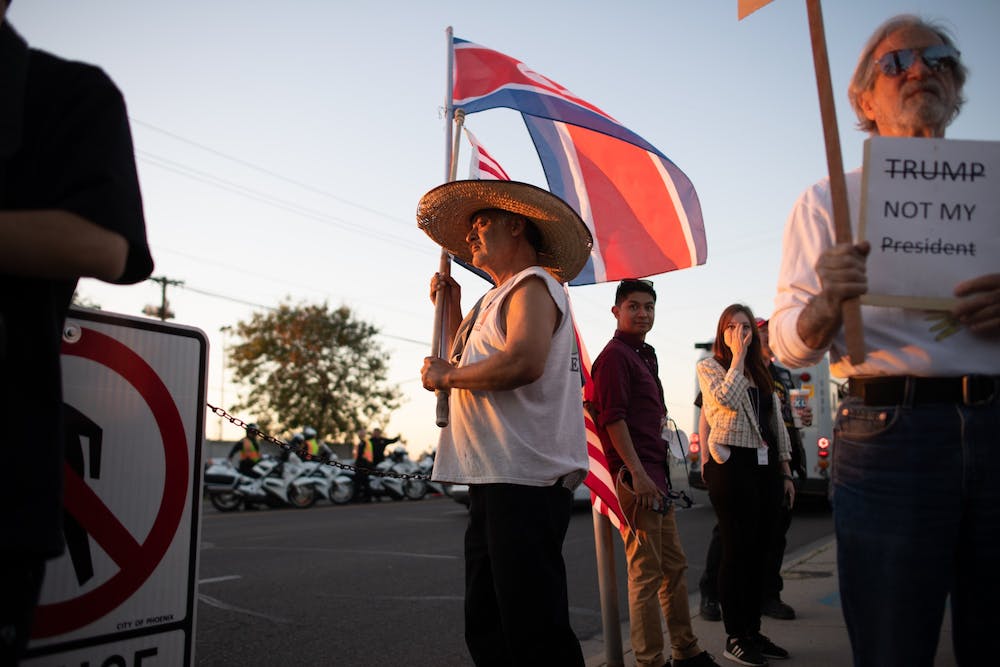 “(I came) just to stand in solidarity with everyone that Trump harmed through his presidency, people of color, immigrants and women,” Nowak, a medical studies major, said.

Also protesting were ASU alumni like Richard A. Smith, who graduated in 1974 and said he was there because of Trump’s lack of respect toward veterans — specifically, his treatment of Vietnam war veteran and late Arizona Sen. John McCain, who Trump often criticizes.

Smith also noted he is one of more than 2,000 former Justice Department employees who called for Attorney General William Barr to resign because he believes Barr is acting as “Trump’s personal attorney.”

“The attorney general is not the president's personal attorney, they are the people's attorney,” he said.

While Trump did not directly address climate change, he did discuss rolling back government protections and his approval of the Keystone XL and Dakota Access pipeline, which upset climate voters including Philip Rubaines.

“It's very important to keep in mind the imminent climate collapse that is going to occur if we don't make big moves in the next decade,” said Rubaines, a junior studying anthropology.

Gov. Doug Ducey, an honorary co-chair of Trump's reelection campaign, accompanied the president on the way to his rally.

Ducey joined Sen. Martha McSally and Rep. Debbie Lesko on stage with Trump during his remarks.

Ducey thanked Trump for all he’s “done for the cause of life,” for reducing regulations and for his Supreme Court nominations.

McSally pledged to introduce legislation on pharmaceutical costs, adding, “I heard your call, you said to put a bill on your desk to lower prescription drug prices and I’m going to introduce a bill next week to get that done."

Also in attendance, Rep. Paul Gosar, spoke to students at a tailgate prior to the rally and stressed the importance of educating young voters on the differences between capitalism and socialism. He added that Trump has lived up to many of his campaign promises.

Gosar said Trump identifies with everyone who feels neglected, and that Trump's critics dislike him because “he’s not taking no for an answer” when it comes to doing what’s best for America. 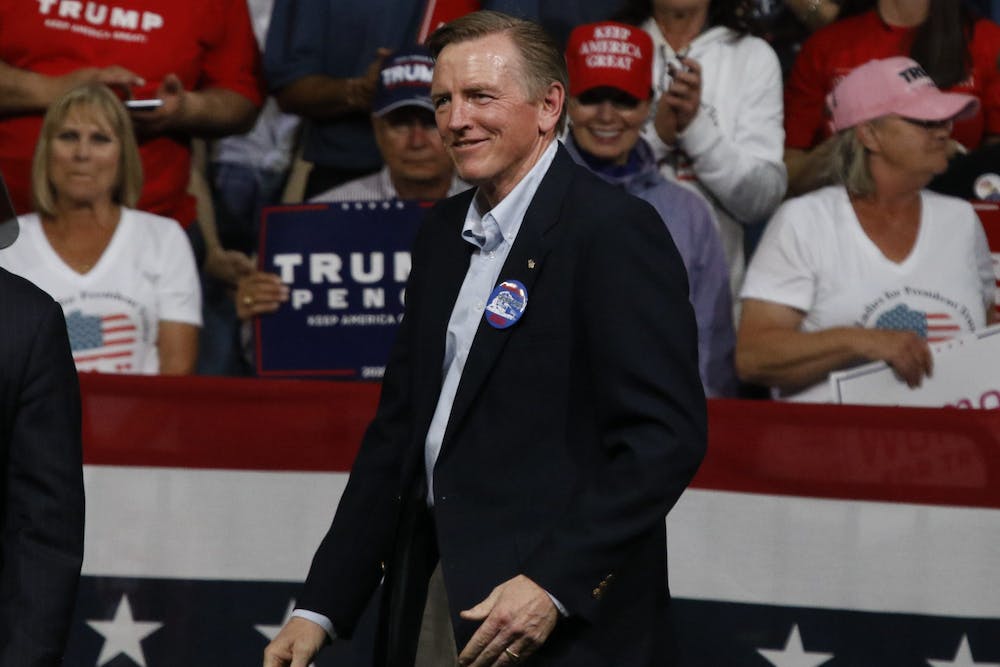 While many campus political groups were not in attendance Wednesday, they still released statements on Trump’s visit to the Valley.

"Arizona College Republicans is proud to welcome President Trump to Arizona," wrote Judah Waxelbaum, chairman at Arizona Federation of College Republicans and a junior studying political science, in a statement. "Under his leadership, we have experienced record-low unemployment and a thriving economy. We look forward to working around the clock to reelect the President and electing Republicans down the ballot this November."

The ASU Young Democrats and Young Democratic Socialists of America at ASU did not attend the rally or protests and instead visited a forum for Tempe mayoral candidates.

“With the mayoral elections coming up, I know that my organization and YDSA are trying to put as much energy into that as possible,” said Cameron Adams, vice president of ASU Young Democrats and a sophomore majoring in global studies. “That’s where we can make the most change, where there’s a forum.”

Students for Trump at ASU, who hosted a tailgate for the rally with Gosar, declined to comment.

David Howman, president of College Libertarians and a graduate student studying justice studies, said that Arizona has changed from a reliably red state to one that's more of a toss-up.

"It seems that the voting population here is looking for something different and more unique in terms of the representation people are looking for in politics," Howman said. "We hope to be that representation and be that new path forward."

Is there something you want to see us cover that we haven't? Email editor.statepress@gmail.com.