As thrift shopping hits the mainstream, students weigh the pros and cons of shopping secondhand

Every Monday, Savers thrift stores discounted their clothes at half off. And every Monday, Kaylah Melendez, a sophomore fashion major, was there.

From a young age, Melendez and her father would make weekly trips to the thrift store. As her father shopped around for clothes for his family in Jalisco, Mexico, Melendez wandered the endless rows of clothing racks in search of the newest addition to her wardrobe.

“He gave me so much liberty when it came to roaming around the store at 8 years old,” Melendez said. “I could buy whatever I want(ed) as long as it was, like, a dollar.”

Her weekly trips to the thrift store jump-started Melendez’s interest in fashion. She would alter her clothes before she knew how to sew by cutting, cropping and hot-gluing garments together.

“That’s what he could offer me, so that’s what we did,” she said. “I would be ashamed of it because I felt like it was saying that I'm in the lower class, like ... that was a bad thing.” 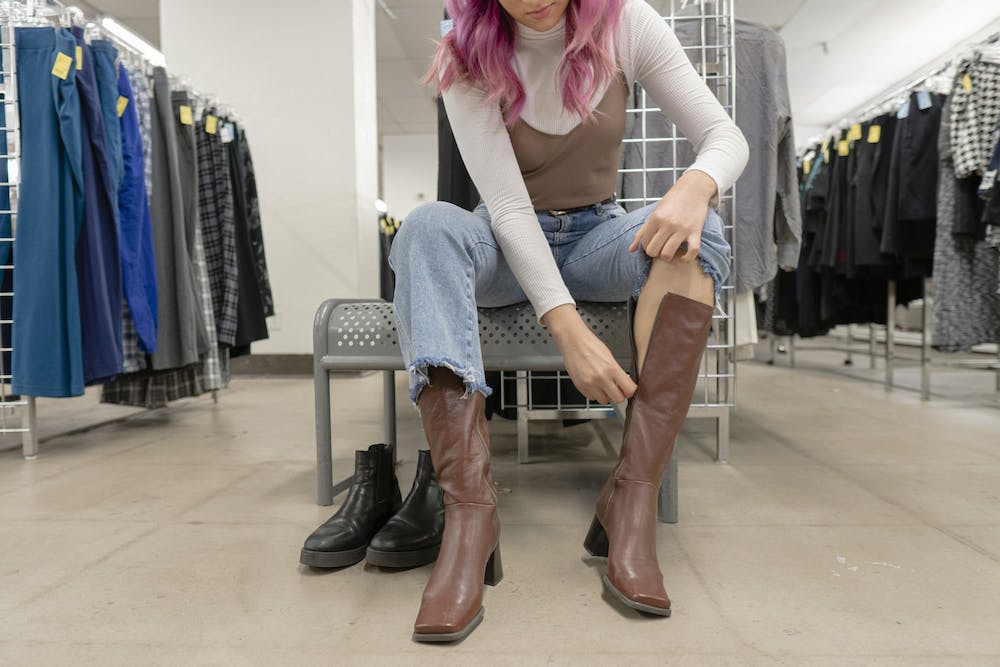 Now, Melendez sits sporting a black tasseled blouse and a pair of trousers; she now thrifts most, if not all, of her clothes. Becoming the operations director of ASU Business of Fashion has allowed her to see the whole picture.

“I saw a change where saying, ‘I bought this at the thrift store,’ was more OK,” Melendez said.

As thrift shopping and reselling started trending among the fashion savvy and environmentally conscious, many low-income communities have struggled to shop secondhand in the face of rising prices.

According to the 2019 ThredUp resale report, more than one in three Gen Zers will buy secondhand and 51% of all consumers plan to spend more on secondhand clothing in the next five years.

The report also predicted that the secondhand market will double, with an increase from $24 billion in 2018 to $51 billion in 2023.

Typing “thrift” in the YouTube search bar instantly generates thousands of videos. Titles like, “PROBABLY MY BEST THRIFTING TRIP EVER,” or “HUGE THRIFT HAUL,” pepper the page — most in all caps and each more exciting than the last.

Most follow the “thrift with me” format where YouTubers bring their cameras with them on shopping excursions. Some even include try-on hauls, showing what they bought and how they styled the piece.

Many accounts and hashtags are solely dedicated to thrift shopping.

“You can say ‘I thrifted it,’” Melendez said. “That’s in your comments, and everyone sees that and it becomes normalized.”

“It’s going to go from being a trend to being the norm,” Lorena Witte, a junior studying fashion and the vice president of ASU Business of Fashion, said. “More and more people are going to ditch fast fashion.”

As an employee at Buffalo Exchange, Witte has also noticed sales increase from year to year as secondhand shopping grows in popularity.

She said it’s “definitely a result of climate change and a general fear about the world.”

The emphasis on thrifting in popular culture is reflected in academia as well.

The fashion program at the School of Art incorporates secondhand shopping and recycling into their curriculum, bringing an increased awareness to the student body.

“Many of our students, once they start really learning about the effects of fast fashion (and) the effects of the industry in general, have made commitments to only purchasing either ethically sourced pieces or committing to only buying recycled, secondhand and vintage,” fashion professor Dennita Sewell said.

Thrifting's popularity continues to climb, but as those from upper-middle to high incomes increasingly shop secondhand, many note a difference in perspective.

According to a 2010 Pennsylvania State University study by Spencer James, a researcher at Brigham Young University, lower-income families see secondhand shopping as a necessity, whereas higher-income shoppers view it as a commodity.

“The upper class essentially sees it as a toy store. Something to find stuff that's fun, like a kind of playground,” James said. “Yet we have a lower class that sees that as one of the last few places where they can afford to buy the goods that they need to maintain their standard of living.”

James and his colleagues conducted the study after a major employer in their county shut down, leaving many families in financial distress. The study measured families’ participation in thrift economies and found that both thrift stores and yard sales provided many of the necessities families needed to survive.

Though James conducted the study a decade ago, he feels the results have only become more relevant, especially as thrift stores become a more prominent shopping alternative.

“This can have the deleterious effect of rising prices and thereby pricing the poor out of yet another place where they could potentially access the commodities that they need to maintain their standard of living,” James said.

Several discussion boards across the internet also share price increases in their local thrift stores and speculate the cause.

“What is this thrift store smoking?... At least scratch the clearance tag off!” she said in a Reddit post.

Many believe the high volume of new “thrifters” drives prices up in  chain thrift stores such as Goodwill.

In a 2010 donation valuation guide, Goodwill Industries estimated flat prices based on the item. But, in 2020, the valuation guide includes a range of prices.

The difference in the two reveals that prices are increasingly focused on the maximum a customer would pay for a good, or how it’s priced in retail or other resale markets.

Ethan Tan, a Depop seller and ASU alumnus, has been thrifting to resell since 2016. He’s amassed about 30,000 followers on his account, Fun/Cool Vintage, and now uses the app as a full-time job.

Sitting in a retro-style robot graphic tee and vintage Levi’s, Tan described his process of picking out the best finds at the thrift store. Sometimes, he just knows.

Tan resells vintage T-shirts, jackets, jeans and the occasional pair of shoes. His prices range from $15 to $1,250. The highest priced item on his page is a signed vintage Suicidal Tendencies band tee.

He frequents Goodwill, Savers and other local thrift stores for his finds. In his expeditions, Tan also noticed an increase in thrift prices.

Though many argue that shopping to resell could be a contributor to the inflation of secondhand prices, Tan believes it is not the fault of resellers, but the fault of the corporations implementing price increases.

Tan also weighs the environmental benefits when he is thrift shopping and reselling. Because of this, he finds a significant portion of his inventory at the Goodwill Outlet store, known to resellers as “the bins.” Goodwill Outlets sell retail rejects by the pound. 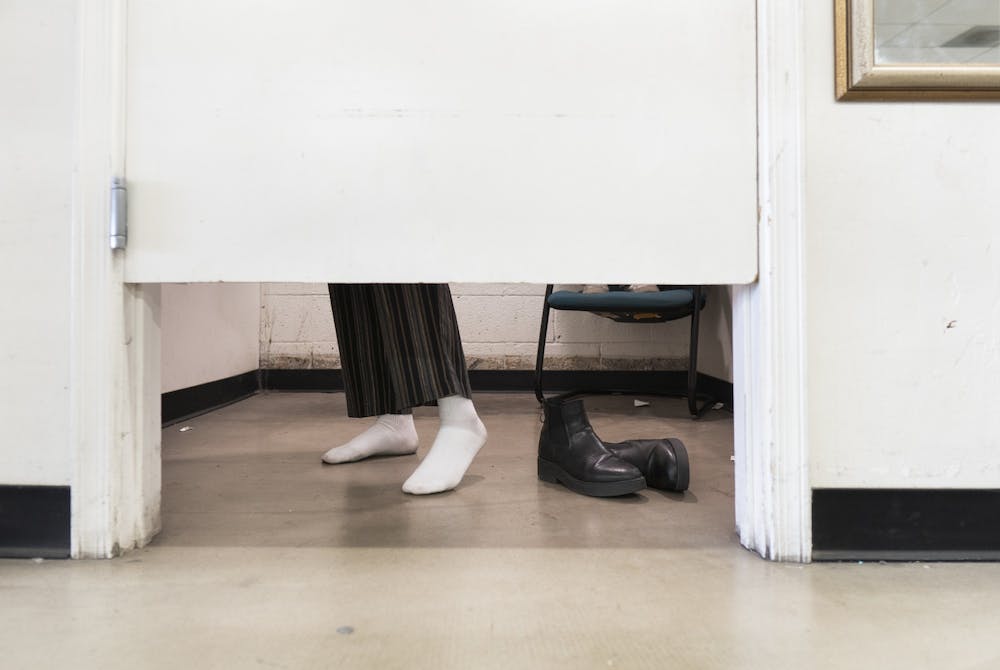 “It's like the last step before it's either sent to recycling plants or thrown away,” Tan said. “There's enough stuff for everyone. Just seeing the amount, it seems logical that this is where the fashion industry is going.”

Similar to Tan, Melendez also sees thrifting as a possible means to an end, but keeps in mind the likely cost.

“We've made this problem that's really hard to solve where we've just made too much (clothing) and it all just has to get thrown out eventually,” Melendez said. “But we've seen that thrift store prices have gone up because they've become more popular, and that just sucks for people with low incomes.”