A 2016 memoir, "Hillbilly Elegy: A Memoir of a Family and Culture in Crisis" by J.D. Vance, has gained popularity again as people across the country await its upcoming Netflix adaptation.

The memoir recounts Vance's life growing up with his Kentucky family in Ohio; tackling his experience with poverty to observations of addiction in Appalachia. His stories ring deafeningly loud of learned values like loyalty, responsibility and tough love.

Appalachia is the eastern cultural region spanning 13 states, from southeastern New York down the Appalachian Mountains, all the way to the northern parts of Alabama, Mississippi and Georgia.

Vance takes a few chapters to criticize those he thought were profiting off of the poor while his family struggled. And an even larger part of the book attempts to explain Appalachia's political swing in the 2016 presidential election highlighting the supposed agenda of the rural, white working class which includes everything from stereotype to truth.

The book blames or, depending on how you read it, thanks the region for electing President Donald Trump but does so without breaking down voter suppression in the region and the lack of broadband internet for researching candidates. Instead, Vance leans on the "out-of-touch" title the region has garnered.

Whatever the facts are, it doesn't seem fair to me to make broad generalizations about any region, something the book does and almost prides itself on. By doing so, you cut off that community from having a voice, from defending itself against first impressions.

Before I moved out of Kentucky for college, I never envisioned myself constantly defending where I come from. Like many Kentuckians, I'm really proud of my stomping ground. I recover when I have to brush off jokes about liking bluegrass music, being a former horse girl, having a sometimes detectable southern twang.

It's not that I don't want to, or that I want to stop defending where I'm from. I just feel like I shouldn't have to.

Vance is a veteran, author, commentator and graduate of Yale Law School — a fact he makes abundantly clear and questionably all-important. He's since joined a venture capital firm, and there have even been rumors he's considering running for public office.

Other critics of the book have noted that Vance only spent summers with his grandparents in Appalachia, not giving him the supreme authority to be the voice of the region that he eventually became. 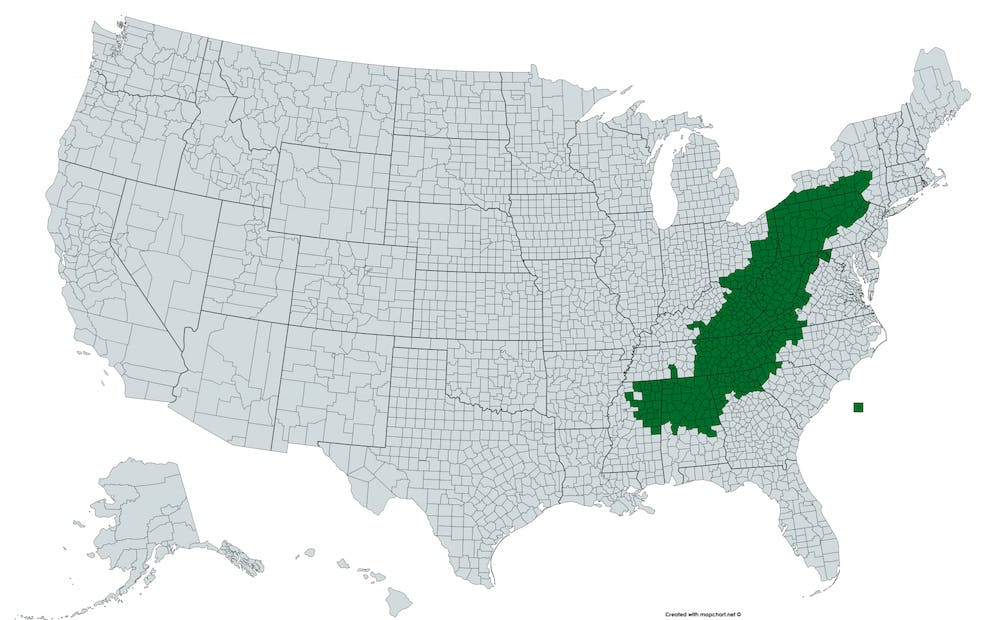 A map highlighting the Appalachia region of the U.S. published on Tuesday, April 21, 2020.

The book, featuring a sociological construction of what Vance thinks Appalachia is, was a national bestseller for years. Critics and book lovers from outside the region said it was a perfect window into the white working class, an insider look at what makes Appalachia tick.

But "Hillbilly Elegy" isn't profound. The book asserts that because one person made it out of "broken" Appalachia, everyone should be able, and is expected, to do the same. Its primary argument is that poor people suffer because they don't know any better.

The story relies on personal anecdotes with pronouns like "I" and "me." However, Vance swiftly changes to pronouns like "us" and "we," consolidating his life story with the rest of Appalachia's.

I don't want to demean J. D. Vance's experiences — I do believe that his struggles are and were real. The issues and struggles in the book are important, but the book itself is not. None of the challenges Vance touts are special to "hillbillies."

Appalachia is no different than the rest of America, and the prospect of Netflix — or any other producer, frankly — rounding out the edges of an entire community for funding's sake, or whatever it may be, seems unethical.

Vance's writing shows that he may have a seriously narrow view of not just Appalachia but the world. I'm afraid that any film adaptation would have the same tone, putting the region at an even higher risk of death by stereotype.

The book fails to recognize the cultural diversity of Appalachia, a region that spans 13 states, as well as a history of racial and economic inequality. Vance uses a disenfranchised argument to say that hillbillies need an elegy in the first place implying that they need mourning or reflection for themselves and their lack of what he sees as opportunities to thrive.

His memoir bashes the entire region with shocking ease and gives a false impression of what the people of Appalachia are really like. The book reaffirms negative stereotypes for anyone who might not be familiar and that's really dangerous.

It stings knowing that someone I might sit next to in the fall would ask me where I'm from on the first day, and they won't get to know me because they think they already know.

People love to talk about Appalachia, but they often aren't willing to listen. Hollywood and mainstream media continue to hyper-fixate on one piece of the South and on Appalachia, trying to tell the stories of offbeat people or sometimes the systematic struggles they face.

It seems that in the case of "Hillbilly Elegy," research wasn't a priority, however. The memoir and the soon-to-be-released film will leave a lot of people in the dark about the details they apparently want to know.

I think the unprecedented situation we're in today is not the time to combat personal life struggles, especially when there's no shared life story anymore. I do think Vance's struggles are real and shouldn't be dismissed. But with that being said, the only way I can think of to rebuild the narrative of Appalachia, or rather construct one with more accuracy, is to recognize this memoir for what it is.

Ron Howard, the adaptation's director, calls Vance's book a "self-actualization story." But in actuality, it is 260 pages and what is to be an hour-and-a-half-long display of one man's self-righteous need to display the lower class.

Stereotypes aren't the full picture, and there are so many other resources with research and a multitude of perspectives. Don't read Vance's memoir and don't watch the movie when it gets added to Netflix. If you're truly interested in reading about an Appalachian experience, reach for "What You Are Getting Wrong About Appalachia" by Elizabeth Catte or "Ramp Hollow: The Ordeal of Appalachia" by Steven Stoll.