ASU baseball super fan and donor Dave Rasley has amassed a sizable collection of Sun Devil baseball memorabilia. While many individuals may keep these items or sell them, Rasley finds a way to gain a greater appreciation for his baseballs, bats, jerseys and tickets: by giving them back.

Rasley, who has been around the ASU baseball program since coming to Tempe as a student and prospective baseball walk-on in 1972, connects with players from the past and present to ensure his belongings find an appreciative owner.

“Sometimes, the players don’t really get it at the time they are playing," Rasley said. "To them, having a team-signed ball doesn’t mean that much. They sit down and sign them for people, but maybe they don’t understand the significance of it until later. Maybe 10 years later, they’re like, ‘Crap, I don’t have any memorabilia.'"

Everything from a baseball signed by the 1986 team to a bat signed by the 2006 team to bats that were used by former Sun Devils Oddibe McDowell and Bob Horner can be found in Rasley's collection.

His collection earned a major boost after acquiring a box of team-signed baseballs and a few bats from a close friend.

"I spent a bunch of time trying to go through them, trying to figure out the year (the balls were signed)," Rasley said. "A lot of the ASU information (from back then) is not online, so I had to get some of the people over at the athletic office to dig out some of the old rosters, because I was trying to match up the signatures to see who had actually signed these balls." 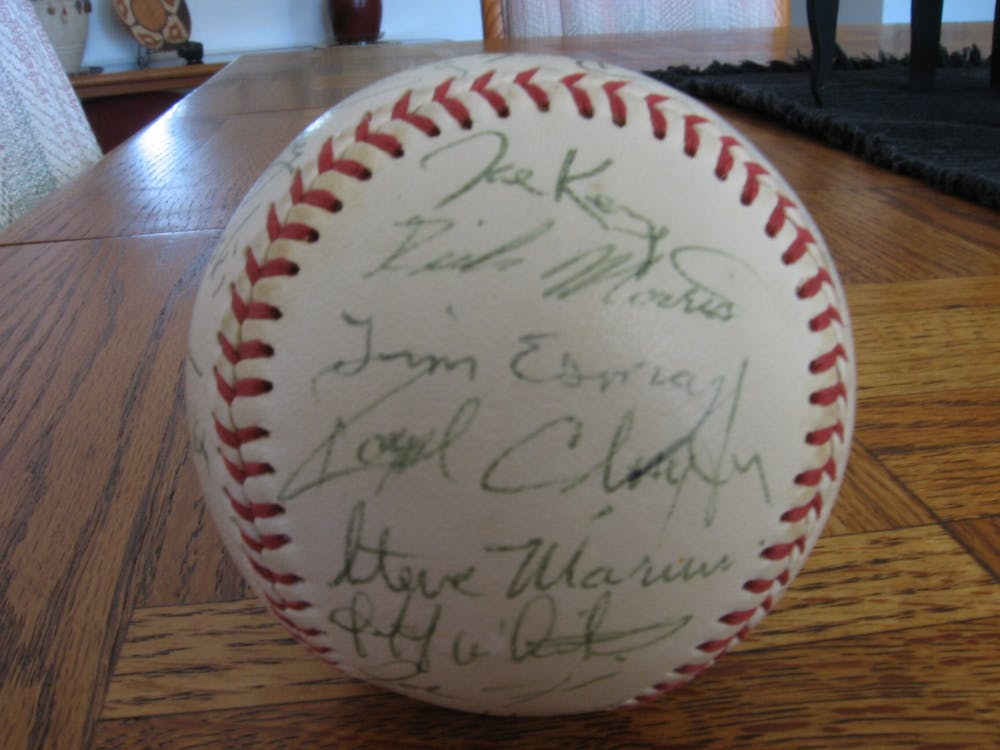 After diligently sorting the memorabilia, Rasley knew what he wanted to do with much of the collection.

"After I got them all sorted out and figured out who signed them, my mission was to connect them with players," Rasley said. "I love doing stuff like that. Some of this stuff, I love having it, but it means more to me if I can get it to somebody where it actually means more to them." 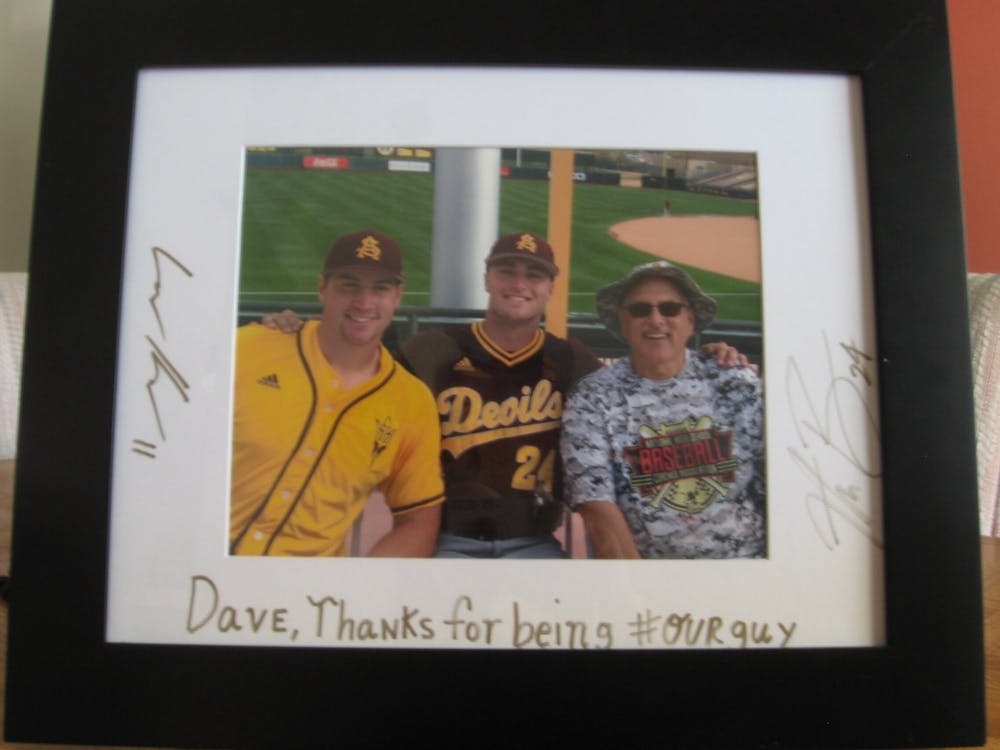 Dave Rasley (right) poses with former Sun Devil baseball players Hunter Bishop (middle) and Connor Higgins (left) at Phoenix Municipal Stadium in Phoenix, Arizona in a photo gifted by Bishop and Higgins to Rasley. The photo is titled "Prize of My Collection" according to Rasley.

Throughout the almost 50 years Rasley has been around the Sun Devil program, the former Tempe High School teacher has many great memories of sharing his collection with former players and their families.

One of his favorite memories is an interaction he had with former ASU outfielder Hunter Bishop and his family. Rasley got to know the Bishop family due to the mothers of Rasley and Bishop having both been diagnosed with Alzheimer's disease.

"I asked his dad if he wanted a bat I had for a trophy case," Rasley said. "He said Hunter was always giving him crap for only having baseball stuff from his brother, Braden, and didn’t really have anything for Hunter. I was thrilled to be able to give that to him."

Rasley acquired the 2006 team-signed bat, which includes the signature of former Sun Devil and current Milwaukee Brewer Eric Sogard, in an unorthodox fashion. After winning a player's jersey following ASU's "A Shirt Off Your Back" game toward the end of the season, the player's mother asked Rasley if she could buy the jersey back.

Rasley's 2006 team-signed bat was acquired from a Sun Devil player's mom in exchange for a game-worn ASU jersey.

"I told her I didn’t really want to sell it," Rasley said. "She said, ‘What if I go get a bat signed by the team, would you trade it for that?’ She then ran into the locker room and got the bat signed by everyone on the 2006 team."

If Rasley had to choose his favorite piece in his collection, he would point you toward a picture of Bishop, former Sun Devil Connor Higgins and himself at Phoenix Municipal Stadium. It was gift given by Bishop and Higgins with an off-hand reference to a phrase Rasley uses in ASU baseball Twitter circles: #MyGuy.

"Partway through the season a couple of years ago, they both came over to me and said they had something for me and to see them after the game," Rasley said. "They took that picture, had it blown up and both autographed it and down at the bottom, it said, ‘Dave, thanks for being #OurGuy.’ I have it up on my wall and I look at it just about every day. That means more to me than pretty much anything I have."

Despite the 2020 season and a possible trip to Omaha for the College World Series being cut short, Rasley, who has never seen the Sun Devils play in the tournament, remains confident the baseball program will return to the setting where it has celebrated five national championships.