'Michael Crow has got to go': Students chant as they protest injustice at ASU

Hundreds gathered Sunday evening to protest ASU police, the lack of a Multicultural Center and for ASU to hire more faculty of color

The chants of hundreds of ASU students, alumni and other community members Sunday echoed those of millions of other protesters this summer fighting against systemic racism and oppression throughout the country.

The march began as protesters yelled, “Hands up, don’t shoot!” But as they approached the ASU Tempe campus, a cry much more unique to the students at ASU echoed the streets from Daley Park to Cady Mall: “Hey hey, ho ho, Michael Crow has got to go.”

“When Black students are under attack, what do we do? Stand up, fight back!” the chant continued, as protesters marched behind leaders of the Multicultural Solidarity Coalition.

Members of the community protested with the MSC, demanding a Multicultural Center at ASU and for ASU’s police department to be defunded. The protest also called for more equitable hiring practices for faculty of color.

The MSC, as a non-registered student organization, hosted the protest. Black Lives Matter Phoenix Metro also attended the march in solidarity, according to a statement posted on its Instagram.

The protest was originally organized by the Black African Coalition, Sun Devils United and the MSC. But the BAC was not involved in hosting the protest due to a statement from ASU President Michael Crow on Aug. 25 that said students who attend gatherings and do not follow social distancing could be subject to suspension.

The BAC was told the suspensions could be applied to members for the protest at the time. Joanne Vogel, the vice president of student services at ASU, later clarified in emails to BAC leadership that members could attend individually and not be subject to suspensions assuming they "conform to ASU’s conduct expectations."

“ASU is not ready for the kind of backlash they will receive,” Miriam A., a graduate student and member of the MSC, said. As a precaution, Miriam said the MSC had “attorneys on deck” if ASU were to suspend students. Miriam was granted partial anonymity because of fear of suspension and because she and other organizers have received threats.

Katie Paquet, a University spokesperson, said in an emailed statement the University will be "unveiling new initiatives to further support" ASU's Black students and faculty this week.

"We hear these students and understand their concerns," Paquet said. "ASU has always been committed to diversity and inclusion, but there is always more we can do. We must continue to evolve in this way."

After gathering at Daley Park, protesters marched to the ASU police department on the corner of College Avenue and Apache Boulevard in Tempe 30 minutes later.

In front of the station, Miriam explained this past summer, members from both the BAC and MSC met with University officials to discuss the possibility of a Multicultural Center, but talks have led nowhere, members said.

The talks fizzled when the University raised concerns that if it could find the money to build the centers on all four campuses, the addition of the multicultural centers may leave white students feeling excluded, BAC and MSC members said in interviews with The State Press.

But at the protest in front of the ASU PD headquarters, Miriam explained that the funding for the Multicultural Centers towered behind them.

“Take the money away from the police and put it in the programs that will actually help keep students on campus,” she said. 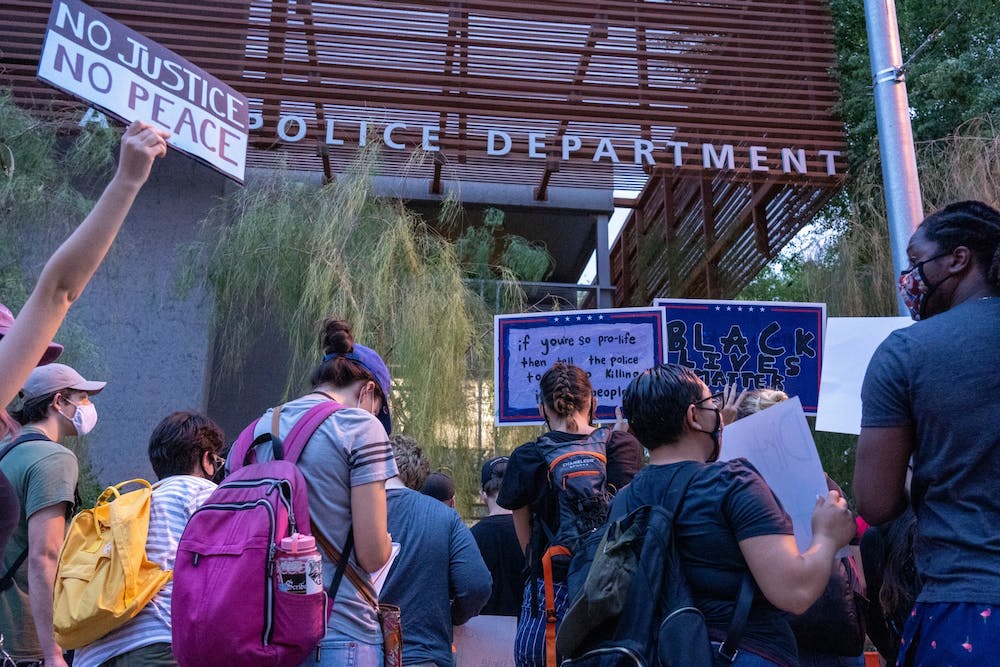 Protesters stand outside ASU PD on Aug. 30, 2020, to protest racial injustice on campus in Tempe.

For four years, Sarra T., who was also granted partial anonymity for fear of retribution, and other members of the MSC have worked to get support for the creation of a Multicultural Center on campus, she said.

Kim Beaudoin, a graduate student studying business administration and a transfer from New York, said they had “no idea the magnitude of this oppression on behalf of ASU” when they heard of the absence of a Multicultural Center.

Beaudoin, new to ASU and in the midst of their first few weeks at the University, said their previous undergraduate school was home to its own multicultural center for students to celebrate their diversity in a safe space.

“It transformed the people around me,” Beaudoin said. “Having to find a rental space for your club every single time because there is no centralized spot on campus for you to go — that is suppression.”

Beaudoin’s story was similar to Miriam’s and Sarra’s. The three said the community colleges and universities they previously attended as undergraduates had programs and centers available to help students of color. ASU, they explained, does not help at the same capacity, despite being one of the largest universities in the country.

“If ASU had resources for marginalized communities we wouldn’t have to be out here,” Sarra said. The protest was an escalation of months of talks and no actions, MSC leaders said.

From the police station, the protesters marched through the ASU campus until arriving at Cady Hall in front of the ASU Charter sign.

Standing in front of it, Miriam recited the words engraved on the sign: “ASU is a comprehensive public research university, measured not by whom we exclude, but rather by whom we include and how they succeed; advancing research and discovery of public value; and assuming fundamental responsibility for the economic, social, cultural and overall health of the communities it serves.”

The charter, despite saying that the University measures its success by whom it includes, “is bulls---,” Miriam said and the protesters chanted.

Multiple speakers spoke after, sharing their stories with the crowd — how they felt lost at the University as Black students without the resources needed to help them navigate through college; and that despite years of effort to create a more inclusive and equitable environment on campus, no action has been taken, they said. 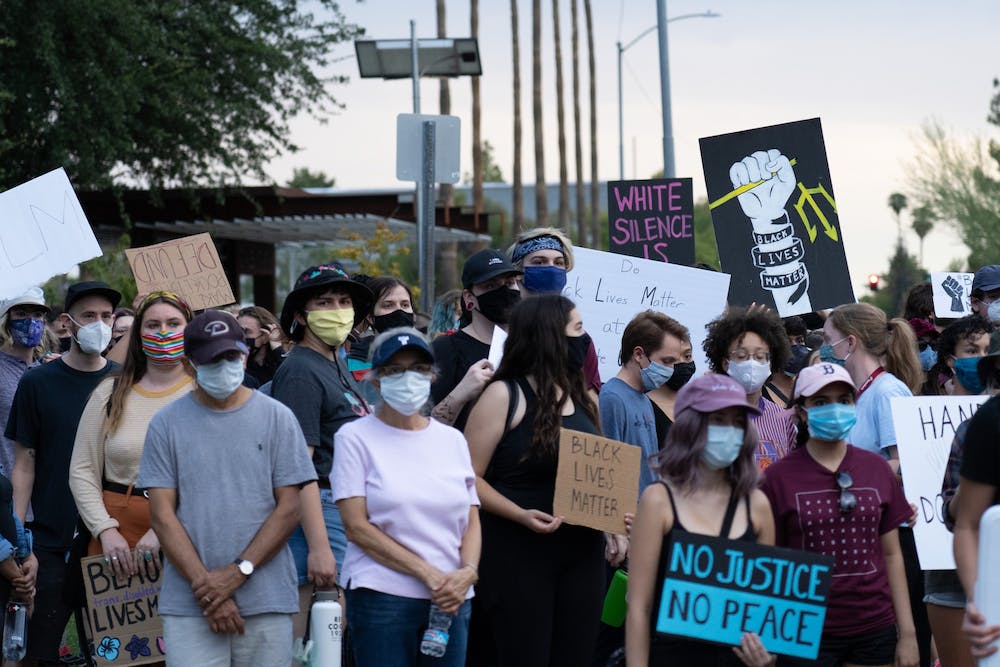 Protesters gather outside Daley Park in Tempe on Aug. 30, 2020, before marching to the ASU Tempe campus.

Leila Stewart, a freshman double majoring in women and gender studies and psychology, said that despite being on campus for only two weeks, she could see that ASU is part of the same “system of institutionalized oppression” as other institutions around the country. Afterward, she said that she is privileged to receive a higher education and to be at ASU.

“You will not shut us up, you will not bully us into a corner,” she said. “I know what my life is worth and you do not have the power to dictate that for me.”

In the end, Sarra said they needed those gathered together Sunday night to continue supporting them going forward. She said if they were suspended this week for the protest, they would need them out protesting again next Sunday.

As the speeches ended, and the protesters began to march back together to Daley Park, they left behind them a message for the University in black and red letters sketched on it.

“President Crow, do you hear us yet?” it said. “Stop silencing Black students.”