Lane College and ASU’s Luminosity Lab have partnered to help develop an adjacent property into a new portion of Lane's campus.

Lane College is a historically Black college located in Jackson, Tennessee with a total undergraduate enrollment of 1,267 students. The partnership aims to turn unused land into a bustling community hub.

ASU's Luminosity Lab is an interdisciplinary research lab that focuses on student-led research and development projects.

“I was hired by Lane College to lead a wave of innovation, so I mentioned to our president that I happened to attend the number one university for that in the country and suggested a visit to see what we could learn,” said Scholar in Residence at Lane College and ASU alumnus Greg Emery.

Lane College President Logan C. Hampton and Emery visited ASU’s campus. On their tour, they visited ASU's Luminosity Lab and the pair was especially interested in its projects.

“They had a chance to see what the students were working on and meet them, and it was pretty evident that at the start, they were so intrigued by this model,” said Mark Naufel, executive director of the lab.

Upon returning to Tennessee, Hampton and Emery began considering the development of commercial property next to the college.

The majority of Lane’s students live on campus, Emery said. However, the campus is located in an isolated, low-income area. Emery said it lacked places for food, entertainment, shopping and studying.

The land adjacent to Lane College was designated as an opportunity zone, a geographic area eligible for tax incentives for development. The college planned to turn the new land into a space students can use to pursue educational goals while creating work opportunities for on-campus jobs.

Their aim was to engage students from both schools with varying areas of specialty, and they approached ASU with a plan to model their development after the Luminosity Lab and make a positive impact on the community. 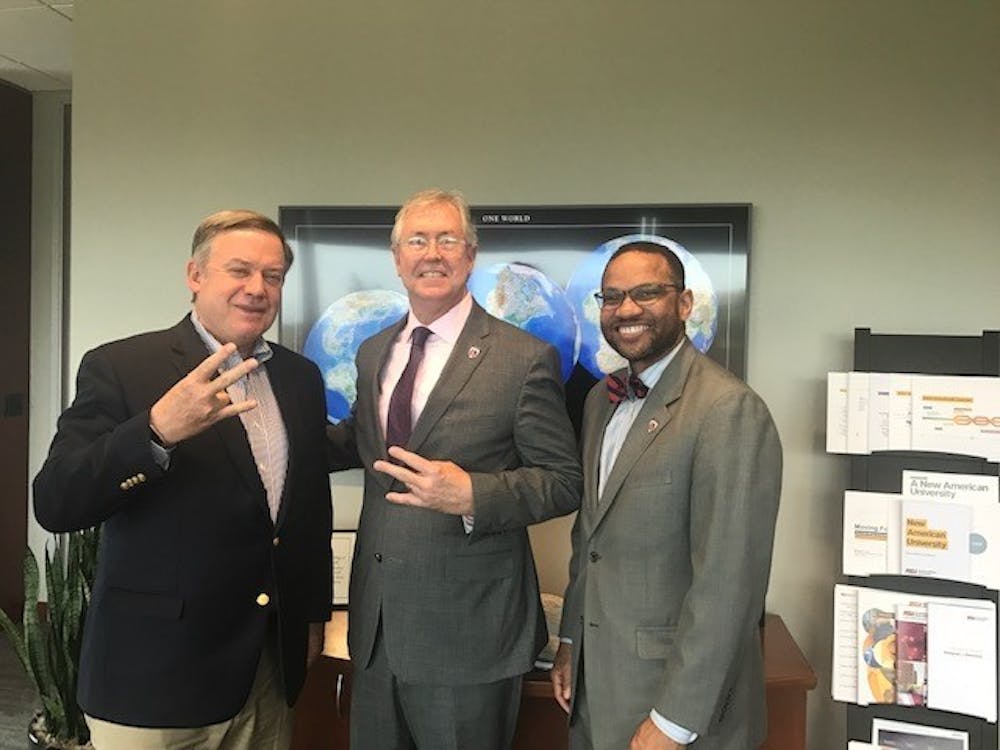 Arizona State University
From left to right: Michael Crow, Greg Emery, and Logan Hampton pose for a photo on Thursday, May 2, 2019.

The first phase of the project is to refurbish the existing structure and add a larger space that will include several dining options, entertainment and a meeting area. A third building will also be built and rented out for retail and other services like salons or health centers.

One of the principal features of the Luminosity Lab is its opportunity for student engagement  — students are encouraged to work independently on their ideas with little supervision. This project puts that ideology front and center.

“Giving our students a chance to collaborate with a world-class university is really important,” said Emery. “They’re always asking for opportunities outside of school and this is very hands-on and real, so it’s something that they can take advantage of.”

Ally Shott, an architecture studies major with the Herberger Institute for Design and the Arts, will act as project lead and is responsible for designing the buildings. Shott said she assumed massive responsibility but feels up to the challenge because it pertains to her interests.

“It was a great opportunity to do something I want to pursue in the future, which is to engage in communities that are underserved,” said Shott.

Six Lane College students were also recruited for the project as part of an entrepreneurship course. The group will meet with Shott once a week and give input to establish the school’s needs. Whatever the group believes is needed in their community and the surrounding neighborhoods will be implemented.

The student group will make a business plan that establishes all the property and business costs, predicts the revenue that could be generated, appeals to investors to receive financing and outlines the designs for the buildings.

Another significant goal of the development is fostering opportunity in Black education spaces and maintaining culture as a key aspect of the project.

"The students talked to Ally about what kind of African-American influenced art could be incorporated," said Emery. "It has given students at Lane the opportunity to take a step into the business or design world that they have not had the opportunity to navigate."

The partnership has given both schools a unique opportunity to give students chances for collaboration and responsibility.

“I thought it was the coolest thing,” said Naufel. “Providing those types of opportunities to students where they get that learning experience and the end-user gets this design that will substantially impact their campus is a beautiful thing.”

This is one of the Luminosity Lab’s first big partnerships with another academic institution, and its success has motivated the lab to try to further their reach.

“Because this has been such a positive outcome the lab is really working towards collaborating with other institutions not just in the United States but around the world,” said Naufel.