Extended Reality at ASU, or XR@ASU, released a simulation game testing players' COVID-19 precautionary decisions as they play the role of an ASU student attending Sync classes, going to the gym and completing other common tasks.

"COVID Campus Simulation," released in August, presents players with a series of questions while their character goes about their day in college.

Players are encouraged to choose the decision they would most likely make in real life and from those decisions, the player is given advice on what precautions to take and how likely they are to contract or spread the virus.

“The goal was for (players) to leave the experience understanding their ramifications for their choices, and that those could potentially infect other people,” said Mina Johnson, project lead and ASU psychology research professional.

Johnson said two years ago, she originally produced a simulation modeling the spread of the Ebola virus. In February, she shifted production from that project and began working to plan a COVID-19 game.

Johnson worked with a team of students and faculty over the summer to produce the game. With COVID-19 restrictions, much of the planning was done virtually through weekly Zoom meetings. 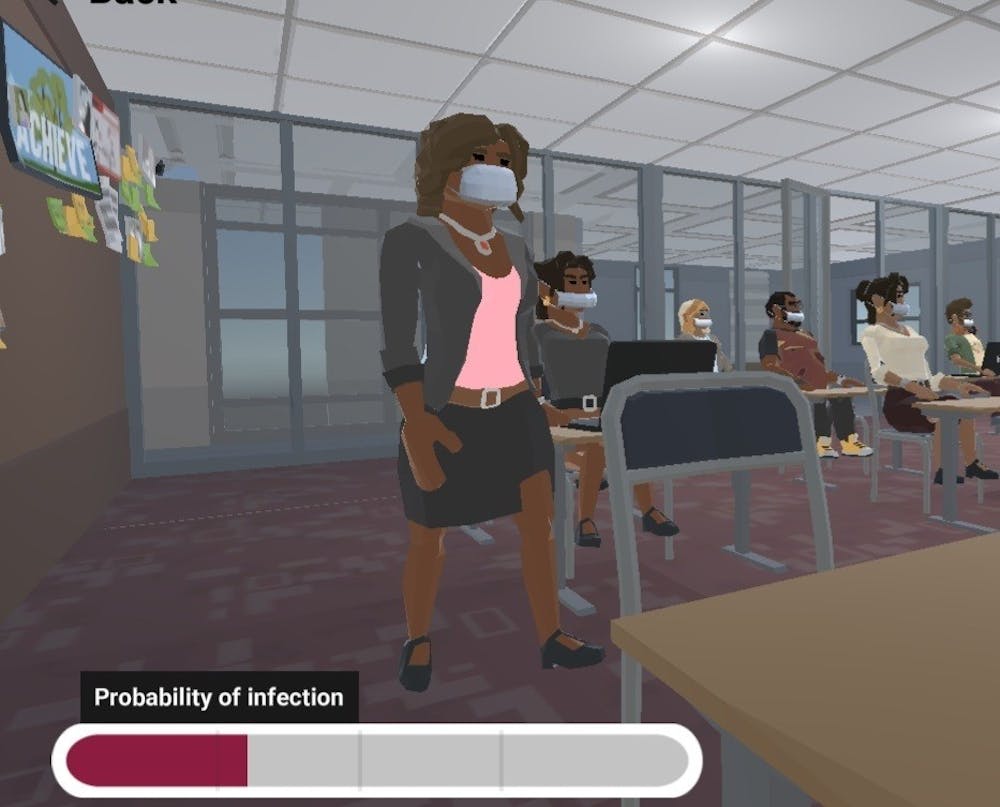 A scene from the XR@ASU’s "COVID Campus Situation" is pictured. The game shows how a COVID outbreak on campus can spread through a classroom.

Hannah Bartolomea, a senior studying psychology, worked with Johnson to design the user interface — buttons, startup page and storyline — of both the COVID-19 and Ebola simulations.

Jude Rayan, an ASU computer science alumnus, also worked with Johnson on production of the Ebola game and joined the team for the early stages of the COVID-19 game.

At the time, there was not much information on the virus, and the game originally focused on how quickly COVID-19 spread across people, Rayan said.

“We started with developing a simulation where people could understand how fast COVID spread and the importance of social distancing because, at one point, people were just staying indoors but didn’t quite understand what the purpose of it was,” Rayan said.

Now, the game focuses on players making responsible decisions to prevent further spread of the virus by making choices like wearing a mask, staying six feet away from people and gathering outdoors to avoid air recirculation. 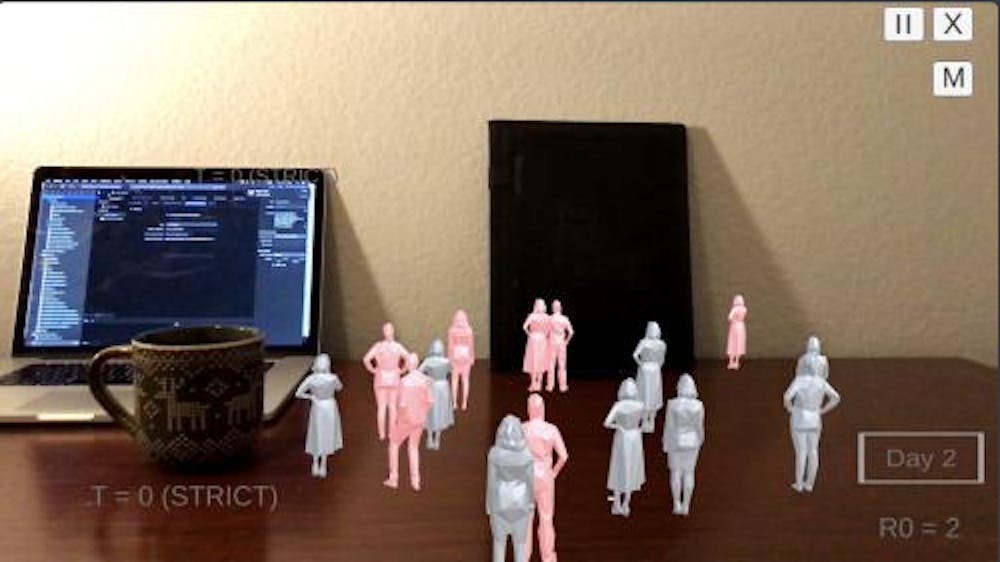 A scene from the XR@ASU’s "COVID Campus Situation" is pictured. The game shows how COVID-19 can spread.

Before and after the game, players are asked to complete an optional 15-question survey about their social distancing habits for a chance to win a $20 eGift card.

The data collected from the pre- and post-game surveys are used to assess players’ understanding of the information provided in the game. Johnson uses the information to determine whether or not the program was effective in educating players about COVID-19 precautions.

Based on data from 96 participants, Johnson said she saw a "statistically significant" difference in individuals’ confidence in taking precautions to prevent the spread of COVID-19 after they completed the simulation.

Johnson and her team plan to release an updated virtual reality version of the game in the spring using feedback from players who participated in the post-game survey and continue to educate players about the importance of taking precautionary measures to prevent the spread of COVID-19.

“Because I’m also a cognitive psychologist and I care about numbers, I wanted to see what was efficacious,” Johnson said. “Just because we made a game, that’s not enough for me. Does it do what I want it to do? Is it changing students’ cognition or behaviors?”

Kristen Apolline Castillo is the community and culture editor for The State Press. She has been working for the publication for two years, where she also reported for the desk.