The curious life of Benjamin Bartelle

And metal. And stilts. And prosthetic limbs. And that’s just counting materials outside the lab.

As an artist, he worked with anarchist art collectives, crafted violent art robots and choreographed fire dances. As a scientist, he dives headfirst into research deemed impossible or out of reach.

There’s an air of danger and uncertainty with any project Bartelle embarks on, even the most scientifically objective.

But he finds the failure fundamental to his work as both an artist and a scientist.

“That room for failure is the connection between these two things,” Bartelle said. “You have to accept all of these things and allow your ego to be just decimated every time you put yourself out there.”

Bartelle joined the School of Biological and Health Systems Engineering at ASU as an assistant professor of molecular resonance imaging in January 2020. And as he structures his lab, he brings with him a spirit of creativity and chaos. 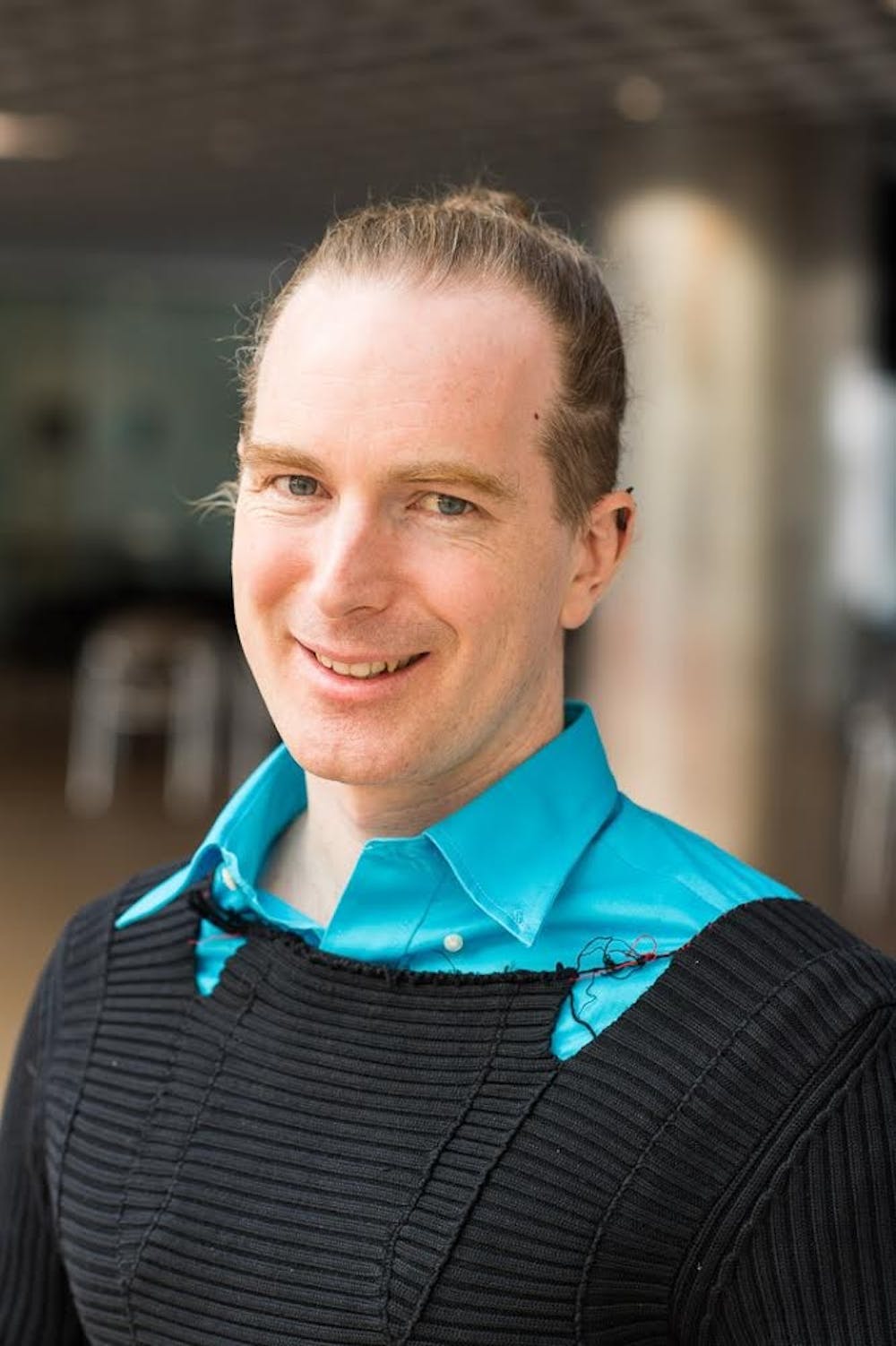 Benjamin Bartelle poses for a photo by Julie Pryor at MIT, photo obtained by State Press Magazine on April 26, 2020.

“I've been working on this for a long time and coming to ASU is now when I get to put a bunch of disparate pieces together,” Bartelle said.

The trio is starting the process of creating new technologies to image the entire brain, and drawing molecular information from whole-brain images.

They are currently working on developing the last components of custom hardware, software and wetware to run the lab remotely.

They started with reporter genes, or genes that measure gene expression, and specifically targeting nitric oxide, one of the most fundamental electrons signaling molecule inflammation.

“He does not expect his students to enter his lab with extensive experience and prior knowledge and instead puts forth quite a bit of effort himself to bring his students to the level of knowledge required for the project,” Eltze said.

He is guided by three principles: interaction, complexity and naiveté.

“Dr. Bartelle emphasizes it’s OK to be wrong, but we should always try,” Brodsky said.

Though some of Bartelle’s teaching philosophies came with time, many developed early in life — and an eccentric childhood.

The backdrop of his childhood paralleled the 1974 Jack Nicholson film “Chinatown.” At the height of the California water wars, the nearby town of Calabasas began to grow and real estate developments slowly started to overtake his hometown.

But before the neo-noir real estate drama, Bartelle grew up on what he calls a “boy ranch” in Topanga Canyon, California. Though not an active farm, the property sat catty-corner to a hippie commune and a shantytown of strawberry field workers.

As he grew up, more and more people fled their ranches amid real estate deals, and left animals deemed “useless.”

“I think it was six or seven stitches,” he said.

On the way to the emergency room, his father asked Bartelle to think about how the rooster might be feeling.

“When you get to interact with animals and you see them in the rawest state, you get to wonder why that is,” Bartelle said. “You get to ask questions that you don't get to if you don't live in a kind of weird accidental natural environment.”

Bartelle believes living on the ranch shaped his thinking and piqued his curiosity. It also led to a flood destroying his childhood home, twice.

“You're at the mercy of nature in this space and it does nice things for you but it also kind of ruins your life on occasion.”

By the time he reached high school, he had been diagnosed with ADHD and dyslexia, making math especially difficult. But he found solace in gymnastics, a sport Bartelle stuck with until he got too tall for the bar and his feet skimmed the floor at a competition.

Bartelle then transitioned to kung fu. He found himself fascinated by the movements and not necessarily because he wanted to “kick-ass.”

His childhood was also speckled with funny little instances. One of his high school girlfriends lived in the same neighborhood as Ice Cube, Eazy E and Ice T. One of his childhood friends was an heir to the Baywatch fortune.

After he graduated high school, he attended the University of Santa Cruz. Bartelle embarked on his undergraduate education having to choose between theatre, arts and biochemistry.

He eventually committed to biochemistry but took as many dance classes as humanly possible.

On top of near-constant dance rehearsals, Bartelle worked in a chemistry stockroom and as an artist, assistant and figure model for the sculpture department.

After he graduated, Bartelle moved to San Francisco. He worked as a chemist at a small startup and interned at Survival Research Laboratories, a machine performance art group.

“We built death machines out of Cadillacs,” he said.

Other projects created by the group include the Flame Hurricane, a pulse jet engine that creates a spiral of fire, Hand O' God, a giant spring-loaded hand with bone-crushing powers, and the Mumbly Peg Stabber, a robot programmed to stab.

Bartelle first learned the trials and tribulations of epic, artistic failure at SRL. The founder of SRL, Mark Pauline, lost most of his hand in an incident with a rocket motor.

Part of initiation at SRL is shaking Pauline’s hand, a symbol of artistic risk.

“All he has is a piece of the flesh off his back grafted onto one of his toes. And that's his hands because a piece of art literally blew up,” Bartelle said. “He's missing his goddamn hand. It's gone.”

After a short stint in San Francisco, Bartelle moved to New York to pursue art.

He settled in Brooklyn and got a job working on plant genomics, the study of plant genetics, at Cold Spring Harbor Research Laboratories. He’d take the A train to Long Island and walk down a country road to get to work.

Most days, he’d attend company-sanctioned lectures followed by copious wine and cheese mixers. Bartelle stretched the types of lectures he attended, wandering out of plants and into neuroscience.

On his days off, Bartelle moonlighted with the Madagascar Institute, a machine-based performance art collective. He taught and performed low-flying trapeze and took kung fu with the Wu-Tang Clan.

He eventually started his own circus company, 1337, and choreographed fire dances for Burning Man.

Around the same time, Bartelle met with Leslie Vosshall, a coworker of a coworker, who referred him to a new neuroscience startup, Sentigen.

“I definitely got the job because I was cute,” he said. “There's no question like, really in retrospect. I think they picked me over someone else who was a lot more qualified but a lot less cute.”

Sentigen worked with g-coupled protein receptors, a protein in the brain that transmits signals.

At the time, very few people were working with MRI as a research tool. Turnbull showed Bartelle how he utilized MRI in observing the brain activity of mice, while still keeping them alive and well. MRI allowed them to view the entire brain.

He and Turnbull started to work together where Bartelle started exploring possibilities with MRI and neuroscience. Though in his first research pursuits in protein engineering and synthetic biology, some reviewers rejected MRI solely because of its lack of color.

“It’s like the goth cousin of microscopy,” he said.

“It's not entrancing to people and so it has to stand on its own merits,” he said. “Survival Research Laboratories was ugly art, Madagascar Institute was ugly art, but it had to carry meaning.”

Around the same time, Bartelle was literally experimenting in the lab as well as outside of it with his art — a process he claims to be visceral.

Each brought its own challenges. The neuroscience community had yet to warm up to MRI as a prevalent research tool, and working with dancers and artists often had little to no payoff.

Bartelle also found he needed to start his post doc where he applied his theories with synthetic biology to living organisms. And that’s when he met Alan Jasanoff.

Jasanoff, Professor of Biological Engineering, Brain and Cognitive Sciences, Nuclear Science and Engineering at Massachusetts Institute of Technology, attended one of Bartelle’s talks. The two hit it off almost immediately.

“I feel like you're the only other person in the world who cares about this stuff,” Jasanoff first said to Bartelle.

The lab focused on neurotransmitters, chemical messengers of the brain. Bartelle worked with colleagues in the lab as he whittled down his Ph.D.

In talking with Jasanoff over Zoom, he showed me an art piece Bartelle made for him as a going-away gift. He had engraved a piece of wood with engrams, renaissance drawings of the nervous system.

With a smile, he held the camera up.

“I actually love having people in my lab who were artists or literary-minded,” Jasanoff said. “Ben was a really quintessential example of that. Someone who was good with his hands, not only at the bench but on a different type of workbench.”

His colleague, Aviad Hai, also described the effect Bartelle’s creativity had on the lab.

“It was a really philosophical cross-fertilization where we kind of understood each other as just two people that are different,” Hai said. “He’s clearly a very special person in terms of sensibility, in terms of his understanding of science and the way he does science.”

Bartelle finished his time at MIT with a Ph.D. in molecular biophysics in 2019. He started at ASU in January 2020.

As he works at ASU and continues to merge art and science, he reflects on his work in both fields.

“There is an ongoing question. There is this entire other sort of intuitive aspect of science that I feel can be celebrated and explored. There's also the capacity of art to help us understand the natural world, and the experiential aspects of neuroscience.”

People, including myself, ask Bartelle how he plans to merge art and science, and for now, he knows one thing for sure.

“It's actually a really hard question.”

Editor’s note: An earlier version of this article misspelled Leslie Vosshall’s name and the name of Sentigen. It has since been updated to reflect these changes.