A team from ASU is assisting the city of Phoenix to implement and test new "cool pavement" in local neighborhoods.

Earlier this year, Phoenix began their Cool Pavement Program after observing a similar project in Los Angeles. The goal was to reduce the urban “heat island effect” by putting a coating on the asphalt roads within Phoenix's residential areas.

This year, Phoenix experienced the hottest summer on record.

“The city of Phoenix Street Transportation Department is always looking at ways to innovate, do things better and ultimately make Phoenix a more livable city,” said Heather Murphy, communications and public engagement coordinator for the city of Phoenix.

Murphy said the city began working on their own roads, and brought in help from ASU, after seeing Los Angeles' success.

A water-based treatment is applied to areas of asphalt that were already scheduled for maintenance. The new coating is placed on top of existing asphalt and the two materials bond to "create a new surface," Murphy said.

“The renewed surface looks and performs like any other kind of seal coat,” Murphy said. “But the difference with cool pavement is that it is lighter in color, it still has a matte finish, it is nonreflective and it doesn't produce glare.”

The city recruited an ASU team to measure whether the same effects of the Los Angeles program could be achieved here. The team — led by Ariane Middel, an assistant professor with the School of Arts, Media and Engineering, and Jennifer Vanos, an assistant professor with the Sustainability Scientists and Scholars — conducts a series of tests that measures the air, surface and radiant temperatures of the pavement, as well as durability and public perception.

Two methods were used to measure surface temperature: sensors on the car to measure air temperature, and a student on the team rode in a helicopter to take thermal photos of the area. 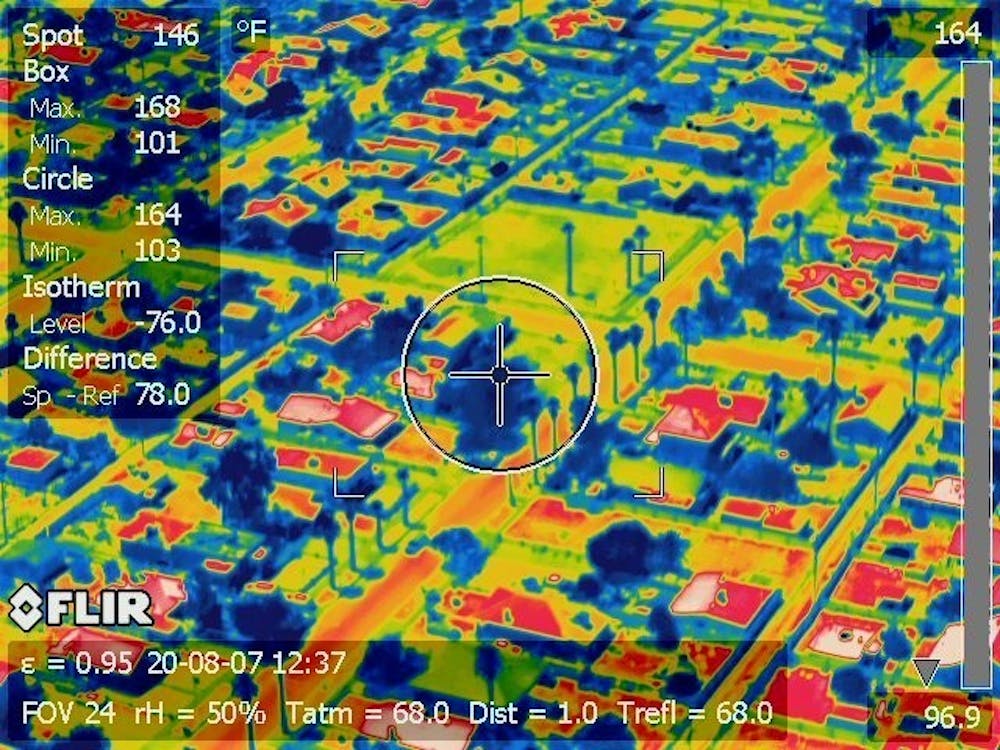 An arial photo of one of the neighborhoods that was tested taken by a thermal camera in Phoenix, Arizona.

Middel said although all nine of the sites have completed the application of the new pavement, the team spent time testing at only three of the neighborhoods from 4:00 A.M. to sunset to get the accurate data.

Nancy Selover, the state climatologist for Arizona, said it was only necessary for the team to measure at the three neighborhoods because of how the sun hits the surface and heats the air. During this time the solar radiation is being absorbed by the surface, which includes streets, pavements and concretes. This produces the opportune time for testing.

“I would expect that if you monitored (the pavement) all night long, the heat island effect significantly reduced,” Selover said.

According to Middel, the team is currently in the process of “crunching numbers." Middel and Murphy said the testing should be finished around a year from now. This gives them time to make sure the data is accurate and conduct additional research regarding the pavement's long term effectiveness.

According to Middel, preliminary results are showing a cooling effect and residents the team has spoken to said they feel cooler temperatures as well.

“We want to have a full, complete picture before we put everything together and distribute the results,” Middel said.