Music students can choose up to 10 guests to watch them perform in person, while others can watch online

The Herberger Institute for Design and the Arts adjusted its activities to a mostly online setting, including live student recitals at the Katzin Concert Hall in light of ASU’s COVID-19 restrictions.

Though the recitals are no longer open to the public, each student performing in a group is allowed up to 10 close friends or family members and their major professor to come in-person to watch. Students also have the option to livestream their performances online for others to tune in virtually.

The live performances scheduled throughout the semester are a graduation requirement for undergraduate, graduate and doctoral music students. Depending on the preparedness of the students and their physical health, performances are subject to cancellation.

The school of music worked with the ASU administration to ensure students would be able to complete their graduation requirements, School of Music, Dance and Theatre director Heather Landes said.

“I know that our students are really frustrated by not being able to (perform) as they have in the past,” Landes said. “Trying to figure out ways to make it safe and to be able to help students engage has been my drive over the summer — to make sure that our students could complete their degree requirements and get their performances in, but do it in a safe way.”

Normally, students may perform in groups of three to five. This year, performances are restricted to only two or three other performers and must spread out on stage at least six feet apart from each other. 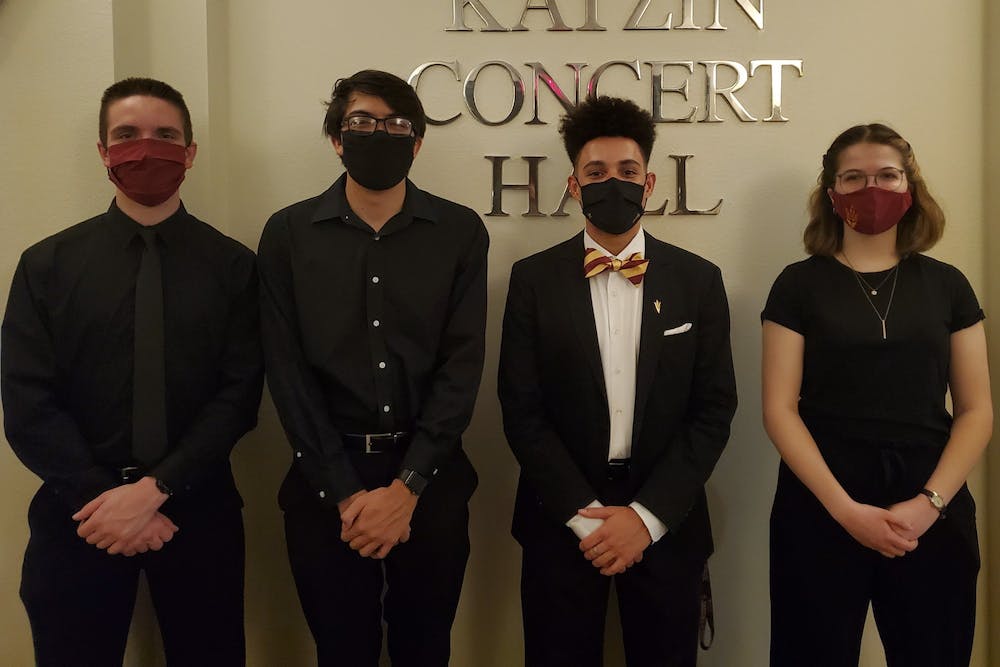 Students must wear proper personal protective equipment. For example, pianists and string instrument players must wear a mask throughout their performance. However, brass or woodwind players and vocalists are allowed to perform without a mask.

Jalen Montgomery, a senior studying music learning and teaching, performed a piece on the bassoon in a group with three other students to fulfill his one recital requirement as an undergraduate student on Nov. 6.

"I thought that the smaller audience was fine," Montgomery said. "I had a lot of good friends and family come down so it was good for me and I know plenty of people watched the livestream online ... That was really nice just to be have it be accessible to other people from their homes and in the comfort of their own spaces."

Preparing for her performance in a remote setting was "disappointing," because she planned to learn the music with an Argentinian teacher in Buenos Aires, Murphy said.

"We had already planned a concert that we were going to (perform) together there so it was just disappointing seeing all that fall apart," Murphy said. "But, of course, that's COVID and that's 2020."

Despite her original plans being canceled, Murphy worked closely with her voice professor and pianist, Stephanie Weiss, to prepare for this recital as best as she could without the guidance of an Argentinian performer.

Despite preparation and learning being "isolating," Murphy said her live performance for her small audience was "exciting and freeing."

"I get a lot of joy in music and sharing it with other people," Murphy said. "This music is hardly ever performed up here so the audience had not heard these songs before. It was so exciting to perform and to get to share this music that I'm so excited to expose everyone to."

Correction: A previous version of this article incorrectly stated Heather Landes' title. The article has been updated to reflect the change.

Kristen Apolline Castillo is the community and culture editor for The State Press. She has been working for the publication for two years, where she also reported for the desk.