Insight: The LEGO games are the best video game franchise

For 15 years, the series has adapted multiple beloved films and made each of them better

The first LEGO Star Wars video game was released in 2005 and began an empire of games that ruled over an entire generation’s collective childhoods. Since then, the LEGO games have expanded beyond aliens and spaceships, adapting other big series like Harry Potter, Indiana Jones and the DC and Marvel universes.

While each game tells a different plot, each one feels familiar at its core: puzzle solving and beating up bad guys as your favorite characters.

Each game has its own added flair. With Harry Potter, the gameplay revolves around your magic spells that help you solve puzzles. While in the Star Wars games, you can use the force against enemies as well as puzzles. Some focus on each character’s particular skills, like in Indiana Jones and especially in the DC and Marvel games.

My LEGO journey began with LEGO Star Wars: The Complete Saga on the Playstation 2, the ultimate version of the Star Wars series, which includes the original and prequel series all in one game.

I played with my younger siblings, mainly my younger brother, as we tried to make our way through the levels without getting too distracted fighting each other or playing with something silly in the game.

Our favorite moments in each level were the hidden spots that have nothing to do with the larger story but include a gimmick you can't find anywhere else. One such spot, for example, is on the Death Star in one of the “A New Hope” levels where the players can find a stormtrooper recreation room with two hot tubs.

Inside were off-duty enemies in bathing suits who you can launch out into space with a button on the other side of a window. We would spend an excessive amount of time sending these poor soldiers into space and laugh as they spun past the screen.

Another iconic feature of the games is the number of characters you can play as, like the main crew of heroes, the villains and even the most obscure side characters.

Some of those side characters may only appear a handful of times on the silver screen. However, in LEGO form, they have achieved fame, such as the GNK power droid, lovingly referred to as Gonk. Gonk is an objectively useless character, unable to run, jump, attack or do much of anything at all. But it walks funny, waddling like a duck, which made it perfect for me.

A similar character to Gonk is the mouse droid, a small droid on wheels you can race around the levels with. It is just as useful as Gonk, but moves quickly and you can squeak to get the attention of enemies.

Playing as either the Gonk droid or the mouse droid allows you to explore most of the level without ever fighting, as the enemies don't attack you. My brother and I would just race each other as mice throughout the Death Star, completely ignoring whatever heroic activities we were meant to do.

The games allow for the same amount of goofy fun outside of the levels, in what was just a glorified menu, also called a “hub world” in many games, an area that allows you to change settings, unlock characters and select what level to play.

In LEGO Star Wars, this is the Mos Eisley Cantina from “A New Hope” and is populated by all the characters you have unlocked to that point. The cantina honors its film counterpart by being a single punch away from an all-out brawl at all times. It also allows the players to take down three different versions of Han Solo for no reason besides the fact it’s fun. 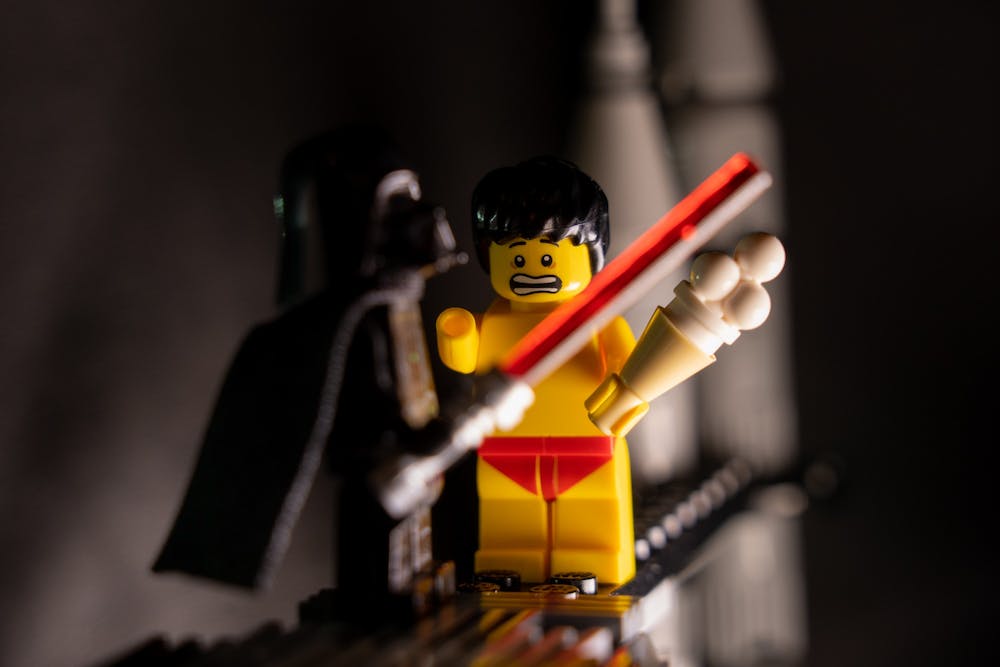 Some of the other games in the series, like Indiana Jones and Harry Potter, have a similar hub world, such as the college Jones taught in and Diagon Alley for the Potter games. Later games, like LEGO Marvel Super Heroes, opens up an entire LEGO New York City for players to explore between levels as their favorite heroes, causing trouble and fighting enemies as they please.

The games, and the character profiles in particular, even went viral at the very beginning of the year, with many TikTok users changing their own profile pictures to LEGO Star Wars characters, even Gonk. It was a reaction to a handful of famous users receiving all of the attention media outlets gave the app, a sort of rebellion against the ultra-powerful Hype House.

The LEGO games are an important bridge between the joys of childhood and the struggles of adulthood. Replaying the games is not just a nice nostalgia trip, it's a truly enjoyable experience.

“The LEGO Movie” portrayed the same idea, specifically honoring the stories kids made with their LEGO pieces and figures and the stop-motion fan films the creators emulated in the film’s animation style.

It brings you back to the experience of playing with your LEGO sets and your tub of random pieces, and the game recreates both play styles.

For both players of the game is a tangible version of the stories they made in their imagination with the serious and the goofy all mixed together in the best gaming experience available.