An ASU campus club is helping lead the charge for a complete revote in Arizona, citing baseless claims of statewide voter fraud during the 2020 general election.

College Republicans United, a conservative political club known for making racist and anti-Semitic comments in the past, said in a tweet that because they believe the theories of fraud, "the American people will not accept the results no matter the outcome," and as a result, "we must redo the elections."

The U.S. Department of Homeland Security released a statement Thursday that said "there is no evidence that any voting system deleted or lost votes, changed votes, or was in any way compromised."

"The November 3rd election was the most secure in American history," the statement said. "Right now, across the country, election officials are reviewing and double checking the entire election process prior to finalizing the result.”

Aaliyah Smith, a member of CRU and Turning Point USA and a freshman studying political science and philosophy, said she will be protesting at the Maricopa County Tabulation and Election Center with the club, advocating for a full redo election.

"It's about knowing that our ballots were counted fairly and there wasn't any fraud," Smith said. "If everything goes through, and (former Vice President Joe) Biden still wins, we'll eventually accept that."

In an interview with Fox Business on Wednesday, Arizona Attorney General Mark Brnovich said in terms of the presidential election "it does appear that Joe Biden will win Arizona."

The Associated Press was one of the first outlets to call Arizona and its 11 electoral votes for Biden, while most outlets waited until this week to call the state as Biden's lead narrowed.

No U.S. state or county has ever redone a presidential election. This would render all early voting and Election Day ballots invalid, and voters would cast their ballots again on a new election day.

Smith said she voted in person on Election Day and claims, without providing evidence, her ballot was since marked "canceled" on the Maricopa County Voter Dashboard.

Arizona Secretary of State Katie Hobbs tweeted ballot status information is only available for early and provisional ballots and "there is no status look-up for regular Election Day ballots because they are all counted."

For people who received an early ballot but voted in person, Hobbs said on Twitter their ballot status on the Voter Dashboard will appear as "canceled." This means the person's early ballot was canceled, and instead, their ballot cast in person is counted.

My office has been putting out information for months about how election processes work in the state & all we do to ensure security & fairness. If you haven't been paying attention, that's on you, but don't show up when you don't like the result & scream fraud w/no evidence.

Smith also claimed when she voted for President Donald Trump, the Sharpie she used bled through and marked Maricopa County Recorder Adrian Fontes.

However, the selections for both the presidential race and the Maricopa County Recorder race were on the same side of the Maricopa County ballots, and an inquiry from Brnovich concluded "the use of Sharpie markers did not result in disenfranchisement for Arizona voters."

In a video released by the Maricopa County Elections Department Oct. 24, it advocated for Sharpie use on ballots and that bleed-throughs are not an issue.

Despite this, Kelly Townsend (R-Mesa), a current Arizona state representative and senator-elect, called on voters via Twitter to sign an affidavit regarding the "forced use" of Sharpies.

CRU posted on Twitter that the club is helping collect affidavits "for our President" in the lawsuit Trump's campaign, the Republican National Committee and the Arizona Republican Party filed.

The lawsuit claims "up to thousands" of voters in Maricopa County "had their ballots rejected by the tabulation device," and these ballots would have contributed "up to thousands of additional votes for President Trump and other Republican candidates."

Brnovich said in the Fox Business interview that his office determined "bleed-throughs" and people using Sharpies "did not affect anyone's votes."

In terms of the lawsuit, Brnovich said "we are literally talking about less than 200 votes that are in question," and even if all of those votes turn out to be in Trump's favor he does not "believe it will make a difference."

READ MORE: Lawsuits and Sharpies: The Republican response to the election 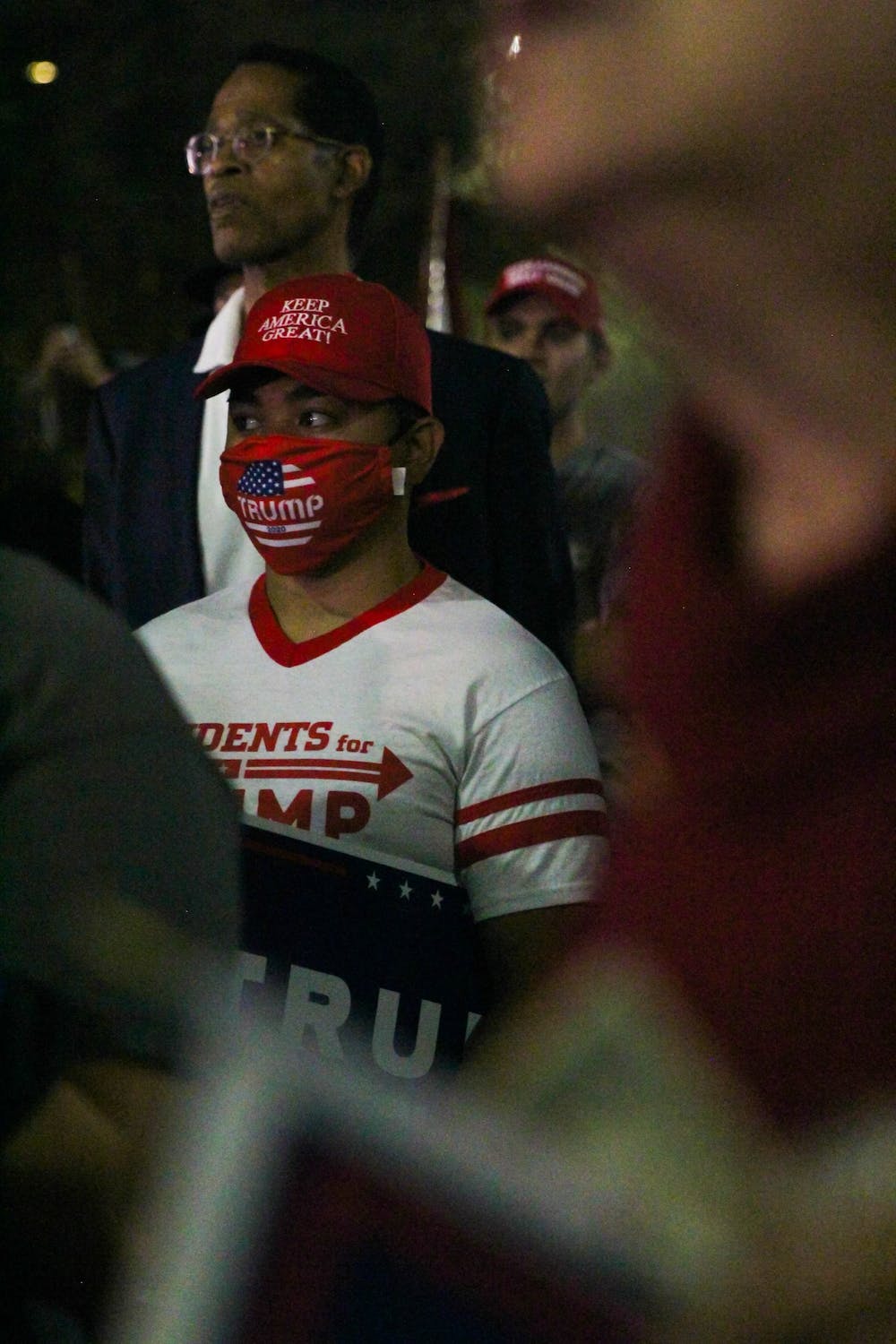 A protester wearing a Students for Trump shirt stands outside the Maricopa County Elections Department office in Phoenix on Tuesday, Nov. 4, 2020.

However, not all Arizona Republicans agree with CRU's push for a revote, or even with the current protests questioning election results.

Beginning on Nov. 4, Trump-supporting protesters have gathered around Phoenix to demand votes be counted, including outside the Maricopa County Tabulation and Election Center despite votes being counted inside.

Maricopa County Recorder-elect Stephen Richer said in an email that he doesn't think "protesting at MCTEC is a productive activity," and that the protests "might have the unintended effect of slowing the counting."

Judah Waxelbaum, chair for the Arizona Federation of College Republicans and Western regional vice chair for the CRNC, said in an email that "Arizona has no legal avenues for a 're-vote' and only allows for a recount when a vote is within a certain margin."

In order to trigger an automatic recount in Arizona for the 2020 presidential election, there must be 200 or fewer votes separating candidates.

Over 3.3 million votes have been counted between Biden and Trump in Arizona, with over 11,000 votes separating the candidates as of Nov. 12.