Jupiter and Saturn aligned with Earth to form the 'Great Conjunction'

For the first time since 1623, Jupiter and Saturn's alignment created the "Christmas Star," and ASU's scientists livestreamed a telescopic view of it

An end-of-the-year treat for the naked-eye is something everyone needs to finish 2020.

Planets Jupiter and Saturn aligned with Earth forming the Great Conjunction Monday evening for the first time in hundreds of years.

This planetary alignment occurs every 20 years, but was last visible in the sky in 1623. What makes this sighting so rare is how close the two planets are coming together.

ASU's School of Earth and Space Exploration livestreamed the event to over 700 watchers across the globe Monday evening, where scientists within SESE shared shots of their telescopes and explained the science behind this conjunction's significance.

"It's like two race cars on a track, and one passes the other," said Robert Alling, manager of SESE's community outreach program.

Just past sunset once the sky darkened, everyone around the world — with a clear sky and a southwest view — was able to witness Jupiter on the inside lane, approaching Saturn and finally overtaking it for nearly an hour. 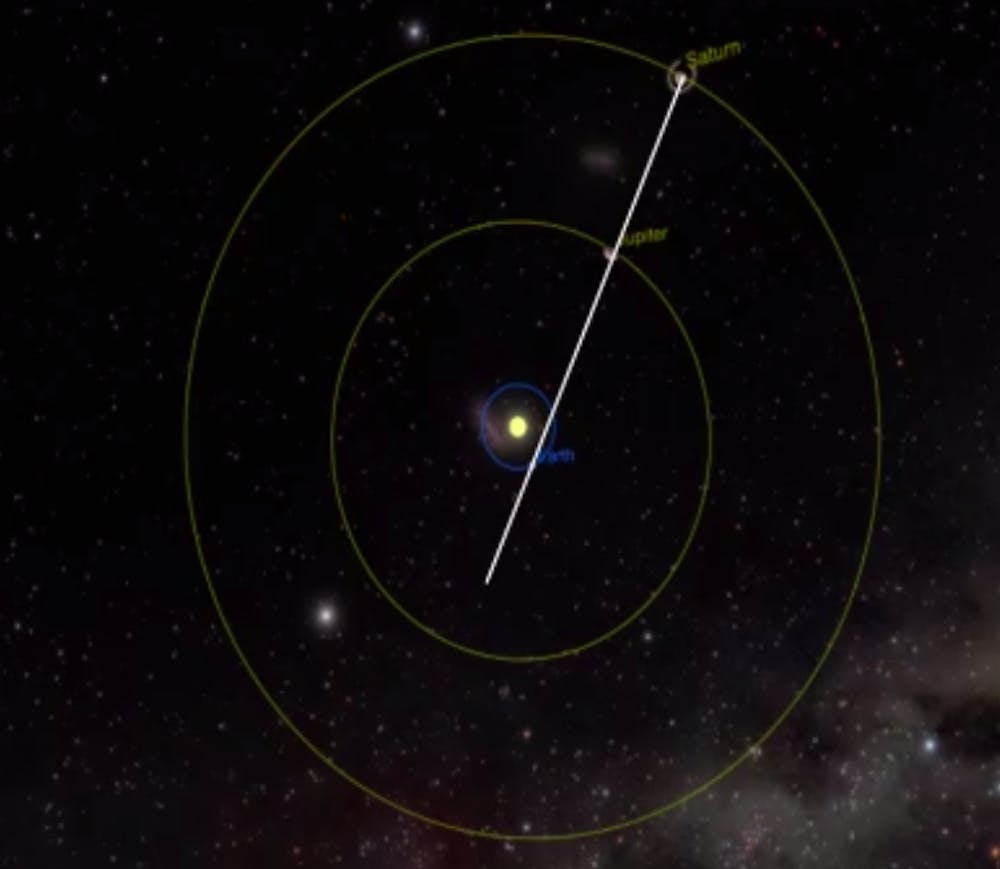 A simulation made by the School of Earth and Space Exploration shows the point in orbit when Saturn, Jupiter and the Earth are in line and visible from Earth. Screenshot taken from Dec. 21, 2020, livestream held by SESE.

Alling said tonight is special as Jupiter and Saturn are meeting at the same "ecliptic longitude," which is what makes two planets appear join together from Earth.

"They happen to be at parts of the orbit of what we call the meeting node, that means they are passing through the plane of the solar system," Alling said. "So they're in line for us together and they are very, very close together."

NASA explained in a post on their website that though the planets will appear to have merged, they will remain hundreds of millions of miles apart in space.

While the the Great Conjunction is viewable to the naked eye, 2020's planet alignment marks the first viewing with modern telescopes.

"I think this is a good time for us to kind of just take a step back and really enjoy and appreciate how wonderful the universe is," said Claude Haynes, observatory manager of the East Valley Astronomers club during the livestream. "We can do it with our own naked eye, just like humans have done for thousands and thousands of years.

“It’s a pretty spectacular universe, and we should celebrate that as often as we can."