Active COVID-19 cases continue to rise within the ASU community despite the fall semester ending nearly two weeks ago, with off-campus students making up the majority of cases.

ASU reported a total of 433 active coronavirus cases within its community, an increase of 11 cases since Monday, according to an update Thursday.

There are 328 active cases among students off campus in the metropolitan Phoenix area, and 13 students are isolating on the Tempe campus. A total of two active student cases are on the Downtown Phoenix, West or Polytechnic campuses.

The ASU community's percent positivity rate is roughly 2.3%, using the cumulative number of positive results as the numerator and the total number of tests collected as the denominator.

The first shipment of COVID-19 vaccines arrived in Arizona on Monday, and healthcare workers and first responders received some of the first shots in the state on Wednesday. Maricopa County announced earlier this month a three-phase distribution plan that prioritizes vaccinating health care workers, educators, long-term care facility residents and vulnerable populations. 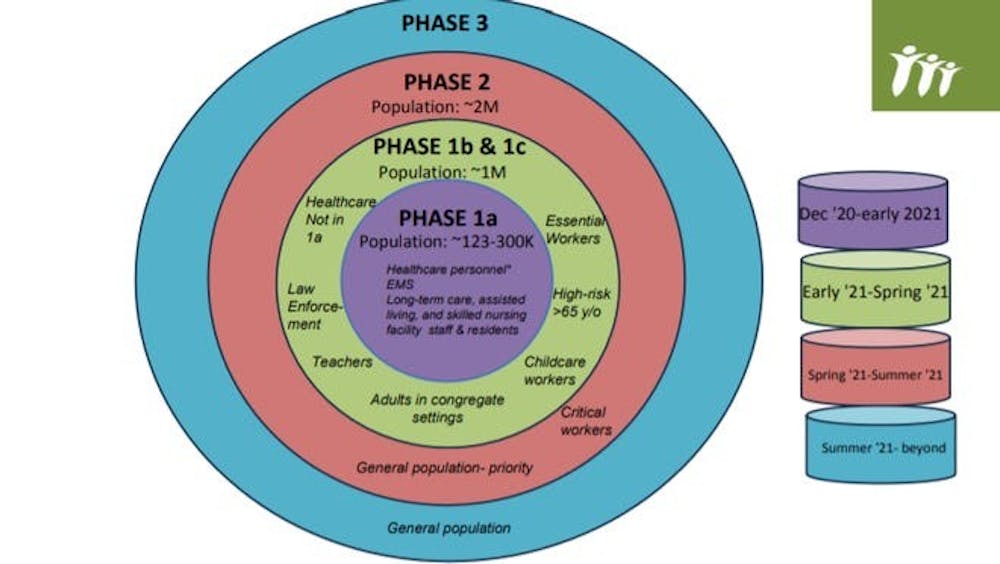 Arizona's Rt number, which expresses the rate of infection, is at 1.15 as of Thursday, currently the third-highest mark of any state in the nation.

Joshua LaBaer, executive director of ASU's Biodesign Institute, said in a press call Wednesday that Arizona is a hot spot in the country, "if not the top hotspot per capita spread of the virus."

LaBaer and the Biodesign modeling team predict the state will reach a peak in late January to early February, despite the record-breaking number of cases Arizona has seen the past few weeks.

The Arizona Department of Health Services reported 5,817 new COVID-19 cases and 147 new deaths Thursday, continuing a stretch of over 1,000 new cases reported each day of December thus far. Intensive Care Unit bed capacity was at 91% as of Wednesday, with COVID-19 patients occupying 51% of those beds.

Arizona's Rt number, which expresses the rate of infection, is at 1.15 as of Thursday, currently the third-highest mark of any state in the nation.

Editor Ellie Borst contributed to the reporting of this article.