Shannon McBreen knew she wanted to pursue a career in STEM after visiting ASU's Polytechnic campus with her Girl Scout troop seven years ago.

Back then, McBreen, now a fourth-year electrical systems major, had no idea a Rube Goldberg project would lead her right back to campus — this time as a student.

But the reality on campus was not one she expected. The Polytechnic School, located in Mesa, is home to science, technology, engineering and math-based academic programs. She would be one of two women in a class of 100, facing microaggressions based on her gender and a "constant" struggle with imposter syndrome due to long-held archetypes of successful engineers as only white men.

"It's just a tough balance, and I think it's something that all of us have to deal with at one point or another in our STEM careers," McBreen said. "I feel like a girl can have every positive quality in the world, and she's still going to get talked down to at some point — and that's really frustrating."

Data reported by the National Center for Education Statistics found at the Polytechnic campus, around 67% of undergraduates are male, while around 33% are female. This disparity is reflective of the state of STEM education across the country, with 64% of bachelor's degrees in STEM fields awarded to men and 36% awarded to women, according to NCES.

This disproportionality was one of the driving forces behind the establishment of the Research for Inclusive STEM Education Center, or RISE, at ASU.

Sara Brownell, a neuroscientist and associate professor at the School of Life Sciences, said she founded RISE to close representation gaps across the STEM field at ASU.

"STEM is often a space where people assume that it's objective and it doesn't matter what people's identities are who are doing the research, but that's absolutely not true," Brownell said. "Those identities matter."

Although housed in Tempe, RISE aims to reach community members across all campuses.

"I identify as a member of the LGBTQ community, and I do scholarship on LGBTQ students. And that completely originates from my identity," Brownell said. "The types of questions we choose to explore, research methodologies that we use and even how we interpret the data — it's all influenced by our own perspective and our own biases."

Looking beyond the numbers

Brownell, who co-authored a study on gender disparities in STEM, said she found inequalities often lie beneath the statistics, and those in the field need to be aware of their role in reversing the narrative about women in STEM.

"We can look at numbers, but often numbers can hide how bad some of these inequities actually are," Brownell said.

"Even if people in positions of power are allies and are strong proponents of diversity and inclusion, if they hold identities that are privileged, it's hard for them to truly understand what it's like to be a woman going through an engineering program and being one of only two women in a class of 100 people," she said.

Rose Hercel, a sophomore studying information technology, said she is no stranger to this disparity.

While her general education courses tend to be more balanced, Hercel said, classes geared toward her major are nearly always male-dominated.

Being the only women in a group project is a common occurrence, she said, recalling discouraging moments when her input was dismissed, challenged or ignored altogether.

"I've had a lot of groups where it's just been guys and me," Hercel said. "I always just feel like I'm kind of overlooked."

This disregard, Hercel said, often shows itself in quiet gestures like her male group members talking exclusively to the other men in the group, or every suggestion followed with doubtful comments.

"I have to engage or else I feel like they won't engage me," Hercel said. "And I just think it kind of sucks. Like, why do I have to put in so much effort when they can't even bother to engage me?" 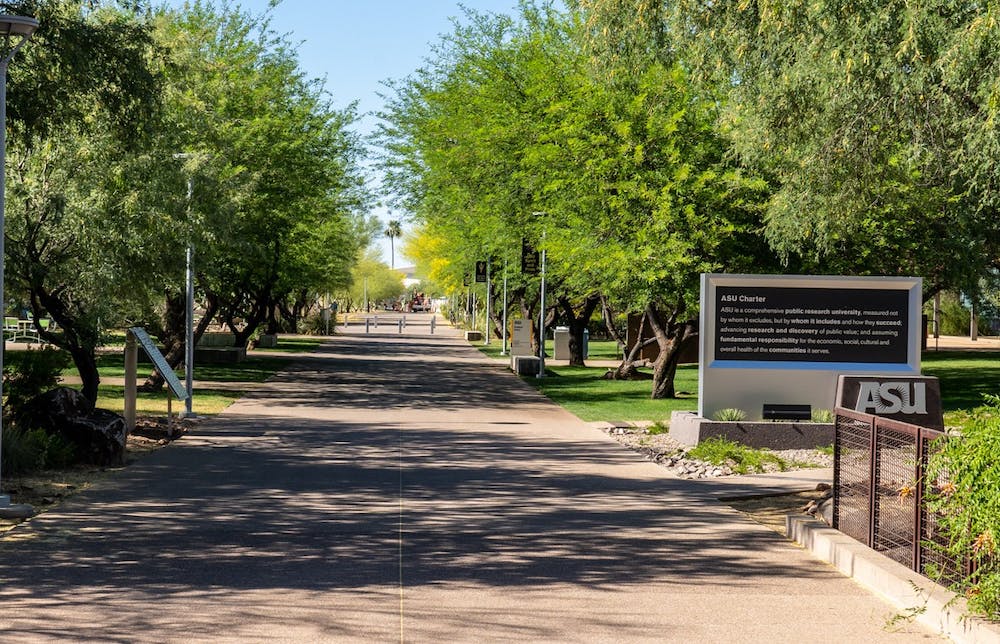 The ASU charter is pictured outside of the Student Union on the Polytechnic Campus on Thursday, May 21, 2020.

Anthony Gant, a sophomore studying automotive systems at the Polytechnic School, remembered being in classes of 30 people with two women, and even classes of 80 people with about six women.

"I'm not a woman, so I don't really know what happens," Gant said. "But the stuff that I hear, I mean, it's just too male-dominated."

Recent data from National Center for Science and Engineering Statistics found women account for less than one-third of all workers with bachelor's or higher-level degrees in science and engineering occupations. Black, Hispanic and Indigenous people account for 13%.

"When you're so outnumbered, it can be harder socially," said Hercel.

Administrators at the Polytechnic campus did not respond to multiple requests for comment.

Hercel found she was not alone, stumbling upon an invitation to a meeting hosted by the Women in Science and Engineering club, or WISE.

First established over a decade ago, the club has dedicated itself to providing a space for women in STEM to connect and support each other.

"Our tagline was literally, 'Do you ever feel like you're the only girl on campus? Cool, us too! Come join us and be a part of our club.' We put that on our flyers," said McBreen, who is the club president.

Typical WISE meetings focus on different aspects of personal and career development, such as resume building and networking, with an emphasis on empowering women in the workplace.

A post shared by WISE at ASU Polytechnic (@asuwise)

One of the most common challenges brought up by members is dealing with microaggressions, McBreen said.

"Learning how to deal with that in a calm and respectful way, but also really putting your foot down too," said McBreen. "Because you don't want to come off as too weak or too soft, and then feel like they're just going to walk all over you. But also not so strong and not so aggressive that they start calling you ‘bossy,’ or 'a bitch,' or any number of different derogatory words for women that stand up for themselves."

Preparations are currently in place for a "courtyard chat" event in March where members will meet one-on-one with different female faculty and staff from ASU to discuss career advice. Other events have ranged from mental health nights to self-defense classes, McBreen said.

The club also regularly coordinates with the on-campus middle school, ASU Preparatory Polytechnic STEM Academy, to host events and tours of the school.

"It's always nice to just see someone else doing it. I know when I look at a female in STEM, it makes me think 'Oh, I can do it, too,' and it motivates me," Hercel said. "So maybe if prospective students see some of the female organizations, they would feel more comfortable."

Natalie Welcome, a science and mathematics instructor who has taught at the Polytechnic campus for four years, spoke to the importance of representation in the field of STEM.

Welcome said people are often surprised at her career. Years of receiving double-takes at her answer to the question "What do you do?" has made her feel self-conscious at times.

The nature of "right and wrong" embedded in the curriculum of mathematics, science and engineering has contributed to this culture, she said.

"It comes down to validation, everything needs to be validated. Especially in a math class, we're trained to get the answer," Welcome said. "There's a very high standard and from that can come the suspicion that you don't belong."

Female engineering students encounter the same experience of not being validated for their work.

"I definitely have felt like I have to work harder and push myself more to be seen as an equally viable candidate compared to my male counterparts," McBreen said. "Guys are engineers and girls are female engineers.

"Sometimes it's like, 'Yeah! Women engineers!' and I’m proud of that," McBreen said. "But other times, it's kind of like, 'Why did you need to bring that up?'"

Welcome said reversing this mindset starts in the classroom, and professors must be thoughtful about how to make their curriculum as inclusive as possible.

Welcome, for example, gives students a project where they are assigned an influential mathematician in history and they’re tasked with making a presentation about their contributions to the field.

"If I grab the most apparent, prevalent mathematician, that person is a white male," she said. "But if I really work and put in the extra time, I see diversity across the field and find females who are influential in our subject matter. I'm looking to highlight those."

Although injustice has tried to write women out of history, it is more crucial than ever educators help tell their stories, Welcome said.

"At the end of the day, I love my major, I love what I'm going to do in the future," Hercel said. "It's really just breaking the statistics and showing young women and people of color everywhere that like you can be whatever you want to be."