The artistic gem of downtown Phoenix creates an aura of inspiration by combining art, espresso and style

Palabra, located a stone's throw from ASU’s Downtown Phoenix campus, is a self-described collective. And for a place that's more things than it's not, this is an incredibly apt description.

Primarily a hybrid between a beauty salon and an art gallery, the space also hosts a newsstand with independent magazines and art books, an espresso, cocktail and wine bar in one (with a kitchen), as well as a selection of boutique hair products and other curated goods.

But all these seemingly unrelated ideas haven't been put together by accident.

"Everything within the space are things that I genuinely am passionate about," said Jorge Ignacio Torres, the founder and creative behind Palabra. 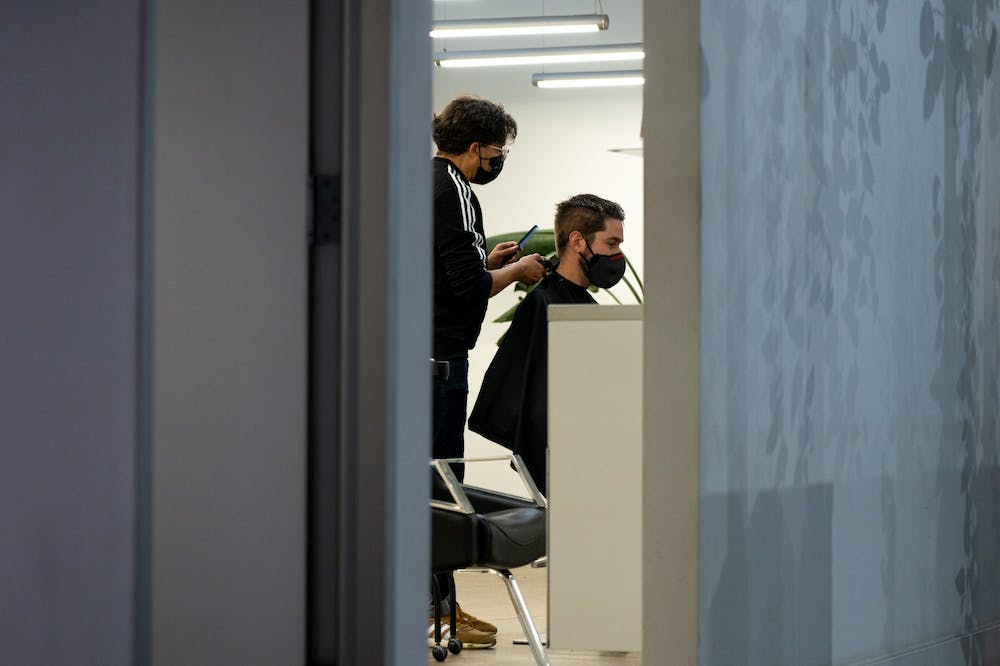 A person receives a haircut at Palabra, a local business in downtown Phoenix, on Thursday, Jan. 21, 2021. Palabra also offers coffee and features local products and art.

The haircuts and dye jobs that walk out the doors of Torres' collective are in line with the feeling of the space itself – they are anything but traditional.

Palabra's team of stylists specializes in bright pops of color, fatally chic bobs, curtain bangs and balayage, the process of hand painting highlights into hair to give a more natural look.

Instead of a wall of swiveling chairs and mirrors in the salon area, the walls are filled with pieces from local Phoenix artists, and there is even a back room where Palabra hosts vinyl listening parties. They even rent out the same space for events or photoshoots.

The drinks bar — called "Futuro" — offers exclusively single-origin espresso drinks and unique seasonal roasts from Ethiopia, Kenya, Honduras, among other countries. On the alcoholic side, there is an impressive assortment of mixed drinks and wine, and the kitchen itself — called "Pasado" — featuring traditional Mexican fare like pozole, churros and tamales.

But perhaps the most impressive part of Palabra is that despite all the hats it wears, it never feels eclectic. The space has that undeniable vibe so many places that try, fail to capture.

"When it comes to the coffee, the art, now the kitchen, everything within the space is a huge part of my life," Torres said. "It's easy for me to facilitate or present something that's honest."

There is a sense that every part of the Palabra experience has been carefully curated and collected, but it does so without feeling calculated or conceited.

Though Palabra feels like it has always been there — in the way all low-key "if you know, you know" places feel — there was a time when it wasn't. During that time in Torres' life, the space within him Palabra fills was conspicuously empty.

Torres said when he moved to Arizona, he felt there were "a lot of things missing. At least for (his) personal self."

Palabra came into existence in 2012 as a response to that, to fill that void and create "a place that someone could come in and not only feel comfortable, but also feel inspired."

"It was beautiful that people were able to appreciate and foster the ideas we were doing, but initially, honestly, it was created because it was just missing," Torres said.

Since then, Palabra has become Phoenix's nerve center for artists and creatives of all backgrounds, heritages and intersections — a place where a hairstylist, a sculptor and a chef can philosophize and share ideas over coffee.

"It took me so long for me to find my niche," Torres said. "For me now to have the platform to create and present things that the youth can be inspired by at a much earlier state in their life than me, that's my ticket."

If there is one thing Palabra definitively is not, it's ordinary. And while its haircuts are most certainly transformative, not a hair on your head needs to be touched for you to walk out a new person.