Review: 'The Stand' (2020) is a better-than-average pandemic thriller

While the new adaptation makes quite a few mistakes, its compelling cast and creative visuals make it a flawed but enjoyable ride

When Stephen King first published his legendary novel “The Stand” in 1978, few could have imagined its various stages of evolution.

From the publication of the "Complete and Uncut" edition in 1990 to its miniseries adaptation in 1994, it’s fitting that a book about a deadly super-flu pandemic would continue to mutate and change as it reached more audiences.

Fast-forward to March 2020, and suddenly people started to notice some odd parallels between King’s seminal pandemic horror novel and our own health crisis.

From the rapid spread of the disease to the divided halves of America fighting for the soul of the country, it’s hard to ignore the similarities between the novel's own viral outbreak and COVID-19. So, it’s no surprise all eyes were on CBS All Access when it started to release hints about its adaptation of the novel.

Helmed by director Josh Boone (of “The Fault in Our Stars” and “The New Mutants” fame), this updated adaptation was set to bring the terrifying story to the modern day with a brand new ending written by King himself.

While the adaptation makes quite a few mistakes in its attempt to adapt an over 1,000-page novel into a nine episode miniseries, its compelling cast and creative visuals make "The Stand" a flawed but enjoyable ride.

The series follows the deadly virus known as “Captain Trips” and a group of survivors who are forced into two warring factions — the “Free Zone” in Boulder, Colorado, led by the saintly Mother Abagail, and “New Vegas,” under the control of the evil Randall Flagg.

The series gets off to a rocky start, by choosing to begin the narrative after the pandemic with flashbacks filling in the details before it. While this may seem like a smart way to truncate the plot, in doing so, much of the horror is drained out of the story.

Visually, there are some wonderful moments, from the amazingly disgusting makeup on the virus’s victims to the digital effects that bring the more magical moments of the plot to life. A moment involving a supernatural pregnancy stands out as particularly gruesome.

But one of the series’ biggest flaws is it’s too short.

The novel, for as long as it is, takes time with its large cast to create moments that get under your skin and make you genuinely scared. The uncut edition's prologue was so unsettling I had to stop reading. In the series, this scene is reduced to a rushed, two-minute sequence that barely serves any purpose.

Luckily, the rushed pacing does not deter the talented cast members from making the most of their time on screen.

Of the main heroes of this story, Jovan Adepo, James Marsden, Greg Kinnear, Odessa Young, Brad William Henke and Irene Bedard all make compelling protagonists. Their chemistry mixes wonderfully, and you really feel for the characters as they start to unravel the central conflict.

Owen Teague and Amber Heard are also quite compelling as a pair of Boulder survivors who become tempted by the allure of New Vegas, with Teague in particular creating a nuanced and complex character in the sociopathic Harold Lauder.

Whoopi Goldberg is effective as Mother Abagail, but is unfortunately not given much to do until the end of the series. I would’ve liked to see more moments with her, considering her character is the force that brings our main heroes together in the first place.

The performance that is probably the highlight of the entire series is Alexander Skarsgård's take on the “Dark Man” himself, Randall Flagg.

This character has actually been brought to the screen twice before, first by Jamey Sheridan in the 1994 miniseries, and then by Matthew McConaughey in the 2017 adaptation of “The Dark Tower.” While both portrayals are solid, it’s Skarsgård who crafts a definitive version of the character, playing him with a collected confidence and charismatic charm that makes it clear why he’d be so beloved and feared by the people of New Vegas. 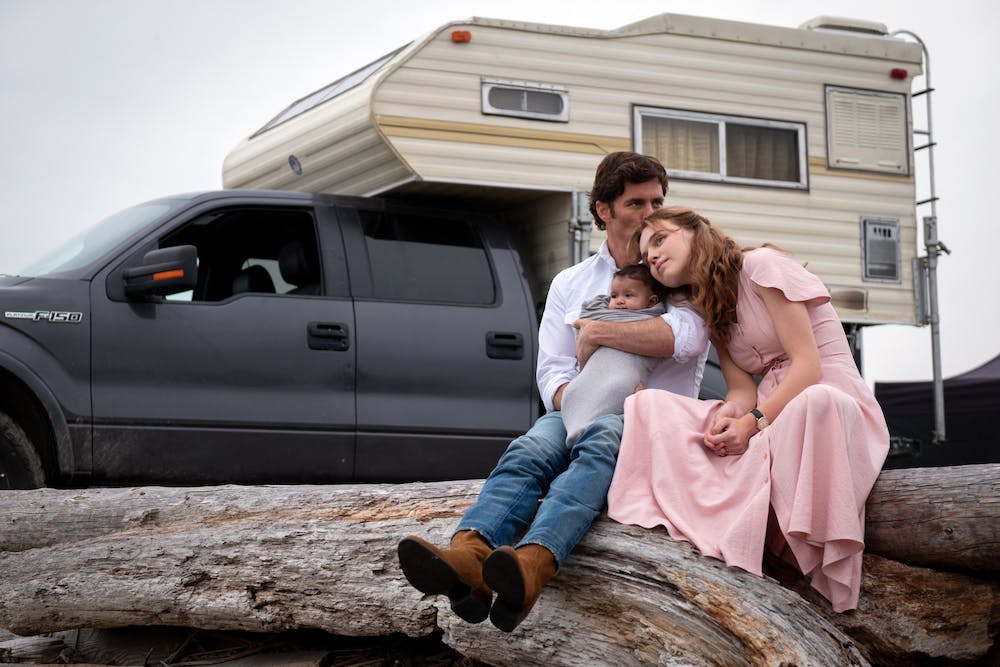 James Marsden and Odessa Young on set for a scene of The Stand, on an unknown date.

One major misstep in the casting has to be Ezra Miller, who plays the complex character of the Trashcan Man with as much subtlety and nuance as a fork being violently drilled into a person's skull.

Every decision they make turns the character into a screaming, barely-verbal caricature of mental illness so hideously offensive it is a wonder why nobody on set put a stop to it. Thankfully, Miller’s screen time is mercifully short compared to the rest of the cast.

CBS All Access’ “The Stand” is certainly not perfect.

In fact, it’s not even the best series out there to binge. With its rushed writing and lack of genuine scares, it is bound to rub people the wrong way. However, the brilliant cast makes up for it and is certain to keep people interested, even if the story itself fails to do so.

It may not be for everyone, but for those seeking a better-than-average pandemic thriller from the master of horror, “The Stand” proves to be an imperfect but entertaining watch.