A symphony of cactus pods shaking, leaves rustling and pine cones rattling filled the Secret Garden with sound on March 20 and 21 as part of a sound installation using new coding technology to examine and showcase the complexities of plant interaction.

Devin Arne, a graduate student working toward a doctoral degree in music arts, created the installation, "Unheard Voices: The Embodied and Networked Intelligence of Plants" as part of his dissertation to show how art and technology can be deliverers of social change. 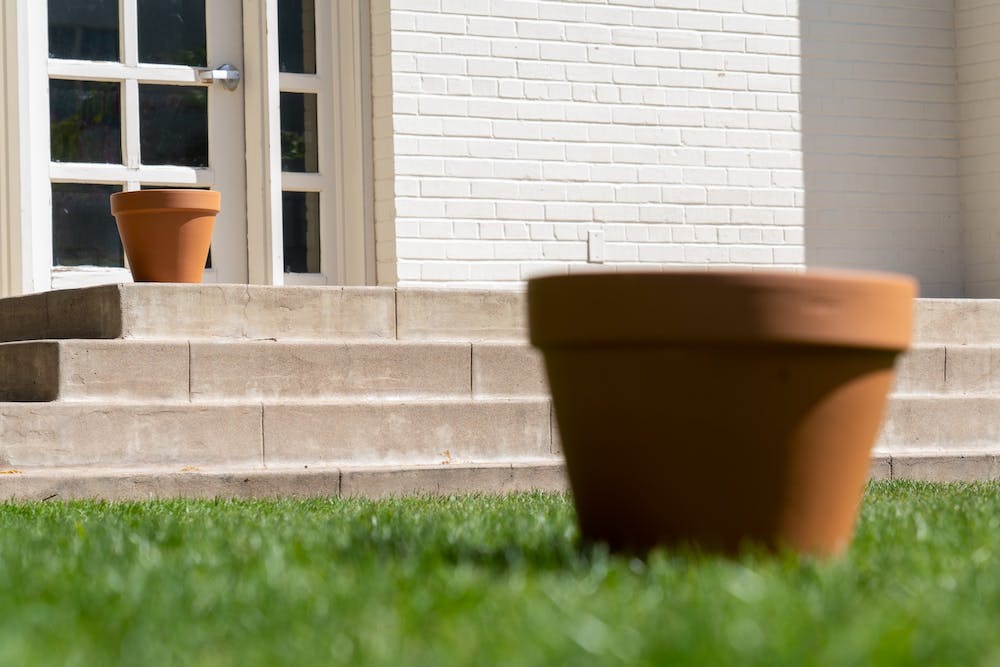 Flower pots which contain microcomputers attached to speakers are pictured on the lawn of the Secret Garden. The pots are a part of "Unheard Voices: The Embodied and Networked Intelligence of Plants," a dissertation to show how art and technology can be deliverers of social change.

The collected data drives the sound processes in the installation, and based on the information received, the speakers, which hung from trees and were spread out on the lawn in flower pots, emit samples of plant noises that Arne recorded previously. As the environmental factors change throughout the day, so do the recorded sounds.

"All the sounds are sourced from plants that I played as instruments," Arne said. Among the plants featured were agave seed pods, cactuses and pine cones, as well as some plants found in the Secret Garden.

During the installation, the recorded sounds layered on one another, creating a peaceful environment that fit right in with the calmness of the location. A few students even stopped by and studied during the presentation.

Arne was partially inspired by the similarities between plant communication and Happy Brackets, a programming language he is studying at ASU.

Happy Brackets is "a set of libraries that use the Java programming language and make it very quick and easy to compose music and make sound on micro-processes," said Garth Paine, an associate professor at the School of Music, Dance and Theatre, co-director of the Acoustic Ecology Lab at ASU and collaborator on Happy Brackets.

The programming language works over Wi-Fi on individual units, which allowed Arne to set up sensors and speakers all throughout the Secret Garden. Each component communicates with one another, much as plants do.

"In the same way ... in which the plants talk to each other through their root systems, we're able to replicate and model that through having these devices," Paine said. 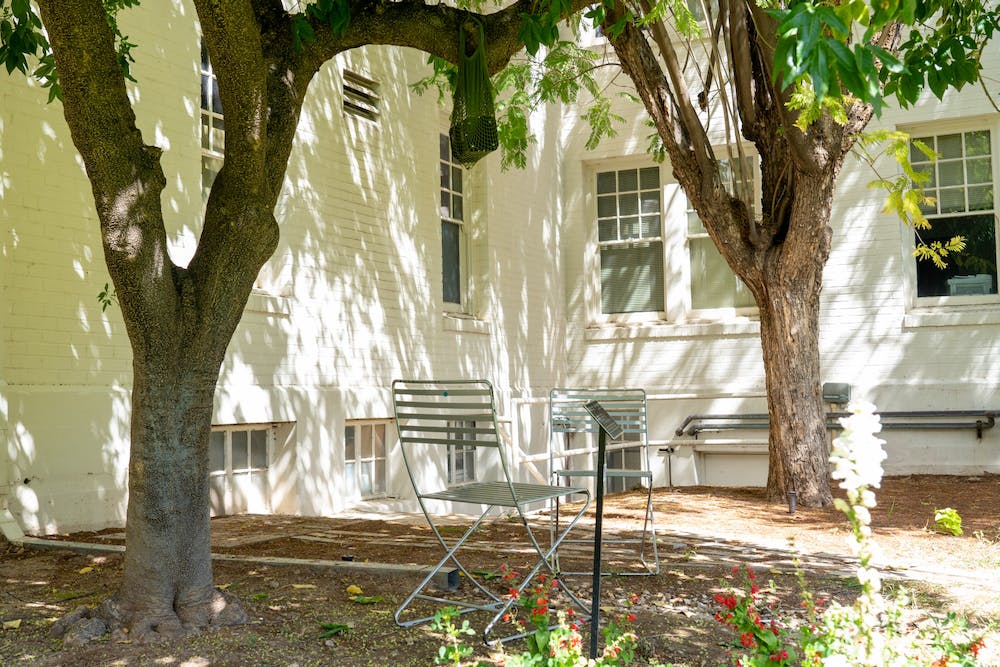 A microcomputer attached to a speaker is suspended on a tree branch in the Secret Garden. "All the sounds are sourced from plants that I played as instruments," Arne said.

Happy Brackets research is funded by the PLuS Alliance, a collaboration between ASU, King's College London and the University of New South Wales, which allowed Paine to collaborate with Oliver Bown, lead of the programming language, and teach Happy Brackets at ASU.

With the knowledge of the programming language, Arne focused on plant communication and plant intelligence. He explored research done by Monica Gagliano, an evolutionary ecologist, that suggests plants may be capable of some level of cognition.

Understanding the complexities within plants and the environment, though, takes careful listening. By listening to what plants have to tell people, society can begin to change its behavior to support the environment, she said.

The field of acoustic ecology "is really considering the sounding world as an ecology and thinking about the health and balance of that acoustic ecology, and how that impacts us and other animals," Paine said.

READ MORE: Students experience sounds of activism and the desert at Mexican Border 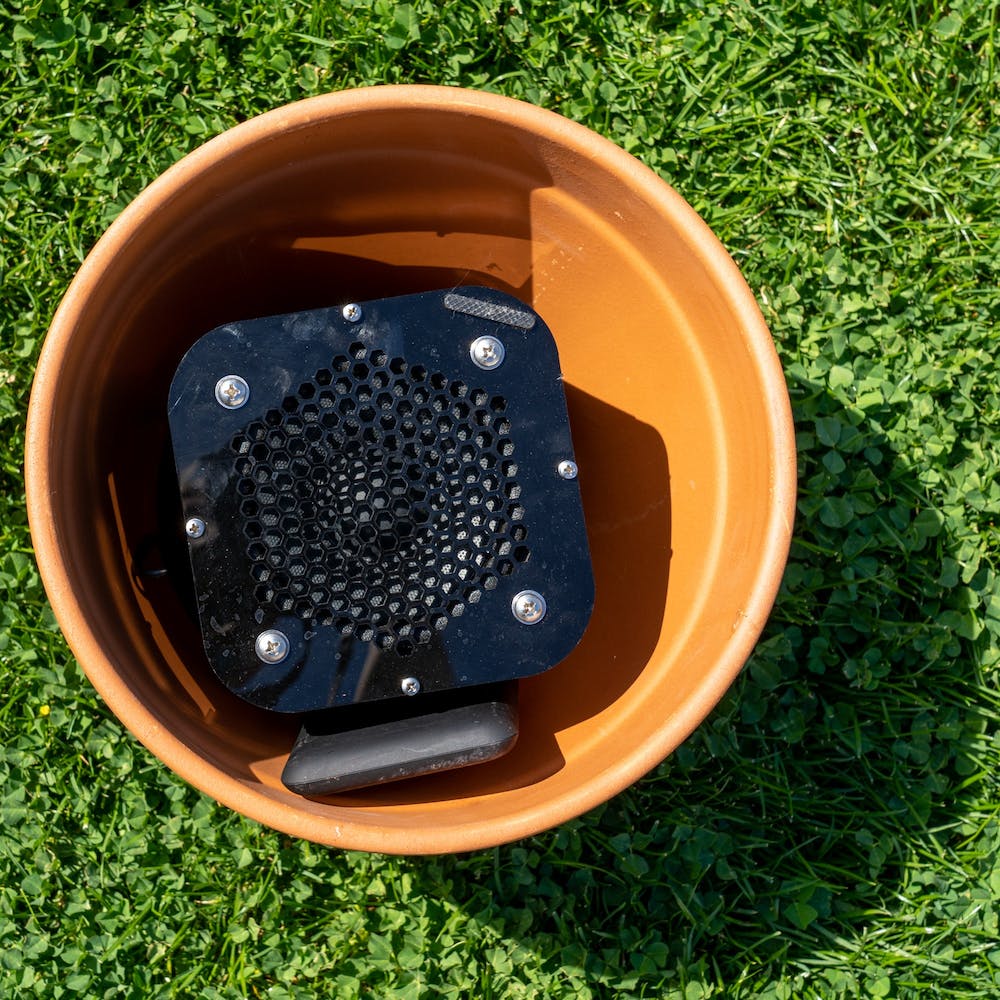 A flower plot containing a microcomputer attached to a speaker is pictured on the lawn of the Secret Garden.

"We have a lot to listen, to pay attention to, and so that's kind of my hope that we can become more inclusive and open our curricula as professors, and that students find new research topics and new things to explore," Feisst said. "Hopefully, our planet benefits from all of it."Projects like Arne's draw attention to plants and issues of ecology, hopefully paving the way for social change, Paine said.

"I honestly believe the arts is the most powerful way to tell the story (of ecology) to direct people's attention towards things they never thought about before," Paine said.

Arne, who is also a composer, producer and guitarist, was able to explore music he had never considered. Instead of composing his own piece of music, he had the opportunity to surrender the musical controls to the plants in the Secret Garden, creating a sound experience that requires you "to be present," he said.

By letting the natural processes in the garden drive the sounds emitted, Arne was able to find the "certain balance of letting go," he said. "What comes from that is really great surprises."

"This is much cooler than me turning some knobs on a synthesizer," Arne said.

Meet the future of the ASU men's tennis program