Thrifting through the ages: How we've strayed from central values

From humble roots to anti-establishment motifs, thrifting is seeing a shift toward high-end resellers

Thrifting has been around for as long as modern civilization has existed — selling and purchasing secondhand items has long served the general public.

Although the secondhand trade has remained a constant throughout multiple millennia, the values and expressions behind this form of clothing consumption have fluctuated throughout each era. These changes show thrifting can become a part of any culture, some in bigger waves than others.

The history of of secondhand clothing

The etymology of the word “thrift” comes from 1300s Middle English “fact or condition of thriving," and "prosperity, savings.” Its origins can be seen as growing not from desperation, but from using resources carefully to prosper.

“The secondhand trade is one of the oldest forms of clothing for the common man,” said Dennita Sewell, professor of practice and a fashion expert at the Herberger Institute for Design and the Arts. “Every era it comes to provides a reflection of the ideals of that period.”

The beginning of the trade can be pinned back to the 1300s and appeared as piles of clothes in market squares. As society began to modernize, the secondhand trade began as a bartering system, serving low income communities during the Middle Ages.

Despite its existence in earlier times, the modern idea of thrifting was fully created in the mid 1800s to the early 1900s with founding of organizations such as Salvation Army and Goodwill.

Thus, the early era of thrifting in the 1900s was associated with unjust ignorance and judgement, a sentiment that continued until the Great Depression, when consumer demand for secondhand clothes was greater than supply itself.

With rapid societal change throughout the 20th century, the later half proved to be much more open minded with the idea of the second hand. The '70s in particular began a new wave of thrifting, relating heavily to the counterculture of the era.

“The 1970s was all about expressing individuality to the youth counterculture,” Sewell said. “Thrifting represented freedom for them. The hippie movement allowed secondhand clothing to have more value and become chic again.”

Although the 1980s stressed all things new wave with outrageous styles that popped up on the daily, thrifting still had a grasp on many underlying subcultures — icons like Andie Walsh in "Pretty in Pink" kept the thrifting passion alive by mixing old and new.

The rise of the grunge era in the '90s was a complete turnaround from the shiny and colorful ‘80s — icons like Kurt Cobain led the revolution of returning to thrift and turning away from establishment.

“The '90s were all about grunge, and that could be found in thrift,” Sewell said. “It was about being heard and speaking on anti-establishment in the beginnings of a changing world.”

As time moves forward, thrifting remains a constant in our society — the secondhand clothing and resale industry is estimated at $28 billion, with no signs of decreasing. Throughout the years, it has been representative of new life through immigration, freedom and individuality, connection of past and present, and commentary on the establishment.

But now, in a world consumed by fast fashion, the values connected to thrifting in the 21st century are more difficult to pinpoint. 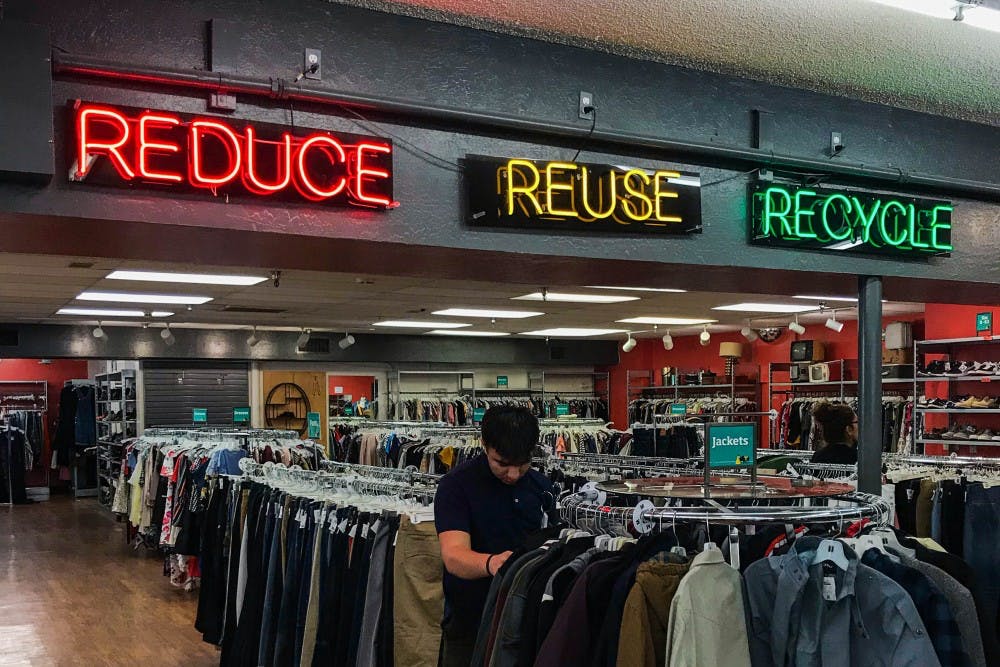 A customer browses through clothes at Buffalo Exchange in Tempe, Arizona, on Thursday, Nov. 1, 2018.

With fast fashion exploiting human rights and the environment for a lower price point, fashion consumption feels like a double-edged sword, sacrificing morals or money. Thrift shopping in the 21st century seems to be the answer to this problem.

Given the rise of the internet and online shopping with the technological advancements of the modern age, it’s only fitting that thrifting has gone digital. Depop, a London-based startup app, does just that.

The app acts as part social media and part eBay, allowing any user to be the buyer or the seller. Similar to brick-and-mortar thrift stores, the purpose is to affordably shop for clothing without ethical or environmental concerns.

The exclusivity of Depop by resellers adds to wealth privilege in the thrifting community.

At its roots, thrift shopping fights against feeding into the fast fashion industry, encouraging cultural values of sustainability, affordability and consumer consciousness. In many cases, thrifting outlets such as the neighborhood Goodwill seem to keep these values alive, but the online market has allowed for internet resellers to impact the market in in-person stores.

“It’s hard to enter a Goodwill and see a pair of pants for $20,” Sewell said. “Thrifting has always been for the common man, but the increase in price causes a cut-off.”

One search through Depop can show users a variety of secondhand clothes that appeal to their aesthetic, mostly at reasonable prices. However, that same search may lead to shoppers finding a Fullmetal Alchemist t-shirt listed for over $200. When reverse searching the item, the same exact piece can be found for $14 from a different seller.

Saw a depop reseller get pissed and said that thrifting takes time and hate towards resellers are unwarranted...but y'all are ones selling 3$ thrifted items for 70$ soooo maybe the hate is warranted

“The increase in prices leads to a question of why you would spend very much on something used if you could get something new for less,” Sewell said.

The new values of thrifting in the era of the 21st century can be seen as a return to the environment and finding something new in the new, two concepts that have many positive effects on the fashion consumption world. It once was a uniting force for the common man to thrive and prosper through saving, but the exclusivity of modern thrifting has lost its roots.

Despite the different values that connect to thrifting in different eras, a constant thread of thrifting being anti-establishment and for the common man has been consistent since the 1300s.

"In the ‘70s through the ‘90s, thrifting was about rejecting the norm," Sewell said. "It wasn’t your mother’s couture, but a statement that dressed the radical movement."