The mission to the Psyche asteroid, mostly made of metal, is in its assembly and test phase and is set to launch in September 2022

The recently completed main body of the Psyche spacecraft will launch the ASU-led NASA Mission to Psyche into the assembly and test phase of their project.

The mission is for the Psyche spacecraft to investigate the asteroid, also named Psyche, which orbits the Sun between Mars and Jupiter.

The completed body, called a chassis, has been delivered to NASA's Jet Propulsion Laboratory. The spacecraft will carry the necessary instruments and data needed to complete the mission.

After being built by space technology company Maxar Technologies, the chassis was sent to JPL to complete the rest of the spacecraft. The components must be assembled along with the computer system that will power it in order for the spacecraft to reach and investigate the asteroid.

The mission, which is ASU-led along with partners at NASA, JPL and other universities and institutions, plans to launch the Psyche spacecraft in September 2022. The craft will spend the following three years traveling to and investigating Psyche to determine what it is made of and how it was formed.

"The goal is to orbit the asteroid for 21 months and learn about what it is," said Lindy Elkins-Tanton, principal investigator of the mission and the vice president and professor at the School of Earth and Space Exploration.

The origins of the Psyche mission and spacecraft

Elkins-Tanton said from the data they've collected here on Earth, the asteroid is mostly made of metal.

"It would be the first metallic object that humankind has ever visited," Elkins-Tanton said. "Making it a new class of celestial body and a new kind of exploration."

The mission started from Elkins-Tanton's research investigating what are known as "planetesimals," or miniature planets.

After her paper was published, Elkins-Tanton was approached by NASA and asked her to propose a mission to use her theory to test if the Psyche asteroid was once part of a planetesimal.

"Almost all the materials that fall to the Earth are from the asteroid belt," Elkins-Tanton said. "What we have never seen is a big piece of a core or a big metallic asteroid."

In order to stay on budget, Elkins-Tanton's team decided to use solar power as the electric propulsion system.

To achieve this type of propulsion, Elkins-Tanton and her team turned to Maxar Technologies.

Maxar uses solar electric propulsion on their own Earth-orbiting satellites, it knew the necessary details for the construction of Psyche.

After Elkins-Tanton and her team convinced NASA headquarters that Maxar would be the ideal partner for the mission, the construction of the chassis began.

Peter Lord, deputy program manager for Maxar, said the company's unique electric propulsion capabilities and its abilities to be cost effective helped them become a partner in this mission.

"It was just the point where our commercial capabilities intersected with what NASA was looking for and needed and it just clicked," Lord said. "The timing was just right with our new system to really enable a deep space mission."

Maxar specializes in creating Earth-orbiting satellites, so a mission like Psyche that will be sent into deep space was a new kind of project for them. 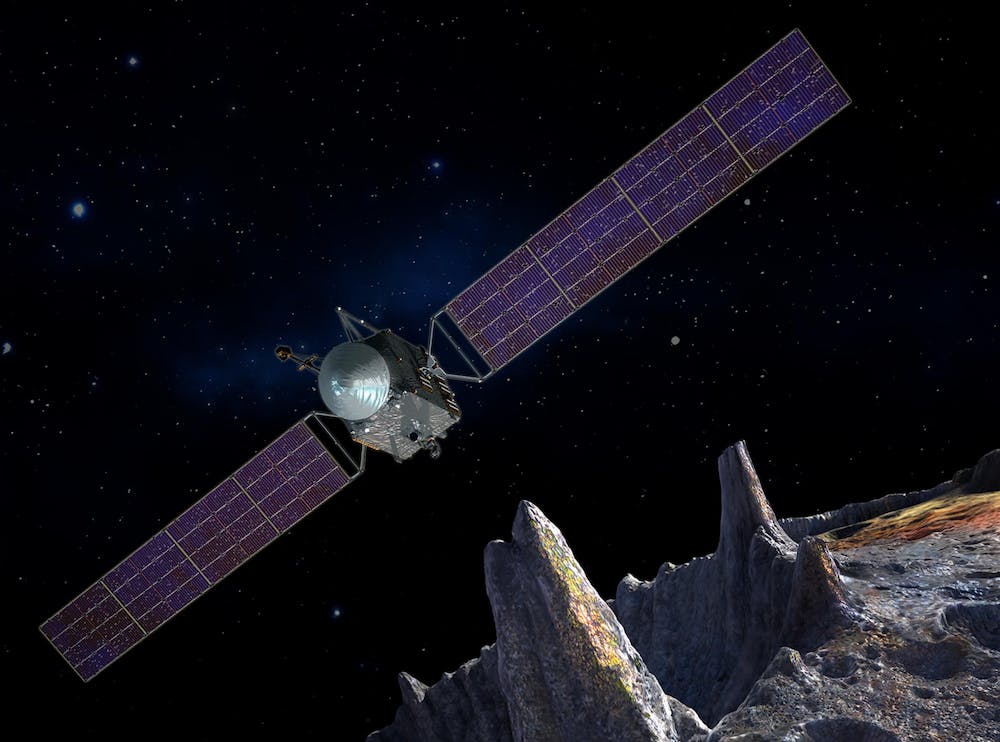 An artist's concept of the Psyche spacecraft, which will conduct a direct exploration of an asteroid thought to be a stripped planetary core.

Lord said even with all the aspects of Psyche that were similar to their own satellites, there were areas that Maxar had to "wrestle and understand" about the new environment.

Deep space missions have different challenges: different temperature ranges, unique motion of the spacecraft and an altered method of launching into orbit.

The instrumental pieces of Psyche

In the design of the chassis, Maxar had to incorporate a number of requirements when building it. In order to complete the investigation and understand the science behind the Psyche asteroid, three main instruments would be placed on it as well as a different computer processing system.

These three instruments — multispectral imagers, a Gamma-Ray and Neutron Spectrometer and magnetometers — will help researchers study and analyze aspects of the asteroid as the spacecraft carries out its mission.

The multispectral imagers are sophisticated cameras that will provide various types of images of Psyche, which ASU is developing.

The Gamma-Ray and Neutron Spectrometer, which is being developed at Johns Hopkins University, is used to search for abundance of elements, including iron.

Magnetometers will detect the magnetic fields that might be preserved on the asteroid's surface and are being built by a partner in Denmark as well as the Massachusetts Institute of Technology.

Once these three instruments are completed, they'll be sent to JPL and integrated onto the Psyche spacecraft.

Since Psyche will not be landing on the asteroid, these instruments will help the team conduct the necessary testing in order to understand what the Psyche asteroid from a distance.

Jim Bell, deputy principal investigator of the mission and a professor at School of Earth and Space Exploration, is overseeing the development of the multispectral imagers. He said that even without landing on Psyche, being able to take images and conduct tests in orbit will provide the necessary insight into the asteroid and complete the mission.

Maxar also had to wrestle with the problem of being able to power Psyche in order for it to complete its journey and mission. To ensure that Psyche has enough power, Elkins-Tanton said Maxar developed two solar rays roughly the size of tennis courts that will be attached to either side of the craft.

"The solar rays are literally sized to be big enough so that by the time we get to Psyche, there's just enough to run those electric propulsion thrusters," Lord said.

Now that Maxar has completed its work on Psyche's main body, the Psyche team is in the Assembly, Test and Launch Operation phase of the mission at JPL.

Dan Goebel, a senior research scientist and chief engineer for the spacecraft at JPL, said since the chassis is now complete, they will incorporate the components necessary for deep space travel, including JPL's own software and processing system as well as the communication system.

"There is a very long process of design and tests in order for the spacecraft to qualify, and then we actually fly it," Goebel said. "JPL is an implementer."

Once these parts are incorporated into the spacecraft, the necessary tests will be run to make sure that everything works properly.

During the ATLO phase, the team has "every single day planned out." And although the COVID-19 pandemic has limited the number of people that can be working on the spacecraft, everything is said to be going on schedule.