Nurses, physicians, medical students and undergraduate pre-med students gathered at Grace Lutheran Church in downtown Phoenix on March 27 and April 11 to administer COVID-19 vaccines to people in Phoenix without homes.

"And then once the semester actually kind of started to open back up, I was on the forefront of just trying to push getting actual outreach again," Das said. "Because now is the time for these individuals to actually receive those medical services."

Das, Hanna and Zeien decided they wanted to expand the runs to help these vulnerable individuals fight COVID-19, but they knew it would come with some challenges.

"When we did our needs assessment, Justin and myself ... we're nobody," Hanna said. "We're strangers on the streets and there should be no reason for those individuals to trust us and we saw that. That was kind of our biggest barrier."

Das said establishing trust between their volunteers and their patients on the streets was an obstacle, but an even bigger problem was misinformation, and often the lack of information at all.

During the vaccination "street run" on March 27, Das said he saw a man sitting alone from the others. "He was sitting in the tent, and I approached him about what we were doing — you know, administering the J&J single-dose vaccine," Das said. "And basically he first said, 'What vaccine?'" 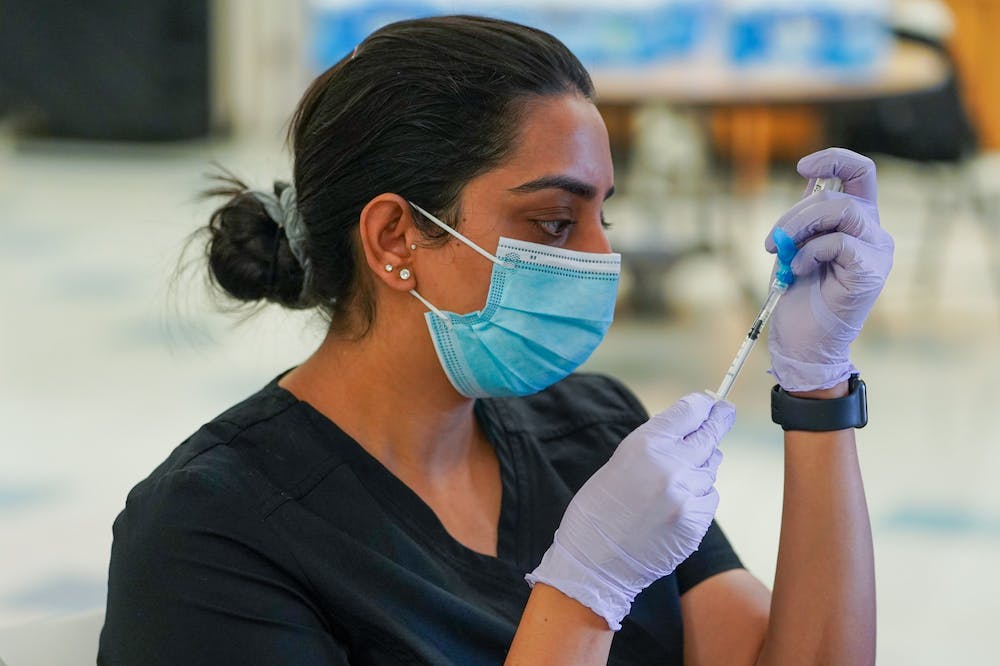 Manrit Gill, a first year medical student at UA and volunteer vaccination administrator, prepares a dose of the Johnson & Johnson vaccine at the Grace Lutheran Church in downtown Phoenix on Sunday, April 11, 2021.

Medical Directive and Street Medicine Phoenix obtained 100 Johnson & Johnson vaccines from Maricopa County, according to Das. They administered 46 of the doses at the first event on March 27 and approximately 54 doses on April 11.

At the two events, dozens of volunteers came to support their community.

"By being here, I guess I've learned about their personal struggles," said Randy Bravo, a volunteer and graduate student studying science of health care delivery, referring to people experiencing homelessness. "It makes me be more cognizant of what people are going through in our community and so it kind of motivates me to continue helping our vulnerable populations."

Jeremy Hershaw, a 39-year-old man currently experiencing homelessness, was one of the patients who received a vaccine at Grace Lutheran Church on April 11.

"I work inside grocery stores every day, so dealing with so many people. I mean, it's a great thing to get vaccinated," Hershaw said. "I'm not gonna worry at work whether or not I'm going to catch the virus, or not. It makes everything so much easier and it's less stressful."

"A lot of minorities and Latinos don't have access to the vaccine, and I feel bad for all my brothers and sisters," Martinez said. "There are things I wish they would be able to have access to. I'm sure that there's a lot of people that have passed away and I don't like that."