Tired, burned out students look forward to fall return with some hesitation

The University still plans to welcome students back for the fall semester to participate in on-campus, in-person instruction across all four campuses

With just a few more months until the start of a new academic year, some ASU students already enrolled and taking classes mostly remotely don't quite feel ready to get back in the classroom, despite the University's plan to do so.

In the middle of February, ASU President Michael Crow, Provost Mark Searle and Provost Pro Tempore Nancy Gonzales announced the Fall 2021 semester was likely to be on campus and in person with just a select few courses available through ASU Sync and iCourses.

In February, Crow said the school wasn't ready to make a decision on whether a vaccine would be mandatory for students. The University is now, according to an email sent to the school community this week, surveying students and employees on who has been vaccinated in order to assist in a phased vaccine distribution to the ASU community with the help of the Arizona Department of Health Services.

Students have been living, learning and working alongside the pandemic for over a year, a time period that has spanned three semesters and a summer session.

"I enjoy learning, I enjoy education. But not right now," Hedges said, explaining how her classes have been a mix of ASU Sync and in-person study and tutoring sessions. It's too hard to learn how to solder wires together over Zoom, she said.

"As a STEM student, labs are really big, important parts," Sharma said. "Especially because I'm pre-med, it's kind of important that I know these things. But because they're virtual, it's pretty hard to actually learn something." 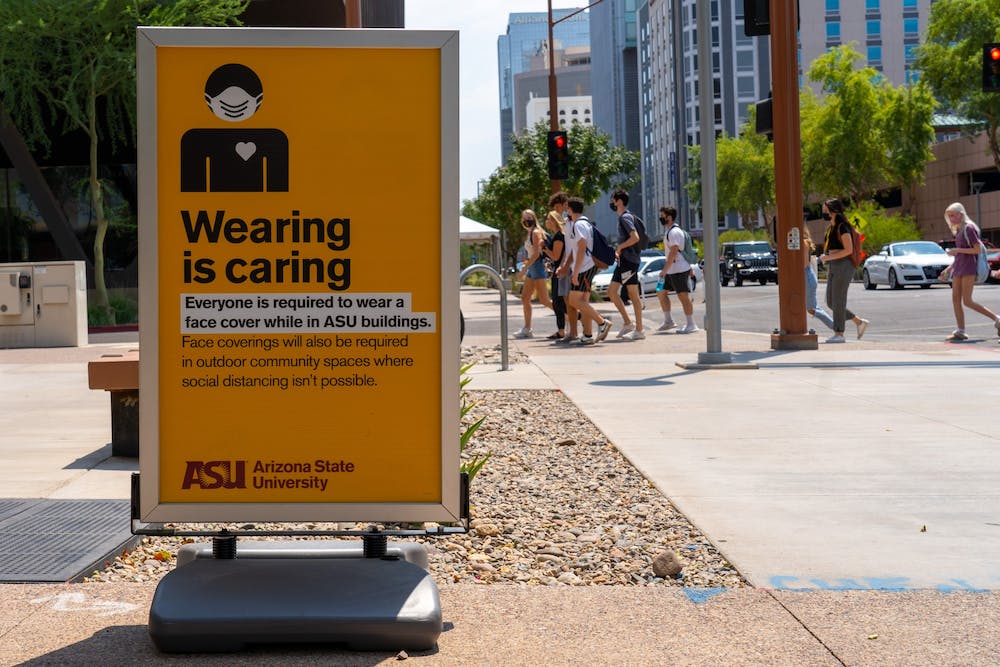 One of ASU’s “Wearing is caring” signs is pictured while students walk toward the Taylor Place dorms on Thursday, Aug. 20, 2020, on the ASU Downtown Campus.

Like some other students, Sharma said she can't wait to be in a classroom again, taking a class surrounded by other students she can interact with before, during and after lectures.

As a commuter student, Sharma said she is excited to return to in-person classes next semester and avoid having to go from a class on campus to one on Zoom. Sharma said she's looking forward most to talking to people again.

"I'm very introverted, which I leaned into (during) the first half of the pandemic," Sharma said. "But now, I want to talk to strangers, even though it goes against everything that I used to like."

Sharma said isolation caused by the pandemic and burnout caused by the University's cancelation of spring break was "a very hazardous mix."

"I've kind of gotten used to just rolling out of bed in the morning, logging in and then going back to sleep," Hedges said, adding how changing from that routine to in-person instruction is going to be difficult.

Professors have been more lenient on late assignments and with grading, Sharma said, a practice she hopes continues in semesters to come.

"COVID will have residual effects, it's not like it's going to be completely over by (the fall semester)," Sharma said, adding she hasn't lost any family members to COVID or taken a huge financial punch, but knows other students who have.

Sharma said she's been following reports on when the U.S. is most likely to reach herd immunity but hopes masks will be mandated in large lecture halls and other indoor spaces. She worries more virus variants will emerge and some students won't get vaccinated.

Hedges said she's already been vaccinated but is worried about being on campus because of other students she describes as "knuckleheads" who have not gotten a vaccine even though they likely are eligible.

"The sooner we can get back on campus, the better it will be for everyone," Sharma said. "If (the University’s decision to welcome students back) is based on herd immunity predictions, I think it's pretty sound."

Cody Brock, a senior studying computer science who expects to graduate in December, isn't so sure the University's intentions and hopes are based on science.

"It was a strange announcement to make so far in advance," Brock said. "(The return to campus has) reinforced the impression I've had since the beginning of the pandemic, which is that these decisions have been based more on the school's finances and optics than on the health or well-being of the community."

Unlike Hedges and Sharma, Brock is "not looking forward to returning at all."

He said he doesn't understand why there has been a rush to take the ASU Sync option off the table and "would feel much better if (the University allowed) people to continue to participate remotely, instead of preemptively deciding that the pandemic is going to be over several months from now."

University administrators have already said mask-wearing and social distancing will likely be part of the fall semester's protocol but other details about what that will look like across all four campuses is not quite clear.