Review: 'This and That' exhibit explores race and gender in art

And her most recent exhibition “This and That," emphasizes these exact themes, allowing spectators to reflect on the representation of race, gender and class in art.

“My life is art. I love making art,” Landrum said. “I’d rather be making art than anything else in the world. I believe that it should be educational, not just beautiful. Art has the power to move people, and we should capitalize on that.”

“This and That,” which is being showcased every day until May 8 at the Vault Gallery in the Downtown Phoenix campus' library, is a self-proclaimed journey through the art process and experimentation with the new. By using everything from watercolor to German toilet paper as art mediums, Landrum has a mind for creativity, and the exhibit exemplifies it.

Her painting series "Urban Gardens Hair" takes an abstract route reflecting on living in an urban space as a Black woman in the U.S.

“Moving into the city after living in a rural community, you realize everything is concrete, the opposite of how I grew up,” Landrum said. “How does nature grow in the city? If it does grow, what does it look like? These paintings are an exploration of that through the diversity of people I’ve witnessed in cities and how they expressed themselves uniquely through their hair.”

The series is a progression of hair and nature taking over, Landrum said. Going through each painting in order tells a story with the initial ones focusing primarily on buildings and a later one highlighting a curled braid, representing the turn toward nature as the central focus instead of the tall buildings behind it. 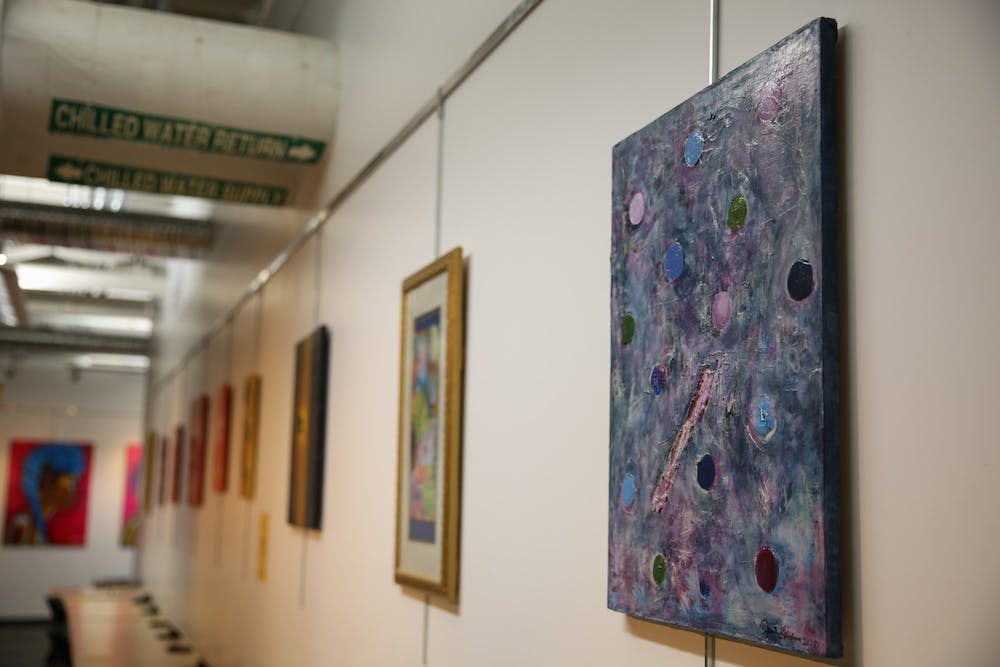 A piece from the “This and That” art exhibit inside the ASU Downtown Library is pictured on Wednesday, March 31, 2021 in Phoenix.

Landrum’s second abstract series is particularly important to her as it represents the energies of the Black men in her life.

“The abstract series in this exhibition in particular is one of my favorites — I could work on it forever,” she said. “I asked them three questions to start and went with my instinct afterward. I was out to show that Black men aren’t just one-dimensional, despite the negative stereotypes the media portrays them with.”

The most unique part of this piece is how the abstract style allows its meaning to change depending on the viewer. While the inspiration draws from the energies of Black men in Landrum's life, a spectator may consider their own relationships when looking at the works. This viewer-art interaction further pushes Landrum’s goal of showing how multifaceted the men can be.

While this particular abstract series focuses on men, much of Landrum's other work focuses on women, reflecting the struggles she faces in the art world. The painting series "A triptych" proves this with social commentary and a pop art flair. With bold colors and large size, these pieces are made to command attention.

“I call those my 'Barbie pieces.' For me, they became an exploration of representation,” Landrum said. “As a child, there wasn’t any Barbie that looked like me. And what did that tell me? I wanted to deconstruct what we knew and include what I thought a modern day Barbie would be.”

The "Barbie pieces" are not only beautiful, but they also open up the conversation of why there aren’t more women — Black women especially — represented in the art world.

“I’ve had a lot of Black women come to me and describe issues that are very similar to the ones I’ve faced, not knowing how to get into some shows and wondering why they weren’t getting into the others,” Landrum said. “I’ve always considered myself a strong advocate for women’s rights. I’m a woman looking for opportunities — why should I not have the same opportunities as a man? I really started thinking about women and my work — how do I utilize my work to create a platform? The work can say things that I can’t say.” 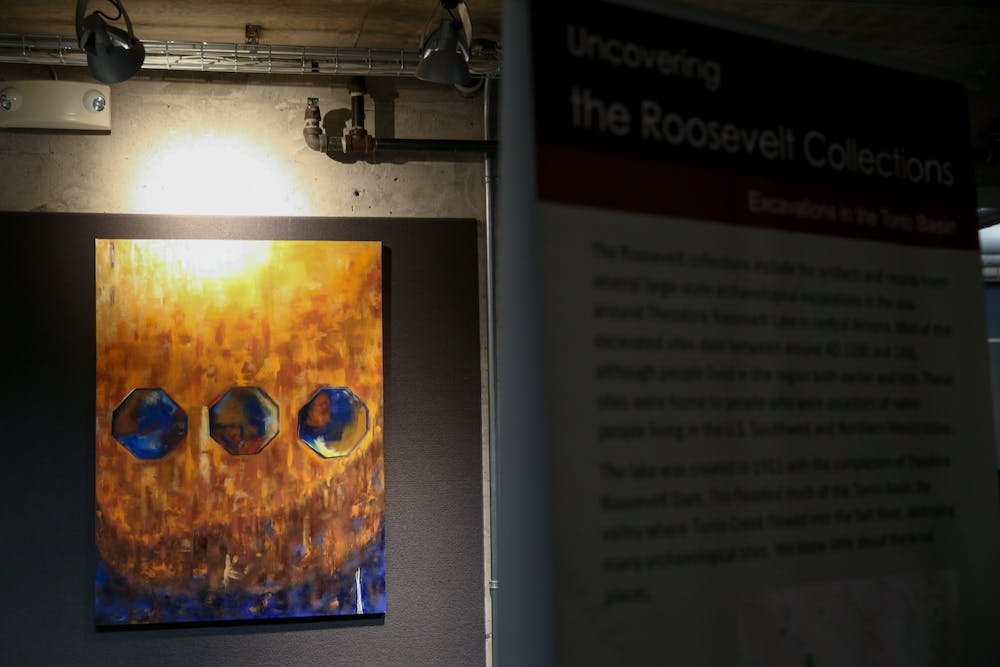 A piece from the “This and That” art exhibit inside the ASU Downtown Library is pictured on Wednesday, March 31, 2021 in Phoenix.

The conversation of race, gender and class is one that is represented in many modern works. Exhibits such as Landrum’s “This and That” bring these topics to the table, poking a hole in the greater systemic issues faced today.

“I hope that my exhibitions break down barriers of what people think art is. Black women are last on the totem pole of art, but there are so many women out there creating great art," Landrum said. "The more we see female artists, the more we expose ourselves to new communities and cultures through art."