With spring and fall sports sharing a semester of games, equipment staff face an increased workload 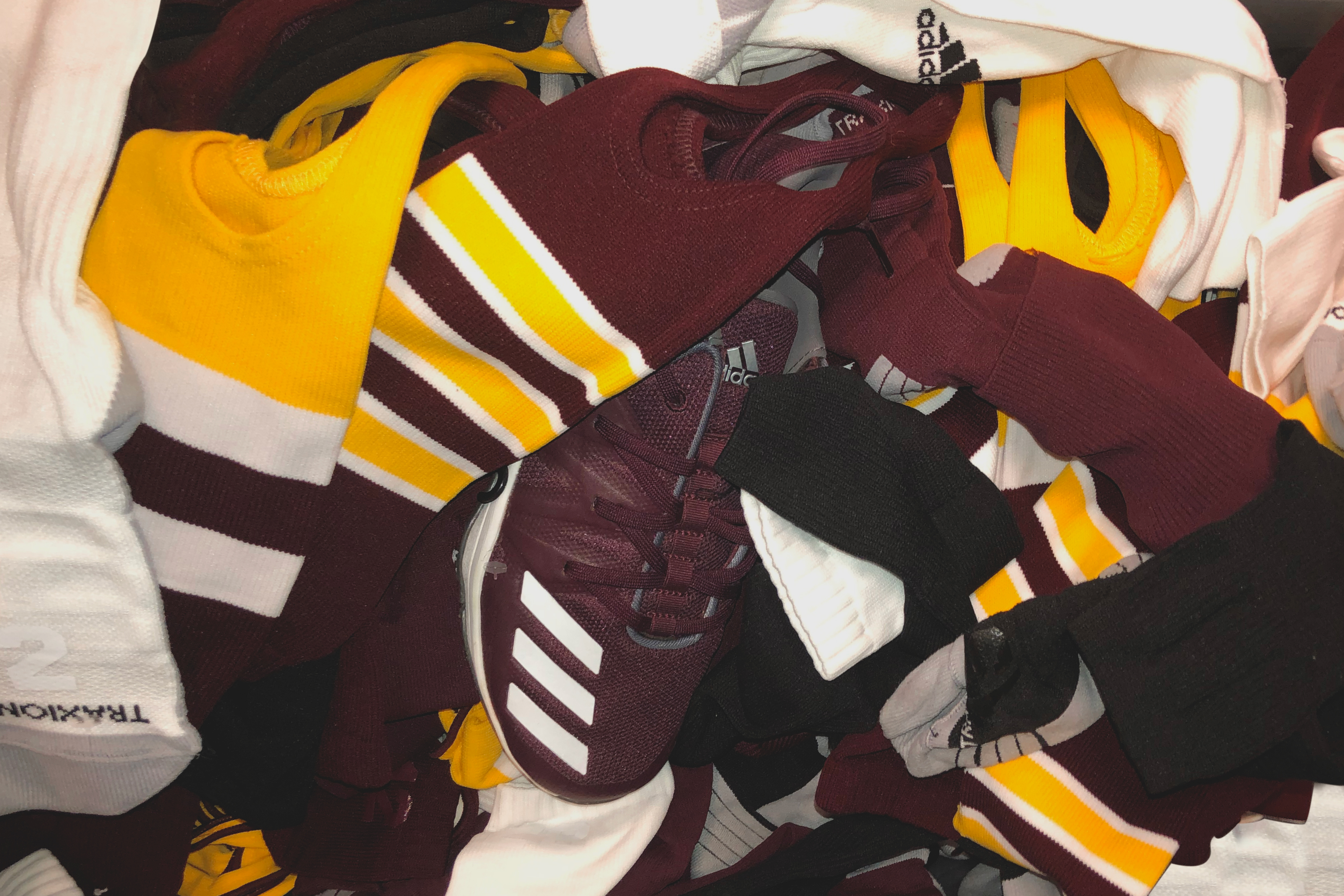 When the Pac-12 canceled all conference athletic competitions in the fall, it was widely regarded as a necessary decision amid a pandemic. Athletes, coaches and fans came to terms with the fact their seasons would not follow a normal timeframe. While football eventually got its chance to compete, dozens of other Division I sports were either canceled or delayed to the spring semester. This means teams like volleyball, soccer and cross country are now occupying the same space on the calendar as traditional winter and spring sports like basketball and baseball.

While the decision was hailed as the safe call for the athletes, who spend their entire lives dedicated to competing at the collegiate level, it placed a heavy burden on an oft-forgotten piece of any athletic program: the equipment staff.

Operating out of Desert Financial Arena, the ASU equipment staff is in charge of overseeing the tracking, cleaning, transport and setup of thousands of pieces of athletic gear. Now, with nearly twice as many sports taking place at once, and COVID-19 posing added regulations for a safe environment, their job is more difficult than ever.

"The equipment staff hasn't missed a day since last March," assistant athletic director Douglas Tammaro said. "They've been in there doing the laundry, cleaning the locker rooms. They have had a non-stop workload."

Trey Routier, assistant equipment operations coordinator who started working at ASU just before the pandemic brought things to a halt, is in charge of seven sports this semester. Track and field, cross country, softball, soccer, men's basketball, wrestling and triathlon all fall under his responsibility.

"Two weeks ago, I think I had an event every single day," Routier said. "Whether it was a rescheduled basketball game, a soccer game, it was a lot of extra laundry."

But Routier is hesitant to complain. "One thing with an equipment manager's job is to deal with things as they come. With COVID and how things have been rescheduled, it's been a little bit more (difficult) this year."

"We're happy to have a job," Tammaro said. "We understand things are going to be hard, but as long as we have an administration and coaches' understanding and support, we're going to do the best we can and get it done."

Routier recalled one particularly busy Thursday in February. Basketball, soccer and softball all had games, with specific challenges for each. 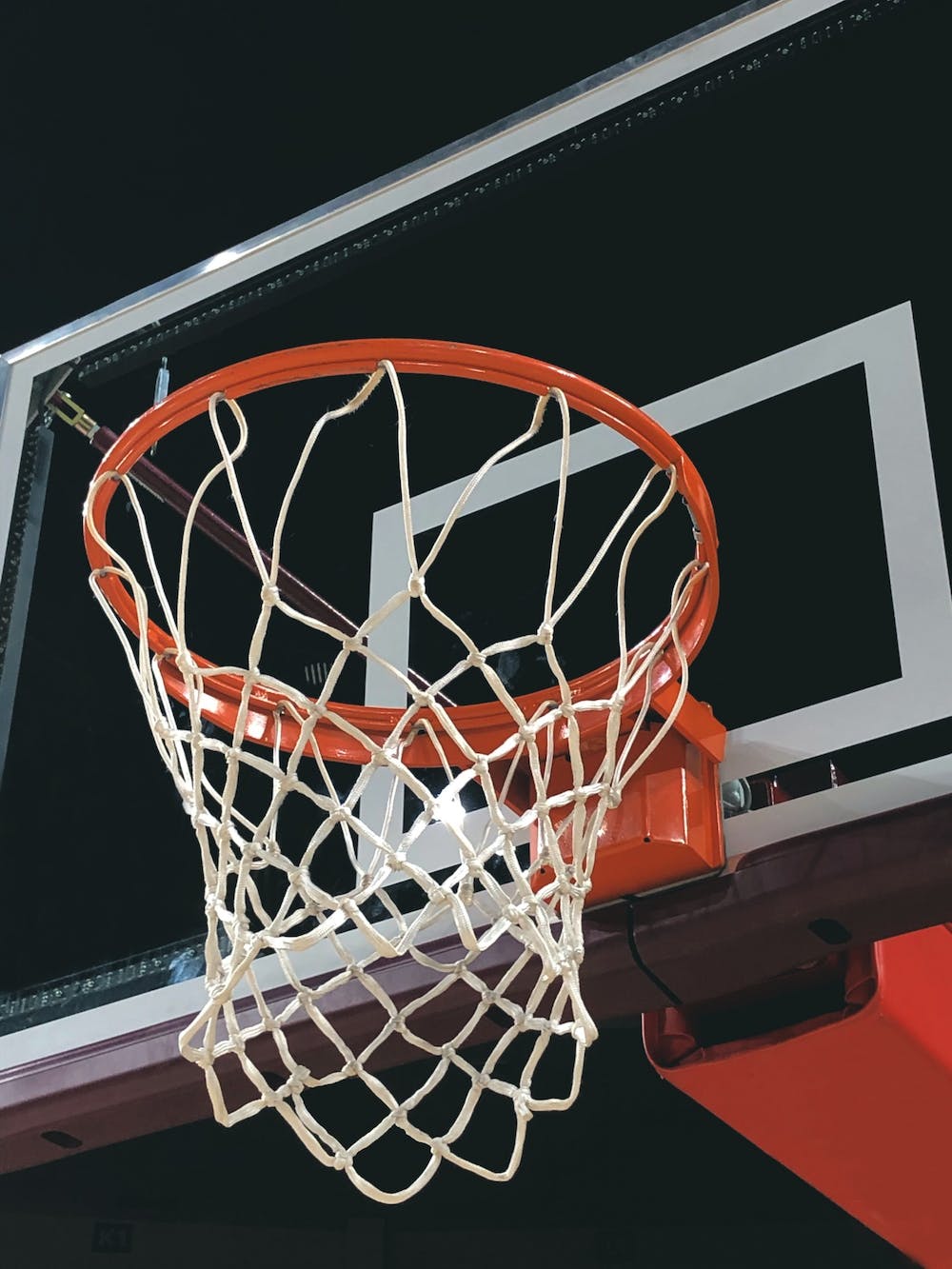 A basket in Desert Financial Arena in Tempe.

"For me it was a lot of running around," Routier said. After preparing the locker rooms at ASU's Alberta B. Farrington Softball Stadium for the opening day matchup against BYU, Routier had to return to Desert Financial Arena to prep the basketball and soccer uniforms. "Then I just kind of play the waiting game until something happens. I think that day actually I had to run new goalie uniforms over to the (Sun Devil Stadium) field five minutes before they kicked off."

If it sounds hectic, that's because it is. Routier moved to Arizona last year from California. After working as a student equipment manager during his undergrad at Virginia Tech, plus years with the U.S. Women's Soccer team and at the University of Redlands, he's picked up a few tricks to deal with the demands of the job. "A good, deep breath definitely helps settle the nerves a little bit," Routier said.

He's not the only one whose job has been upended by COVID-19. Hockey equipment manager Jon Laughner had the unique task of presiding over an entire season on the road. Laughner spent many years working in minor-league professional hockey, but even then the road trips weren't as severe.

Aside from almost 90 bags of team equipment, Laughner's main traveling companion was a 150-pound sanitizing machine.

Before every series, Laughner would bring the machine into the locker room to make sure the players were safe.

"That's a new addition since COVID," Laughner said. "It's me and the fogger."

He was quick, though, to credit those around him who make his job easier. Despite being the only equipment manager for the traveling party, he said he felt supported during the trip. From assistant operations managers to the athletic trainer, there was always an extra set of hands. His biggest realization, however, was how much he missed his student assistant, who wasn't allowed to travel with the team for reasons related to COVID-19.

"I'm starting to realize he did a lot more stuff than I ever knew," Laughner said with a laugh. "I want him back out with me. I much prefer being the guy who gets to sharpen skates and kind of do nothing else." 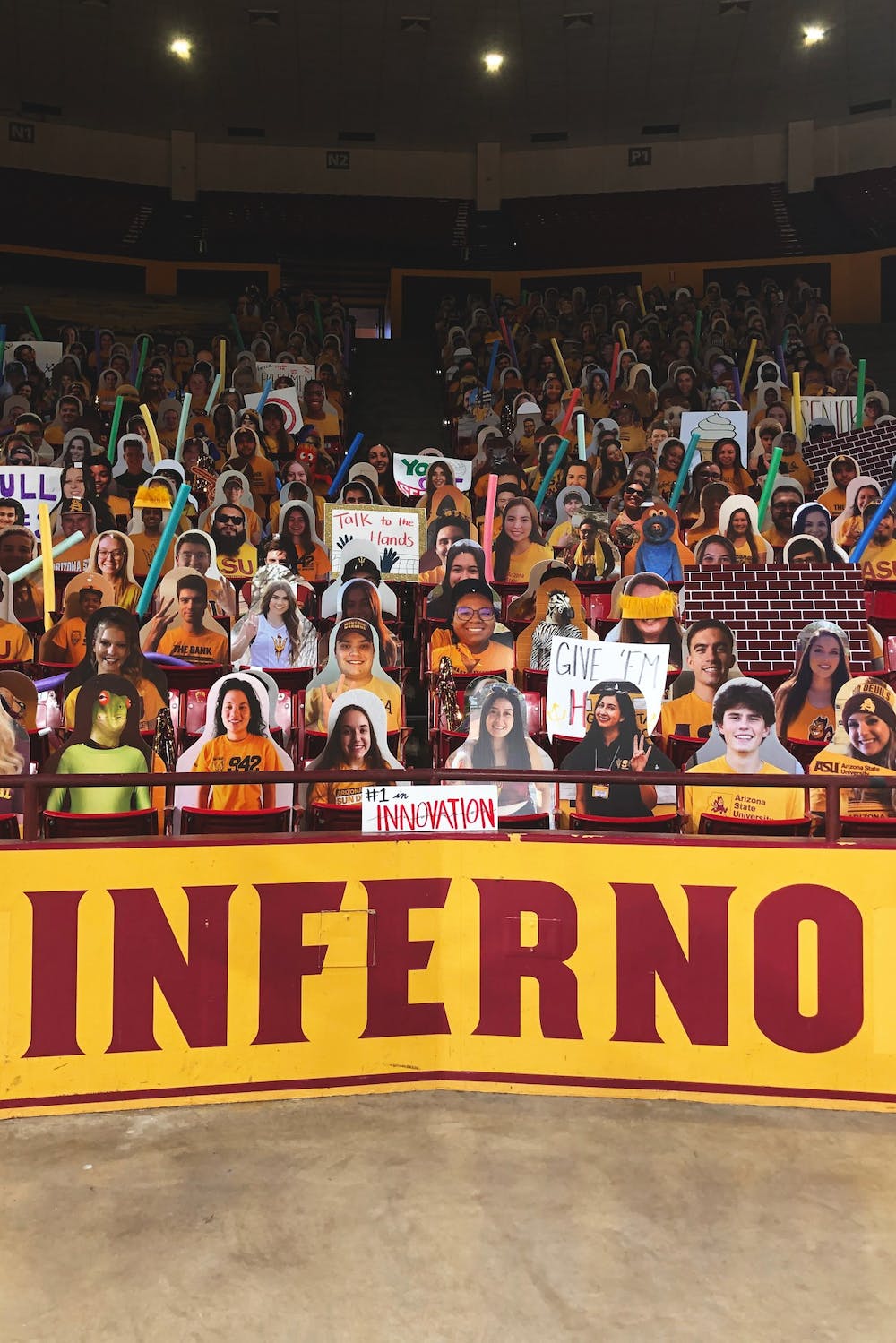 The cardboard cutouts that have replaced the fans at ASU Basketball games.

For now, sharpening skates is just a small part of Laughner's job. The 25 pairs need to be hand prepared prior to each match.

"The hand that they've been dealt is not their fault obviously," manager of equipment operations Mark Zimmer said. "Nobody's complained."

Zimmer told of the time he joined Laughner for a road trip in the middle of the season.

"I picked two (series) to go on, not realizing that they stayed out there," Zimmer said. The first weekend featured a series at Boston College, with the next scheduled in Centre County, Pennsylvania. "We actually drove up to Penn State and we were there the whole week. It was an interesting experience to say the least."

Zimmer detailed the struggles faced by the equipment when COVID-19 protocols force the postponement of contests.

"You get ready and pack the team up to go on the road, and then suddenly you can’t go," Zimmer said. "You unpack everything, you have to wash it so you can hang dry it, otherwise it'll have been sitting in a bag for ten days and uniforms will come out wrinkled."

ASU men's basketball had two program shutdowns this season due to COVID-19, with a total of eight games being impacted. This uncertainty was stressful for those behind the scenes.

"There's a lot of wasted preparation that has gone into sending teams on the road, getting ready for games that just get canceled, due to nobody's fault except the pandemic," Zimmer said.

The job has faced a new level of uncertainty. "With how things have been canceled and moved around, it's been a little bit more trying to stay on your toes and expect change," Routier said.

Since equipment is one of the few things consistently in proximity to the athletes by necessity, the staff must be vigilant at all times.

"You want to be a lot more cognizant of making sure everything is disinfected," Routier said. "If we're to go down with COVID, that could shut down a lot of things. We've been pretty good and pretty safe with everything."

Despite the constant pressure and changing of plans, the routines of the job keep those who do it in the moment. Routier continues his game day ritual of preparation and meditation. He's constantly ready for that buzz of a cell phone which will send him on the next task in the never ending spin cycle of his job.

"I love interacting with the student-athletes," Routier said. "I just enjoy being around sports. This has always been a job that I really enjoy working."

It's this sense of pride and purpose which drives equipment managers to this occupation. They're an integral part of the fabric of athletics, and they realize what they do is critical to a successful program.

"All of our players put in massive amounts of work and sacrifice to be able to get into a position to play," Laughner said. "As support staff, it's our job to support them in those games. Anything we can do to make it happen is something we’re going to do." 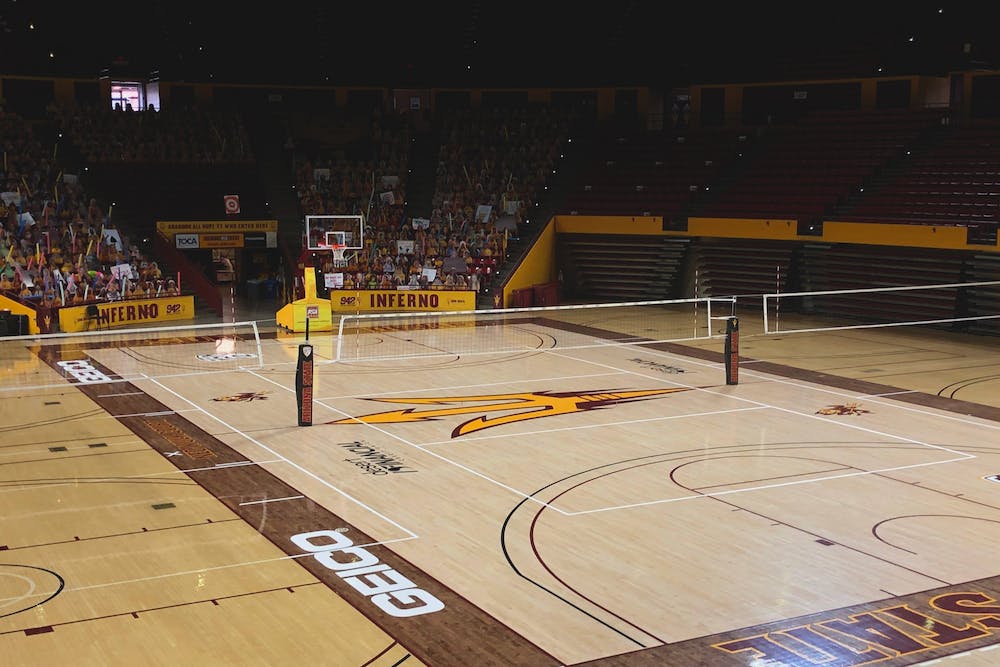 The empty inside of Desert Financial Arena in Tempe on March 22, 2021. Except the occasional staff and press, the stands have remained empty save some cardboard cutouts.