An ASU graduate class led by Lauren Keeler and Marta Berbés-Blázquez, assistant professors in the School for the Future of Innovation in Society, partnered with the city to put up climate stories in four Tempe parks in efforts to get citizen feedback for a Tempe Climate Action Plan update.

The professors and Francesca Lascala, a graduate student studying science and technology policy, presented the climate stories project to Tempe City Council in a meeting April 15.

"When we think about the University and the pipeline of ideas and projects that come through the University, this is the epitome of that," Councilmember Lauren Kuby said in the meeting.

The climate stories, designed by the students in partnership with Tempe, prompt residents to respond to two real-life scenarios set in 2035. The stories ask for their feedback on how they would prepare for climate emergencies, ideas on how to serve people who don't have reliable access to electricity and what resources and solutions they would like to see from the city.

"The impetus behind it is to broaden the conversation and to bring as many voices as possible," Berbés-Blázquez said.

The first story asked respondents about what they would do in the event of a rolling blackout in Tempe on a hot summer night. The same story raised awareness around resilience hubs, which are community-serving facilities that provide refuge and electricity for evacuees and first responders during emergencies. The hubs also provide education and community-building activities and programs during recovery and preparation times.

"These are all important parts of ensuring climate justice is equitable and accounts for everyone," Lascala said in an email. "Having resilient community centers is important for ensuring every resident's safety and well being as we begin to experience more and more extreme weather (heat)."

The concept is gaining momentum in a variety of different cities nationwide according to Braden Kay, director of sustainability for the city of Tempe. Tempe's first resilience hub, called the EnVision Center, is set to open in August near Apache Boulevard and Dorsey Lane near ASU's campus.

Set on April 10, 2035, a holiday celebrated as Dolores Huerta Day, the second climate story has residents walk through a scenario where they visit a local community garden and participate in a march for climate justice.

The story sought to raise awareness about Dolores Huerta, a Latine labor leader and civil rights activist who worked with Cesar Chavez to advocate for farm workers. The Tempe City Council voted to recognize the day annually on April 10, celebrating it through a scholarship for high school seniors and to encourage youth activism and climate action.

Kay said the inclusion of Dolores Huerta Day in the climate stories was meant to bring people of color to the forefront of the climate debate, help deconstruct racism and address the needs of historically underinvested communities.

"When it comes to extreme heat, there are very particular neighborhoods that are affected," Kay said. "And that means that additional resources and efforts need to go into making sure that those neighborhoods have more shade, have more urban forests (and) have more transportation amenities in order to be resilient, high quality of life neighborhoods in the next several decades." 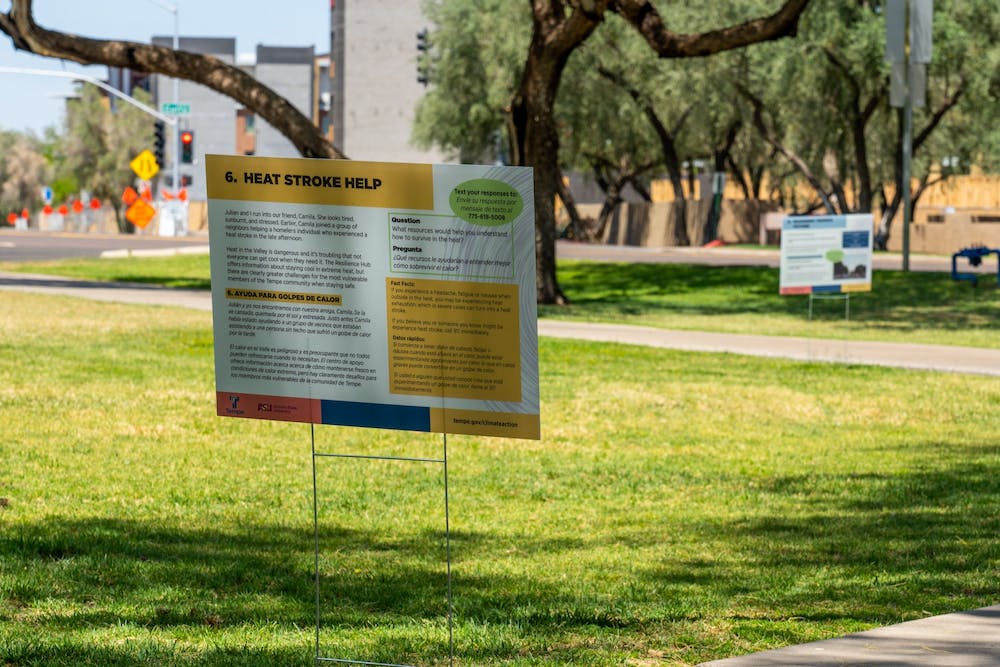 Alex Gould
One of the signs that is a part of the Climate Action Plan's Climate Narratives offers readers advice for dealing with the Arizona heat.

There are five guiding principles to Tempe's Climate Action Plan. One of the five being equity, which practices targeted universalism, pursuing policies that focus on underrepresented groups yet also create benefits for all of Tempe, the CAP website says.

"So this story speaks to a lot of folks who have this conception of environmentalism being a very white movement, but no — without racial justice, we're not going to get anywhere near climate justice," Berbés-Blázquez said.

Berbés-Blázquez said the effects of climate change impact frontline communities the most, meaning these neighborhoods are most vulnerable, at risk for exposure and least able to adapt and plan for climate emergencies.

"There's this strong sense that when it comes to climate action planning, those who have contributed the most are impacted the least," Berbés-Blázquez said. "So, we actually wanted to look at those people who are at risk and who are (in) frontline communities, because if those people are made OK and safe from climate change, everybody else would be made safe from climate change."

The Climate Action Plan stories were constructed from conversations the class had in two listening sessions with middle and high school students and the general public in February.

"We were hearing a lot about the desire for better bike structures because it’s very hard to get around in the city right now, so we wanted to include elements (in the stories) about biking. We also wanted to include elements about engagement with the city, like what you yourself can be doing to be involved and make your sustainable impact," Lascala said in an email.

Engagement with the public will continue in the summer based on the model students developed in gathering feedback.

So far, respondents have expressed interest in resilience hubs as a shelter during emergencies and as a community center, and would like to learn more from the city about heat related climate disturbances.

They also asked the city to invest in infrastructural changes to renewable energy and non-air-conditioning reliant cooling processes in city and industry buildings, more assistance for the homeless to combat extreme heat, create additional walking and bike paths with shade and develop new urban and community gardens.

"I think about my family first, and really haven't considered how people deal with the situation of no AC daily. The connection between climate change and socio-economic status was made really obvious in this exercise," a respondent wrote.

Many responses showed interest in topics the city is already considering, and having further support from the public will help make these changes possible, Lascala said in an email.

"The CAP is focused on transportation, energy and heat resilience, so all the points brought up here by respondents resound with the city's current goals and provide creative ideas/solutions to be considered in these areas," Lascala said. "Our goal with these engagements was to listen rather than speak and we have been given a lot to listen to, which is very exciting."

How to submit a response to climate stories

Due to the COVID-19 pandemic, the city put the climate story posters up in four parks — Papago, Escalante, Clark and Kiwanis — to maintain social distancing guidelines and to create a more immersive experience. The students also decided to strategically place the stories in the parks so people who cannot take time off work to attend town meetings can provide input.

"(When) you're walking through the park and it's 100 degrees in April, we can get people to think about what extreme heat would mean because people are engaging with the atmosphere where the story is taking place," Lascala said.

As they walk through the posters, people can text a number to provide their responses to the story prompts. There are also postmarked cards at each park where they can write down their responses and mail it back for free if they don't have access to a phone.

Besides going to the parks, residents can also engage with climate stories in this online forum, or text the number 361-338-5282, where automated messages will guide residents with prompts from the stories.

"I think that's a really important dialogue that's been happening around our climate work, not just in Tempe but in cities across the country, (which) is: Can you just have technological solutions that bring in electric vehicles and bring in solar and solve climate change? And the answer is no," Kay said.