The Sun Devils committed four errors in the game, three of which came in the seventh inning

ASU baseball has generated its success this season by striking a careful balance between having its pitchers throw strikes and relying on its defense to make routine plays. The Sun Devils never committed more than two errors in a game in 2021 before Thursday night when the dam broke.

ASU committed four errors in its 10-5 loss to UA in Phoenix. Three of those errors came in the seventh inning, which led to the Wildcats scoring six unearned runs in the frame.

"The bottom line is we didn't take care of the baseball tonight, and it cost us a baseball game, plain and simple," head coach Tracy Smith said. "That's where it starts and that's where it ends, at least in my mind."

The Wildcats' next batter singled to move a runner to third base, who eventually scored on a wild pitch.

An error by Long, the next batter allowed another player to reach base safely. UA capitalized on the miscue by driving another run home a batter later.

A batter later, an errant throw by redshirt freshman pitcher Graham Osman allowed another run to score, bringing the score to 10-5. 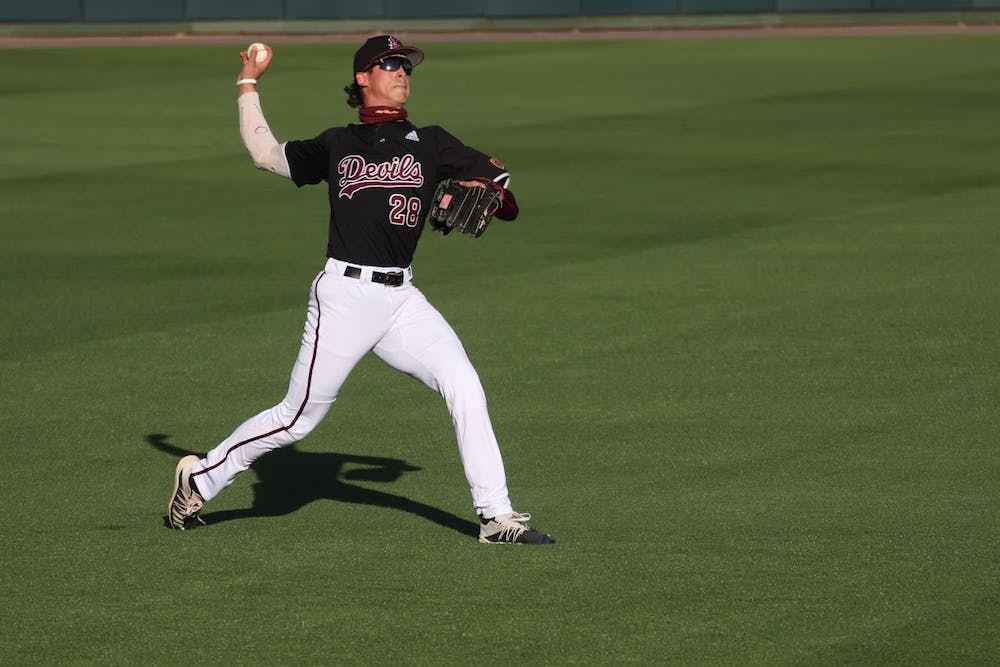 "We were playing a good team, and (if) you give them six outs in an inning, that's probably going to come back to haunt you," Smith said.

Despite the rash of errors in the game, Swift is not worried moving forward considering the team's usually stable defense throughout the season thus far.

"Errors happen, it's a part of the game," Swift said. "I think that we've just got to get ready for the next one and not make too big of a deal about it. We're a really good defensive team, and up until that inning, honestly, we've been outstanding."

ASU's offense scored five runs in the fourth inning but nothing more for the remainder of the game.

Redshirt junior designated hitter Hunter Jump worked a nine-pitch walk to lead off the fourth inning, and the Sun Devils followed that up with five singles.

However, the Sun Devils failed to record a hit for the rest of the game after the fourth. Smith said he did not feel his team put together strong at-bats down the stretch.

"That's a little bit of our immaturity offensively," Smith said. "We've got to do a better job of sticking together consistent (at-bats) and be a threat every inning."

ASU will get a chance to even the series against UA with its next game on April 2 at 6 p.m. MST.