On many farms, "poop water," or the wastewater from livestock, ends up in large manure lagoons. However, Lemna, a 2020 startup co-founded by ASU alumnus Travis Andren, is working to revolutionize the idea of waste in animal farming by turning this poop water into plants.

Lemna, operated by a trio of ASU alumni, including Andren as CEO, utilizes a technique called phytoremediation, where living plants are introduced to polluted soil, air, or water to rid them of contaminants via a highly productive aquatic plant called Lemnaceae — Lemna's namesake.  Popularly known as duckweed, these vibrant green leaves serve more than just electric aesthetics.

The startup was supported by ASU’s Master of Science in Innovation and Venture Development (MSIVD) program. MSIVD assisted Andren, who finished the program in July, in funding and refining a business plan for Lemna's mission to reimagine how cattle farms dispose of wastewater for the sake of the environment, the surrounding communities, and the farmers themselves.

Andren decided to go back to school to raise funds to make the concept tangible. “I didn't want to go get a traditional MBA because I think that leads to a very traditional career path,” which brought him to the MSIVD program, Andren said.

Born in 2020, the one-year program is a unique opportunity for graduate students of any concentration to pursue a career in innovation — whether that be through their own startup or within a pre-established organization.

The program, a partnership between the schools of engineering, design, and business, functions as "an opportunity to learn a methodology of how to create something from nothing," said Interim MSIVD Director Brent Sebold.

Through experience-based learning, students were given the tools to navigate the “open waters of new venture development,” or the “messy process of value creation,” Sebold said. 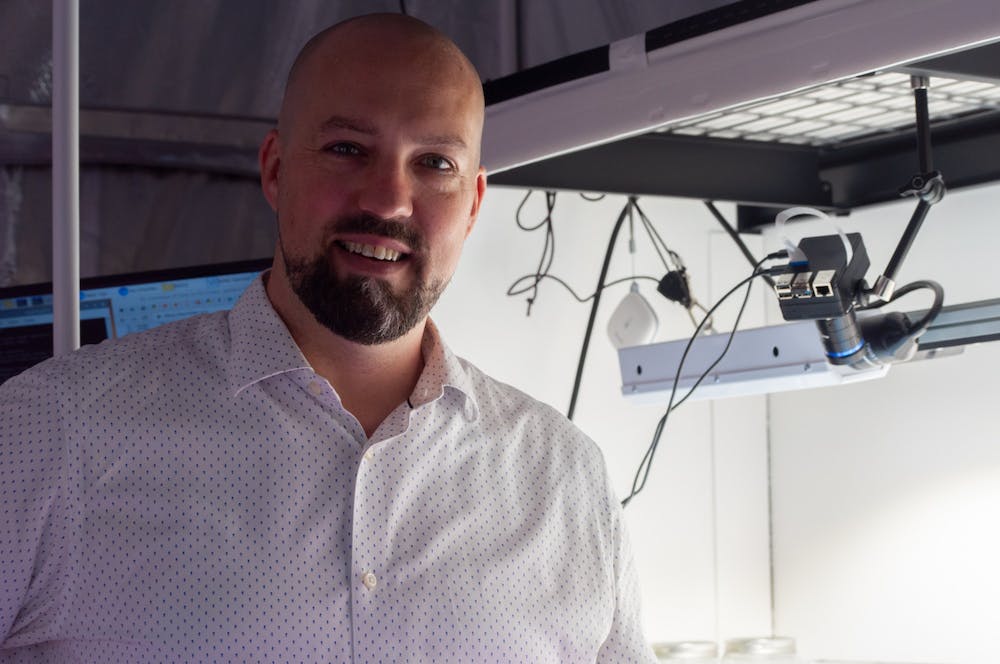 Travis Andren, CEO and co-founder of Lemna, poses for a portrait.

Many industrial animal farms manage their abundance of animal excrement by utilizing manure lagoons, massive pools of watered-down poop, to store the animal waste as bacteria works to break it down. The pools become the hosts for threatening nutrients and contaminants.

Notorious for leaking and vulnerable to flooding, these pools can infiltrate the local groundwater supply and compromise aquatic environments, particularly in coastal areas, said Rebecca Muenich, an assistant professor in the School of Sustainable Engineering and the Built Environment who studies agricultural water quality.

Federal and local government intervention on the matter significantly varies by state and sometimes by county, according to Andren and Muenich. They said even the strictest regulations on nutrient and toxin levels aren't entirely solutions.

Violations of these regulations result in monetary punishment for farmers, yet inflict no direct change in the environment or agricultural system, Andren said. Through Lemna, Andren advocates for the farmers who are subjected to fines but don't have a solution for their wastewater.

Andren was inspired by new research on duckweed and vertical hydroponic farming, a compact technique that provides nutrients to produce and sustain plants in water. He considered utilizing the plants to clean the contaminated manure water, with their ultimate growth being an added bonus.

Duckweed has several valuable characteristics that help it grow from a bud to a leafy plant in just 12 to 36 hours, like rapidly absorbing nutrients and contaminants from water, all while cloning itself to produce more.

To achieve the startup's goal of cleaning contaminated water before it reaches nearby communities, Lemna proposes an alternative to the manure lagoons. The venture designed an isolated system where wastewater is put onto stacked trays and continuously treated with duckweed. This process removes contaminants and balances nutrients until the water is safe enough to put back into the farms’ irrigation system.

Further perks of this design include producing high-protein duckweed plants that can be manufactured into pellets and used as livestock feed or sold and utilized for alternative energy. Additionally, Lemna is capable of providing farmers with “the data and understanding of what's in their water, (which) is a key piece of what's also missing today,” Andren said.

Just as water is at the core of human existence, it is the core of Lemna's mission. "We help make every drop of water that comes through our system more legal, more precise and more profitable for the farmers," Andren said.

However, grandiose ideas and humble beginnings don't even begin to cover this "bootstrap startup," Andren said.

With funding earned from ASU’s MSIVD program, Lemna is currently rolling out phase one of its plan in its independent lab on ASU’s Polytechnic campus. So far, four dairy farms from California and Oregon have agreed to share their excrement for experimentation.

Still, while it has promise, duckweed may not be a perfect solution, Muenich said.

Duckweed’s capabilities to absorb nutrients are dependent on the content of the water itself. Because every farm is different, duckweed will have varying effects that could still leave behind excess nutrients in the water.

During the "Lemna laboratory phase," Andren and his team will seek out the most efficient growth environment and duckweed subspecies to use for cleaning the unique compositions of each farm’s wastewater, Andren said.

But no one ever said the road to success in new venture development was marked and paved. Andren, having entered MSIVD with the concept for Lemna in mind, was an exception to most students in the program, according to Sebold.

"This is not easy ... we need to give (Andren) quite a bit of credit for even being in a position to write a business plan that has some gravity to it," Sebold said.

For Andren, and for possibly the future of industrial animal farming, while it may not smell of roses, this challenge is certainly worth stopping for.

Clarification: This story was updated on Sept. 8 at 1:50 p.m. to clarify ASU's current involvement with Lemna.