Historical inequities act as barriers to climate justice in Phoenix

"It just feels like one thing after another," state Sen. Jamescita Peshlakai said, her tone soaked in anguish as she described the painful realities of her constituents in northeast Arizona. She told stories she says her colleagues in the legislature can't fathom. Families living on the Native American reservation are experiencing consequences of climate change unique to the region, including the loss of medicinal plants, the destruction of vital agriculture and the smoky remnants of fires slithering into the arid desert.

The heat turns workers nocturnal, forcing them to work through the night and rest during the day to avoid deadly fatigue, and leaves Indigenous Arizonans living without electricity or running water.

"The only thing you can do is get a bucket of water, which you have to be very frugal with, and just keep dabbing yourself, and not move around too much as to raise your body temperature," Peshlakai said. "People are getting sick from heat exhaustion, but they can't go to the hospital because they’re afraid of the COVID-19."

After violent displacement and colonization, Indigenous Arizonans are made to build and lead lives in the harshest regions of the state with little rainfall, unforgiving heat and rampant food insecurity.

Although the adverse effects of climate change in Phoenix and across the state has remained in the policy spotlight for some time, communities of color are habitually neglected when it comes to mitigation efforts. Academics and dignitaries alike crafted ways for municipalities to counteract extreme heat and pollution, keeping in mind the pervasive presence of racial and economic inequities. But some say more needs to be done.

If they have access to them, utility costs for Indigenous Arizonans are extraordinarily expensive, said Wanda Dalla Costa, an associate professor in the School of Sustainable Engineering and the Built Environment. There remains a dire need in Indigenous communities for sustainable housing to save money and lives, she said.

Trying to find an attainable solution led her to Phoenix's Heat Vulnerability Index, a city resource that measures which communities are more perceptible to the effects of extreme heat. Dalla Costa found that Indigenous communities are considered "highly vulnerable" to severe heat because of the barren landscape of reservations, low levels of income and physical isolation between households, whereas wealthier, white communities are better equipped to live comfortably.

The Phoenix heat has become increasingly deadlier over time, said Dalla Costa. There were 323 heat-associated deaths in Maricopa County last year, up from 82 a decade prior according to an annual heat surveillance report released by the county. Additionally, the impact of the lethal Arizona heat is disproportionate along racial lines; Black and Indigenous individuals have the highest rates of heat-associated deaths per 100,000 residents. As average annual temperatures continue to increase across the Grand Canyon state, the scramble for climate relief and the number of heat-related deaths will only proliferate. 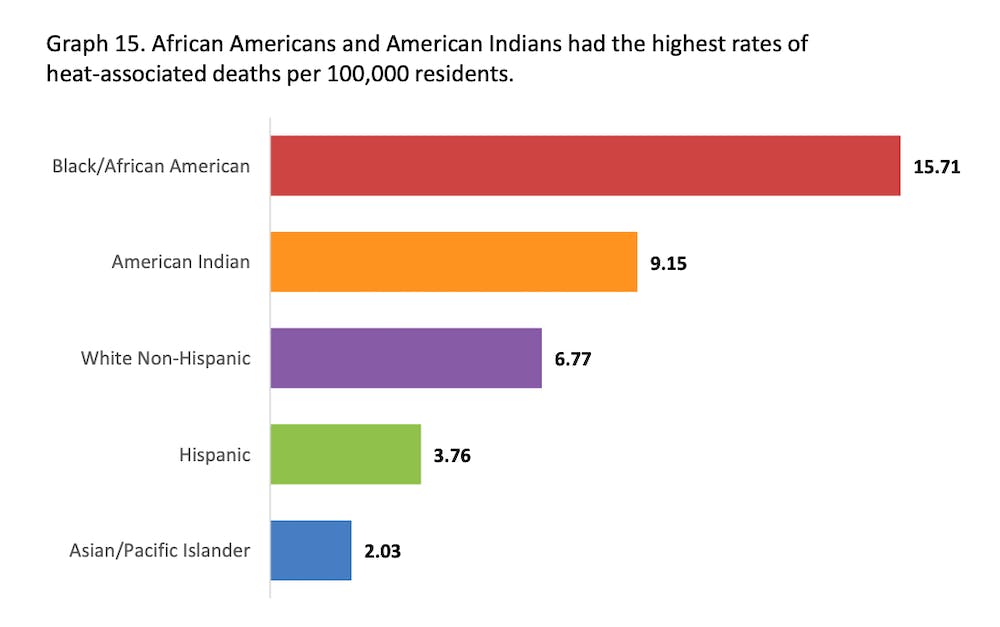 It may seem obvious why Phoenix is so hot, given that the metropolis is nestled in the Northern crook of the Sonoran Desert, but the vast city is also considered an "urban heat island." In the metro area, asphalt, buildings and other infrastructure absorb heat throughout the blistering day and release it at night, leading to significantly higher temperatures for urban areas compared to neighboring rural areas. Given that Phoenix contains nearly 5,000 miles of asphalted roads ripe for heat absorption and inevitable release, the city lives up to its status as a severe urban heat island. This effect is not unique to Phoenix, said Caitlin Moore, a junior studying sustainability, but Phoenix’s location in the heart of the desert amplifies the consequences of urban planning executed with little environmental foresight.

David Sailor, a professor at ASU's School of Geographical Sciences and Urban Planning and the director of the University's Urban Climate Research Center, explained how moisture in Phoenix from human-made bodies of water and the limited use of flood irrigation in a largely arid climate are anomalies. Cities experiencing a heat bubble tend to lack the vegetation and water to sufficiently offset rising temperatures by way of evaporation, Sailor said. Human activity, such as driving cars and increasing household energy consumption to combat rising nighttime temperatures, is another major contributor to Phoenix's heat island effect.

"There is a positive feedback mechanism between air conditioning and the environment," Sailor said. He described a cyclical relationship between heat and energy use; the excessive energy use required to find relief from the outside environment increases heat levels, creating an even higher demand for energy use.

This relationship between dire heat and the means for offsetting it amplifies the overall effects of global warming, Sailor said, resulting in seemingly minor increases in temperature with a high impact on the energy used to cope.

These compounded environmental woes, along with fumbling and myopic public transit across the sprawl of the Valley, led residents and outsiders alike to repeatedly dub Phoenix "the least sustainable city." Some have even begun to bleakly argue that the city serves as a dystopic vision of the future. However, the city government is implementing various measures to quell the effects of this phenomenon, including executing a tree canopy initiative, increasing the amount of cooling shelters and piloting a heat-reflective pavement program.

An urban forest, a body of vegetation intended to coexist with a city, has the capability to not only cool surrounding areas but help soil retain rainwater and improve overall air condition. The city's ambitious plan has failed to come to fruition, nor is it on track to meet its 2030 goal of providing canopy coverage to 25% of the city, according to reporting by Phoenix magazine in 2020.

Additionally, canopy coverage in Phoenix is largely inequitable along racial and economic lines with affluent, white regions of the city reaping the majority of shaded benefits as poorer neighborhoods — composed primarily of people of color — face higher temperatures with little to no refuge. Although it hasn't been fully studied, the allocation of urban flood irrigation, similar to vegetation levels across the city, could have subliminal links to race and class. Moore reiterated that this issue of prioritization of wealth and whiteness is not exclusive to Phoenix, that the pervasive "not in my backyard" ethos exacerbates inequities to a severe degree.

Reducing emissions from electricity use and transportation is one of the top priorities for Sandy Bahr, the director of the Sierra Club Grand Canyon Chapter, a grassroots environmental group engaged in work ranging from federal lobbying to educational programs. Bahr lists resilient communities, where social connection and adaptable infrastructure help those most at risk to withstand environmental issues like extreme heat, as an immediate necessity.

Environmental inequity is woven into Phoenix's city maps. Redlining, the discriminatory practice of denying a loan to someone who lives in an area deemed to be a financial risk, has resulted in disparities in air quality and heat levels across the city. Historically redlined communities are largely comprised of people of color and households of lower economic status — groups of people habitually designated to bear the burden of environmental volatility. Mackenzie Boyer, a lecturer in the School of Sustainable Engineering and the Built Environment, explained that, in her Introduction to Environmental Engineering course, she has students analyze air quality levels and temperatures in a redlined area compared to non-redlined areas to see how they fare. Highlighting how engineers have an opportunity to rectify the wrongs of the past through learning about how racial and economic disparities persist over time is critical, Boyer said.

Boyer said many are coming to terms with the racist history of this practice, pointing to the increased visibility of recent civil rights movements as a call to action on all fronts.

"But there's still so much work to be done, and so much to learn from this. And until we can fully learn from history, we put ourselves at risk of repeating some of these inequities," Boyer said.

This assignment, along with similar ones using varying locations across the nation, demonstrate how redlined districts tend to have higher temperatures and more dangerous levels of air quality.

"Redlining allowed home owners in the green zones to own a home and invest in their property, which includes planting trees," Boyer said in regard to the canopy tree initiative. "Whereas in the redlined neighborhoods, you don't have that level of homeownership because the people living in those communities couldn’t get the loans. So then you have higher rental percentages." Landlords don't have the economic incentive to plant trees, which would in turn reduce temperatures and improve air quality.

The need for resiliency extends beyond the debilitating heat, Bahr said, noting that persistent drought and worsening wildfires take a disproportionate toll on marginalized factions of the population. Bahr said she sees present-day Phoenix as a city failing to adjust its behaviors to fit its desert environment in ways it should: a metropolis that favors what Bahr calls "growth for growth's sake." Phoenix’s "continued push for excessive growth" inevitably makes the sprawling city less sustainable, Bahr said, although she notes that city officials are taking steps toward addressing the issue.

Recent reporting showed that Phoenix has grown at a faster rate than any other major city over the past decade. Many wonder how environmental initiatives will continue to play a role as households flock to the state. Bahr pointed out the "striking" affordable housing crisis in these development areas in a city that has continuously boasted about the abundance of inexpensive housing.

"We see, each year, more deaths from heat, people both inside and outside. People who are unhoused, people with limited incomes, a lot of communities that are predominately people of color, they're definitely most at risk," Bahr said. In addition, research from the National Climate Assessment demonstrated Indigenous communities across the country live in particularly precarious environmental conditions, Bahr said.

Displacement into desolate environments, rampant racism combined with the fight for water, electricity and a healthy environment left Indigenous communities abandoned and forced to survive despite the persistence of American colonialism, Peshlakai said. She stressed the need for political representatives who are intimately acquainted with the most vulnerable Arizonans. Of the 90 individuals in the legislature, only four are tribal members and six are members of the Indigenous Peoples Caucus, Peshlakai said.

Many of her colleagues are blind to the precarity of her constituents' lives even though they are among the most vulnerable to extreme heat, water scarcity, crop destruction and food insecurity, she said.

"Our challenge is always to educate our fellow legislators, but it always comes down to the bottom line, and that's money," Peshlakai said.