After passing through all four USG senates, the referendum will be put to a vote by the student body

The OSG has been advocating for its inclusion in ASASU to alleviate the stresses and concerns of ASU Online students, according to OSG President Kadison Willis, a junior studying sustainability and mass communication and media studies. Willis said people invested in online school are also invested in ASU, regardless of where they live or how they attend.

"There's definitely certain benefits that come from being official," Willis said. "The reason we wanted to form a student government is to have a place to advocate for online students."

Sponsor of the referendum and School for the Future of Innovation in Society Senator Izaac Mansfield, told his fellow senators that students attending ASU completely online, not just "remote," have no say in ASU policy or ASU student government.

"This is giving them their own seat at the table," said Mansfield, a junior studying innovation in society and computer information systems. "We are currently not able to provide that for them."

The referendum was put to a vote after a quick discussion period where it passed with 15 senators in favor, zero in opposition and one not present.

W. P. Carey School of Business Senator Sterling Sourk, a senior studying finance, said he was "really happy we get to see this legislation ... and I am really excited to see this passing." 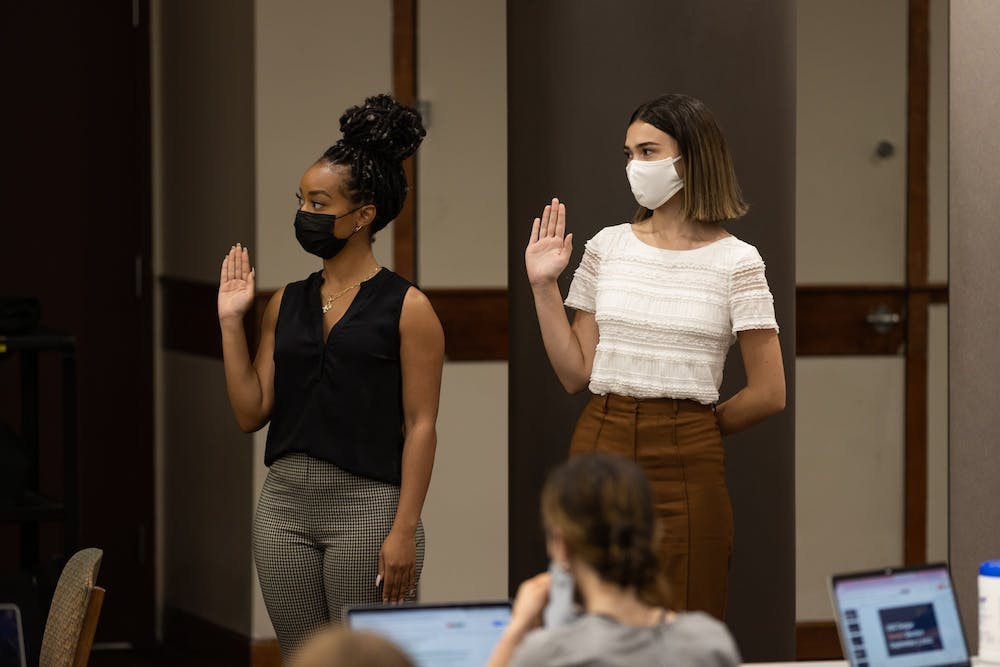 Rachel Porché (left) of The College of Liberal Arts and Sciences and Danielle Zanon of the W.P. Carey School of Business are sworn in as newly appointed senators.

OSG has been working with all of ASASU and the University since summer 2020 to be officially recognized for the purpose of "advancement through involvement." In the process, members have worked with advisers from ASU Online and on-campus academic and student support programs.

"I've been really grateful for everybody's teamwork and collaboration, there has been a lot of support from across the board," Willis said.

The vote count does not end on the USGT Senate floor – all other branches of USG must pass similar bills to officially recognize OSG. According to USGT's resolution, the Graduate and Professional Student Association passed its version on Aug. 21, 2021.

USG Polytechnic President Cecilia Alcantar-Chavez said her senate's next meeting is Thursday where they will vote on similar legislation.

Alcantar-Chavez, a junior studying mechanical engineering systems, spoke about the importance of recognizing OSG as an official part of ASASU. She said online students are in a "unique circumstance" and some don't even live in Arizona.

"I think it's important because they need a voice," Alcantar-Chavez said. "Their concerns and problems for an online student are different from an on-campus student."

Because their websites are not kept up to date, it's unclear when USG Downtown and USG West will pass the same resolution. Senate presidents did not reply to email requests for comment.

After passing through all four USG senates, the referendum will be put to a vote by the student body. Willis wants to assure students that officially recognizing OSG won't have a direct impact on USG funding or budgets.

"We get our funding from completely different places," Willis said. "There's no loss. We just want to be able to have a platform to stand on."

They voted no on Student Body President John Hopkins' nominee for USG Supreme Court. Nominee Rodolfo Garcia was struck down due to the senate's concerns with conflicts of interest. Hopkins and Garcia are both part of the Sigma Nu fraternity.

Members mentioned they were concerned with too many instances of recusal because of his relationship to the fraternity and the fraternity's presence in USG.