The Arizona Students' Association announced it is introducing a ballot measure to reduce tuition at Arizona's three public universities by requiring the state legislature to fund 50% of in-state tuition and fees or imposing an additional 2 percentage point tax on corporate income if the legislature does not comply.

At a press conference Tuesday, ASA said the As Nearly Free as Possible Act will establish a lock on in-state tuition and mandatory fees for four consecutive years and reduce resident tuition to the "cost of living" at each university.

The act's name is a reference to the Arizona State Constitution, which says instruction provided at universities in Arizona should be "as nearly free as possible," a provision that has sparked protests from students in the past and a lawsuit from Attorney General Mark Brnovich.

The press conference, held in front of Hayden Library, included a speech from State Sen. Martín Quezada (D-Phoenix), an ASU alumnus who pledged to advocate for the initiative.

"Because of these continuous increases, because of these budget cuts, more and more students every single day are being priced out of higher education," Quezada said. "Out of touch politicians down in the State Capitol see tuition and fees here at universities as numbers on a spreadsheet, they don't see those as the opportunities that these students have."

According to the Center on Budget and Policy Priorities, tuition has risen 92.4% per student in Arizona between 2008 and 2018. The state had the largest dollar increase in tuition since the recession in comparison to the rest of the country, according to the data analysis. The CBPP reported the average tuition at a public four-year institution in Arizona in 2018 was $11,210 per year. 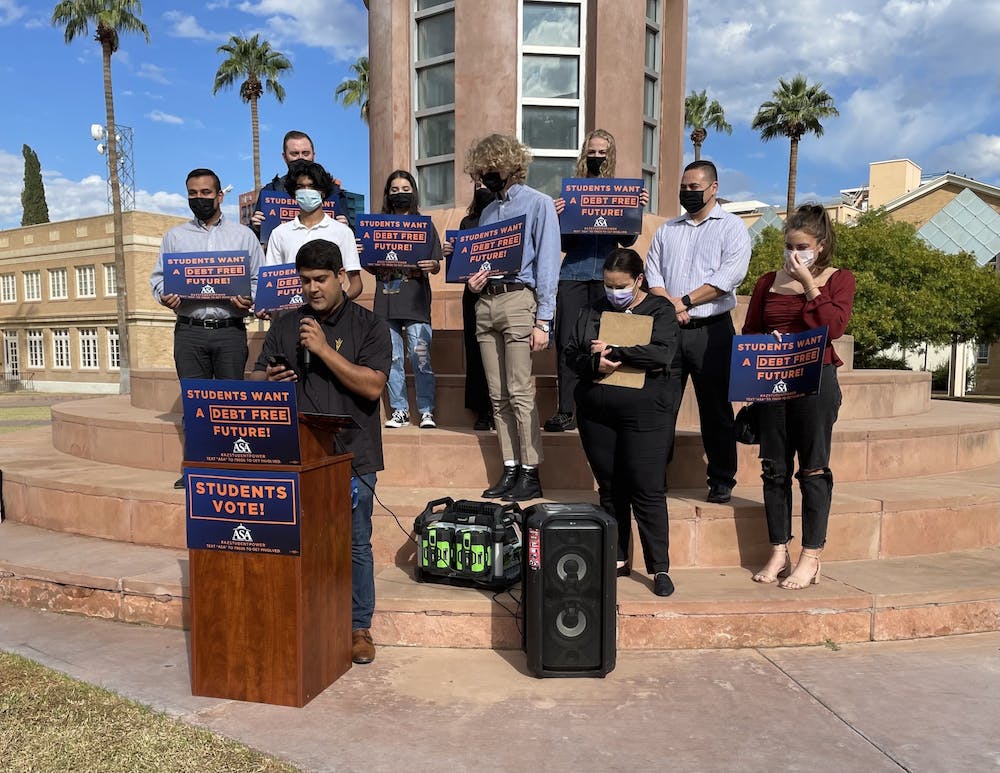 Cesar Aguilar gives a speech during press conference on the Nipple of Hayden Lawn on Tuesday, Oct. 5, 2021.

Cesar Aguilar, the executive director of ASA, said the group decided to write the ballot initiative after hearing from students who were frustrated they paid full tuition during the COVID-19 pandemic when classes were mostly virtual.

"We were trying to figure out what to do about this, and students were like 'why don't we just fight for the state to fund higher education so future students get to see their tuition go down,'" Aguilar said.

ASA, a non-partisan organization that advocates for university and community college students in Arizona, has been fighting for affordable and accessible higher education since 1974. The group sent a letter to the Biden administration in December 2020 calling for an increase to the Pell Grant and $50,000 in student loan forgiveness per student.

Armando Montero, the former director of ASU affairs at ASA and a junior triple majoring in political science, economics and mathematics, said this legacy of advocacy is what drove the group to take action in the form of a ballot initiative.

A ballot initiative, in this case, an initiated state statute, is written by citizens to amend a state's laws. To be officially added to a ballot, a group is required to obtain a certain number of signatures. Once signatures are collected and verified it will appear on every Arizonan's ballot.

"One of ASA's ... main goals is to really tackle that issue and bring down student debt, to bring down the cost of tuition so that all students can have access to quality, affordable education and that's exactly what this initiative is targeted at doing," Montero said. "The state legislature and the state has failed a lot of students on that end in not providing an affordable and quality education."

At the press conference, ASU students shared their stories and why the ballot initiative is important to them.

Julia Patt, a sophomore studying political science, spoke in support of the As Nearly Free as Possible Act despite being an out-of-state student from Missouri who wouldn't be included in the tuition decreases.

Daanish Daudi, the ASU campus organizer for ASA and a sophomore studying business, stressed the importance of acting swiftly to decrease in-state tuition.

Aguilar and Montero both said education is an especially important issue in Arizona and they see the signature drive and getting the initiative enacted as a fairly easy process.

"Maybe I'm just too young to see it, but it doesn't feel like this is the way it's supposed to be," Daudi said. "Education is necessary, my peers know that it's necessary, and something necessary ought to be as accessible as possible."