Last September, ASU was awarded $6 million from the state to develop a new, high-tech COVID-19 test, and a team of researchers with the University have produced not one, not two, but three new methods of testing, now awaiting approval from the Food and Drug Administration.

All three components were developed and delivered to the state in February of this year as per the requirements of the government grant.

The purpose of their work was to address multiple areas of concern with COVID-19 testing. This resulted in three components: a clinical form of a diagnostic test and two prototype devices, with one test built to sample in mass amounts and a mobile device designed to test individuals with both speed and ease.

Modified from a previous endeavor regarding the Zika virus, Green developed the high-capacity, rapid laboratory test.

The test has the ability to run 10,000 samples per day in multiple shifts with high accuracy, said project manager Steven Winn.

Green said the major modification to his previous test for the Zika virus was in speed, eventually reaching a point where all samples could have a clinically accurate result as soon as one hour.

Comprised of two components, Green's unique clinical test, known as a laboratory assay, amplifies the virus in a sample to make it more apparent. This sample is exposed to fast-acting sensors, giving a response in five minutes, whereas the Zika virus assay took about one hour, Green said.

A faster test means samples can be processed quicker, helping to avoid "bottlenecks of people waiting for their test results," and quickly identifying who needs to be placed in quarantine, Green said. 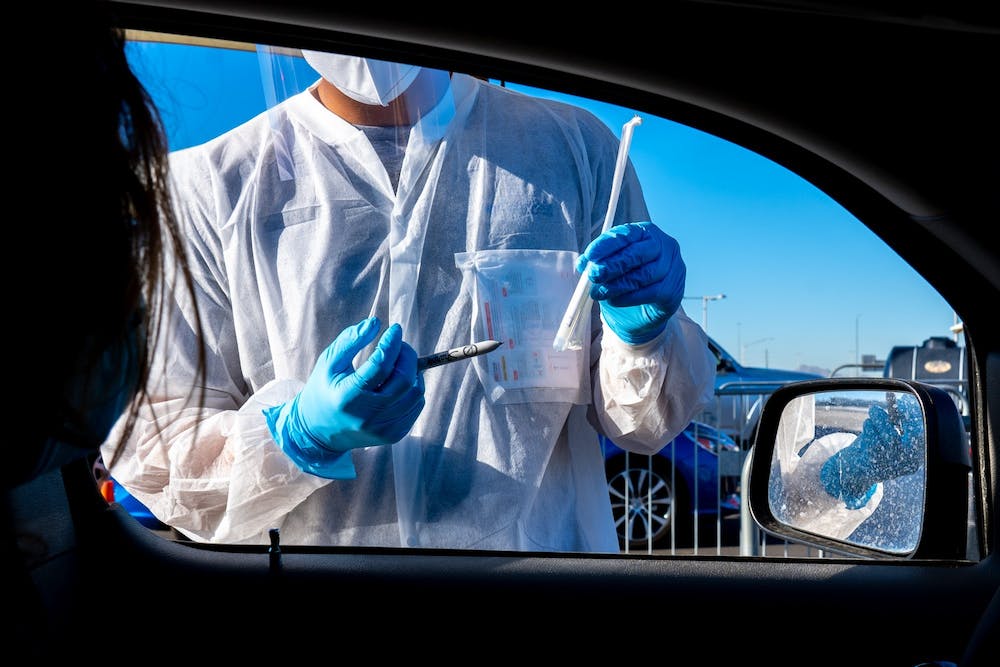 Hayes developed a device for mass testing, coined the "point-of-need" test. This model was manifested with large concerts or cruises in mind, as it can test mass amounts of samples within tens of minutes, Winn said.

In February, Hayes was successful in delivering a prototype device with the "specificity and sensitivity similar to what could be done in a lab," Winn said.

This device is based on, "a very inexpensive small filter, which concentrates the virus to a very high extent ... therefore you can very rapidly detect a small amount of (the virus)," said Neal Woodbury, vice president of research and chief science and technology officer ASU's Knowledge Enterprise.

Woodbury added "these filters could be changed to work for many different kinds of viruses" and they would "ultimately have a very inexpensive, simple way of looking at any of a large number of viruses."

This is a much smaller-scale device entitled the "point-of-care" test. This handheld test is designed to be very user-friendly, meaning nearly anybody could operate it and get results in minutes, Winn said. Blain Christen intends on aiding underserved, rural communities by making testing more accessible with this device, Winn said.

The point-of-care device would translate the results into one of three traffic-light results. Red: a positive case. Yellow: trace amounts of the virus. Green: no virus detected, said Winn.

Both prototype devices are salvia-based, the patient would spit into a cup and receive results in just tens of minutes rather than standard laboratory PCR testing which takes 24 hours, said Winn.

He that added both devices could also be equipped with Bluetooth technology, in which case results would be delivered in minutes to the patient's phone.

Since submitting the initial prototypes, the team has been working to refine them and collect the data necessary for FDA approval, Winn said. This includes testing the devices’ accuracy by running it in conjunction with established tests, like the current PCR method.

Once the tests gain FDA approval, the primary focus shifts to funding in order to make the test available to the public, Winn said.

"Now we need to attract people that want to help fund and make it a production scale, where we can make hundreds of these devices … we're going to need to have industry partners, or possibly foundation support for nonprofits, to be able to fund that," he said.

While the rambunctious coronavirus is slowly but surely being tamed by the rollout of vaccines, this project was manifested in part with the anticipation of future pandemics, Winn said.

Woodbury said perhaps a key feature of all of these tests is "they're all generalizable so they all involve technologies that don't just depend on COVID."